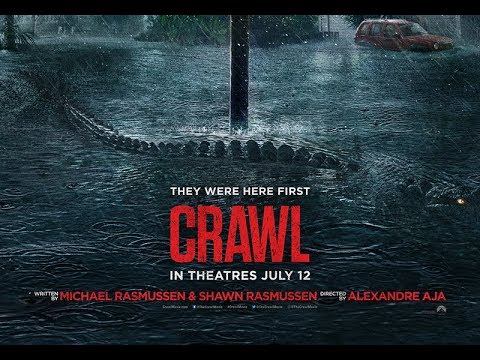 I like Alexandre Aja, generally. From the intelligent absurdity of High Tension to his very entertaining, big-budget ghost story Mirrors; from the misanthropic dark humour of his remake of Piranha to the straight-up horror of his remake of The Hills Have Eyes - which is the best damned big-budget remake of the original film imaginable - he's approached his craft with devotion to straightforward, image-based storytelling and a fairly knowing understanding of what horror fans find satisfying. I haven't loved all his films equally - Horns didn't do much for me, say - but I consider him a filmmaker to watch. He's not my favourite contemporary horror filmmaker - I'm not even sure I have a favourite contemporary horror filmmaker at present - but he takes his job seriously, and understands what it is, so I'll basically watch anything he does.

...And, you know, I like movies where people have to fight off marauding animals. There's a real primal satisfaction to it, which was hinted at in my interview with Dr. Carin Bondar a few weeks ago; there's also an oddly sadomasochistic pleasure in watching people getting eaten in horror movies - especially by animals. (I'm not a huge follower of cannibal cinema but I can both take sadistic pleasure in seeing someone get eaten by an animal and masochistic pleasure in the fact that I identify with the species being eaten; maybe there's some sort of tit-for-tat sense of justice that I experience as a failed vegetarian?).

So: Crawl. Crawl is great. Crawl attempts to do absolutely nothing with its story beside tell it; there's no attempt to politicize it, to moralize, to attain a deeper understanding of anything. It does what all the best survival horror movies do: it sets up its premise and plays it out, with plenty of scares and a fair bit of chewing of people, and otherwise stays out of its own way. It's alligators are, probably, all CGI - the film was shot in Serbia, and I don't think they have a lot of 'gators there - but they look good and behave quite a bit like real alligators. The story is simplicity itself: a woman, worried about her father, drives to his home in the midst of a hurricane in Florida to try to locate him. He's stuck under the house with an injury. There are, it develops, alligators coming in on the floodwaters. The two must find a way to fend off the 'gators and rescue themselves from the flood.

That's basically it. There's a little bit of character development, involving her ambitions as a swimmer and her father's past role as her coach, but no more than is needed for an effective genre film. You don't come away discussing subtext; you just enjoy seeing the story play out. It is not quite on the same level with Greg McLean's terrific Australian killer croc film Rogue, but it's damn near close. About the only caveat I'd offer is that there is a LOT of water in this film; since it's also fairly scary and stressful, you would be well advised not to drink liquid for an hour before it begins, and visit the bathroom before you go into the theatre, because otherwise your bladder will be fit to burst by the end.

That's it, that's all I have to say. If you like survival horror/ animal attack movies, or if you happen to be a big Barry Pepper fan, see it (I didn't know the female lead, Kaya Scodelario, though I gather she acted in that recent Berlinger Ted Bundy film, as well. I think that role required a bit more of her, in terms of conveying emotions other than, say, different flavours of terror). Both Midsommar and Crawl have made this a pretty good summer for horror movies, so far...
Posted by Allan MacInnis at 9:58 PM