Some pretty interesting programming upcoming at the Vancity Theatre. 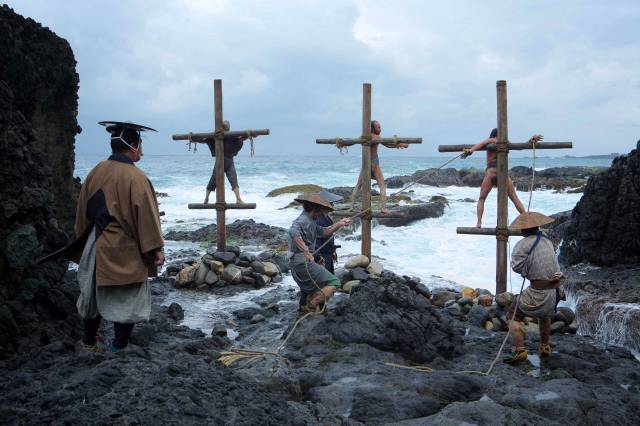 Starting this very week, there's a series devoted to David Lynch, including a new documentary about him and screenings of Eraserhead, Inland Empire, and a program of shorts. Talking Heads' frontman David Byrne is involved in a documentary about the waving of colourful flags (?). And Martin Scorsese's Silence is making a welcome return, based on a novel by Japanese Christian Shusaku Endo, whose action-oriented, existentialist version of Christianity will appeal to people too grown up to believe in the Big Santa in the Sky. I missed the film during its mainstream run and am delighted to have another chance to see it, this time in a theatre that will do justice to the experience. Truth is, I always thought the 19th century Japanese attitude of crucifying Christian missionaries made a certain degree of sense; they correctly perceived an imperialist threat lurking beneath the promises of redemption and salvation, and acted to stem it (in a kind of gruesomely appropriate way). Very curious what Scorsese does with this material - we gather it is nothing straightforward or comfortable. Various people seem to be describing it as his masterpiece... 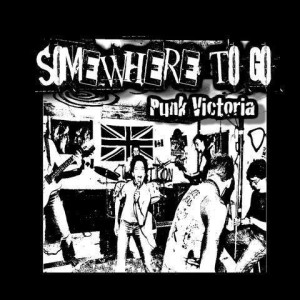 Screening soon after that, Canadian Film Week will feature, among other things, Somewhere to Go: Punk Victoria, which is making its Vancouver debut on April 14th. It's a concise, smart documentary on Victoria punk, focusing mostly on Nomeansno, the Dayglo Abortions, Red Tide, the Neos, the Dishrags, the Show Business Giants and Scott Henderson. with input from members of all the above (even Andy Kerr!). There's also quite a bit from Black Mountain's Stephen McBean, whose islander status (with bands like Jerkward) actually had escaped me; and interviews with Supreme Echo's Jason Flower - who curated the definitive scene anthology on Victoria independent music, All Your Ears Can Hear ; and Red Cat Records/ Showbusiness Giants/ Vengeance Trio man Ford Pier. Best of all, before the film, starting around 9:40 pm, the Vancity will be hosting a short musical performance involving Victoria transplant Pete Campbell, appearing with his current unit Coach Strob Cam. Pete says the band will work up some vintage Pink Steel and Wardells material for the occasion (and maybe the Sweaters' "Hockey Sucks," just for me). More to come on that: I believe 64 Funnycars' Tim Chan will be on hand, too, and maybe some other guests, none of whom actually appear in the film, but who could have! (Pink Steel does get namechecked, and the Wardells logo appears on at least one glimpsed gig poster). 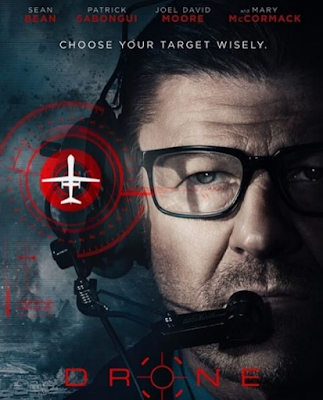 Also maybe noteworthy: Drone, with Sean Bean, is the new film from the director of Black Fly, a solid BC thriller which I did a feature on for the Straight awhile back. I remember thinking that Black Fly was a very promising drama, well acted and paced, but maybe with an unfortunate tendancy to be a bit literal (straining at a couple of junctures to include a shot or two of a fly, like they couldn't get away with the title unless a fly actually appeared on screen). I'm hoping Drone will have corrected for that tendency, but no screener is available; it certainly has a promising premise (a US drone operator confronted with the personal ramifications of his work... or something like that). 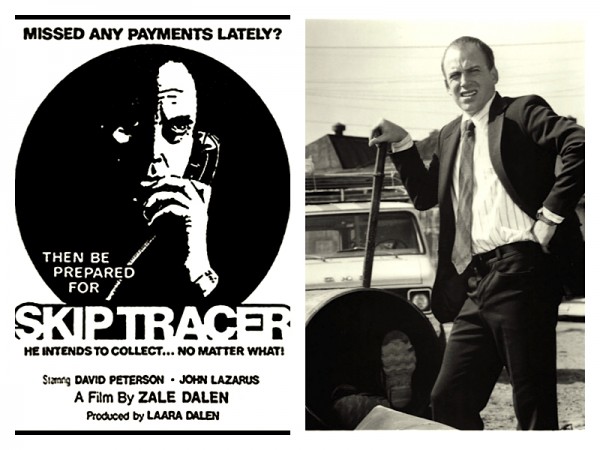 Canadian Film Week will then climax with a day of free screenings, on April 19th. First up, at 4:30 PM is shot-in-Vancouver, 1977 must-see Skip Tracer, directed by Zale "Terminal City Ricochet" Dalen - a straightforward low-budget noir with an appealing moral centre, chosen by Atom Egoyan to kick off the day. Students of the "shot in Vancouver" should make a point of seeing it at least once! 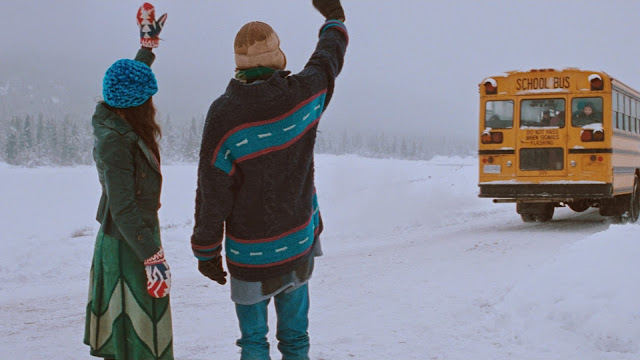 There will also be free screenings of Egoyan's own two breakthrough features, The Sweet Hereafter - celebrating its 20th anniversary - and then, finishing the night - after a panel discussion with Egoyan and the great Bruce Greenwood - there will be a screening of the film that stands as sort of "climax" of the director's formalist years, Exotica. Back in the day, I loved early Egoyan - the shameless, stilted self-reflexivity of Family Viewing and Speaking Parts, especially, appealed to me immensely, since meaning-making that would normally be subtextual is, in these films, extraordinarily, glaringly overt, practically ordering you to grapple with them as things to think about, not just things to feel or react to (which was how mainstream fare presented itself - moviemaking like Egoyan's was very welcome in the era of Rambo). I've found Egoyan's subsequent transition to mainstream filmmaking somewhat rocky, and have had mixed feelings about his output over the last while - I hated Devil's Knot and Adoration, in particular, though Where the Truth Lies and Chloe both were pretty successful, I thought (if not particularly "like" Egoyan). The two films screening on the 19th rather bridge the gap between his arthouse years and more commercial, narratively straightforward filmmaking, showing him with a foot in either camp. I haven't seen either for close to twenty years; it will be very interesting to see how they play to a current audience. 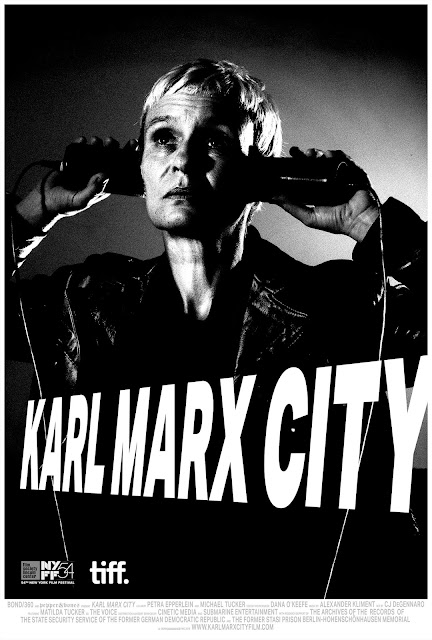 There's plenty else upcoming - a doc on Jane Jacobs, say - but so far I've only been able to preview two other movies, esteemed Polish filmmaker Andrzej Wajda's final film, Afterimage, and the documentary Karl Marx City. Karl Marx City is a very interesting film, and a bit of a corrective to onetime VIFF favourite The Lives of Others, with its "good Stasi" main character; in fact, the lie of that film - that there was such a thing as Stasi who covertly helped the people they were investigating - is explicitly addressed at one point in the documentary, which follows the filmmaker, armed with her ever present, big furry microphone, going back into her family's own past (and Stasi archives) to investigate whether her father, who eventually killed himself, in fact had been at one point a collaborator/ informant with the Stasi himself. The "real time" footage shot by the filmmakers is a very crisp, lovely black and white, while archive footage - including home movies - includes colour; it's an interesting depiction of a nation coming to terms with its totalitarian past, and one person trying to find the truth about her family years after the fact. 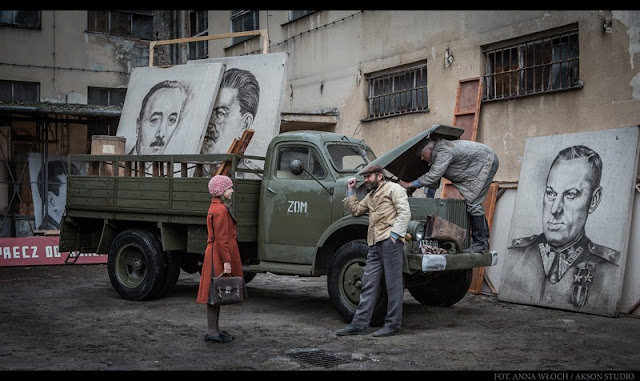 Also no stranger to totalitarianism, Andrzej Wajda died last year at age 90. He had remained active in cinema right to the end. I caught Wajda's 2007 film about Katyn, about the murder of Polish officers by Communists (who later tried to shuff the blame off on the Nazis); it was made when he was in his 80's, and was very engaging (even if a couple of its set pieces veered a bit towards the Spielbergian, I thought). It's striking to note that he completed five features since that film, of which Afterimage is the last; no saying he didn't drink the cup to the bottom. 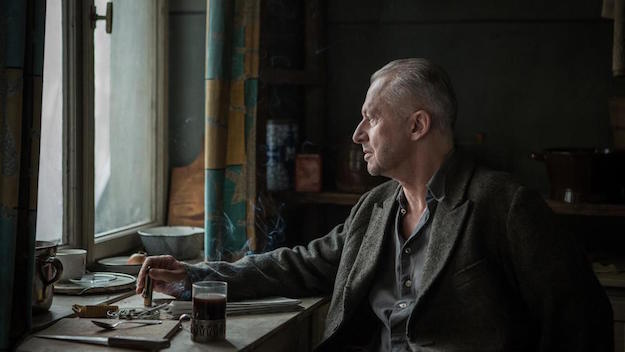 And Afterimage is a remarkable film. I can't weigh it against its historical subject, Polish painter and theorist Władysław Strzemiński, of whom I know utterly nothing, save for what I've seen in the movie; massive liberties might have been taken. But Wajda uses Strzemiński's story masterfully, to argue against state censorship and the imposition of an ideologically-driven, propagandistic "social realist" mode of art, whose function lies in cheerleading for the People/ State. One armed and one legged, and given to a passionate, unbendable idealism, Strzemiński - producing abstract, non-representational art - is deemed counter-revolutionary and gradually stripped of position, work, even the license to call himself an artist, such that he can no longer even purchase paint. The film itself is presented more or less in a social realist mode, and is obviously more interested in the politics at hand than the painting, but it's visually quite pleasing to watch (though the colour palette is cool and muted, something I've noted in Ryszard Bugajski's films as well; totalitarianism seems to be tinted vaguely blue). 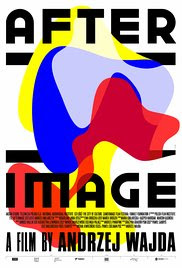 It's a lot of interesting cinema. Mostly what I'm excited about is that there's going to be another musical event at the Vancity Theatre, in the form of Pete Campbell (and Tim Chan's) performance on the 14th, in front of the Somewhere to Go doc. I will be talking to the filmmaker in a couple days, and hope to have more press for the event out there presently. For more on Pete (besides my big blog interview, linked above) see here. 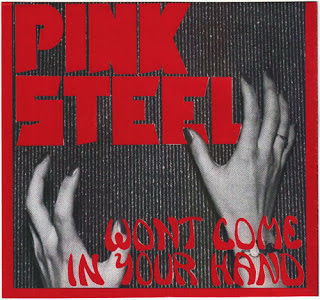 Posted by Allan MacInnis at 4:09 PM