My Mom and I, taken last weekend; I went for a haircut, and she got a perm: 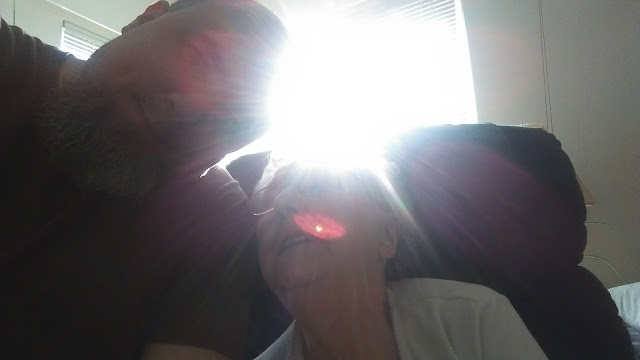 So maybe four or five days ago - maybe last Sunday, when I was still on IV antibiotics twice daily - Mom had a strange episode. She vomited, had serious chills, and wanted to go to bed really early. She ended up sleeping from about five PM til the next morning; if she woke up much before me, at 7:30 AM, I had no indication of it.

She seemed fine that next day. "Do you want to see the doctor?" "No, no, no!" Emphatic that it was just that she ate something that disagreed with her, etc. There were no further symptoms, though she complained about back pain from time to time, which is nothing really new for her.

When I called her around 11 o'clock this morning - actually using her to test my recorder setup before interviewing Tad Doyle (!) - she seemed fine. I went about my day: I was going to spend the weekend at the apartment in Burnaby catching up on writing projects, and visit her on Tuesday. After talking to Tad, I wrote an intro to the article I was planning, petted the cat a bit, and took a nice hot bath with epsom salts. I'm well behind on writing, with all my illness, and under deadline, but I was taking it slow, because my hands are back to being sore and swollen, now that I've ditched the prednisone.

Before I got back into writing, though, I called Mom, at about 3:30, and was shocked how bad she sounded. She told me, in her aphasic way, that she was very sick, was puking; I could hear her shivering and suffering over the phone. "I need you!" she managed to say emphatically.

I made the commute in record time, with help from a friend who picked me up in Coquitlam. The paramedics made it long before I did.

Sorry Tad, and sorry all the other people I owe writing to (except Orchard Pinkish; I can make time to post that, since it's an email interview and basically fully cooked). Mom is now in the hospital; it turns out she has some serious issues affecting both her gall bladder and her pancreas, is being given antibiotics, and is under consideration for a sort of minor surgery to release what they figure is a gallstone blocking a duct - something apparently complicated by her pancreas issues, however. I don't want to go into more detail but she's very scared and frail, is on IV antibiotics herself now, as well as painkillers, anti-nauseants, and so forth. I've come back to her apartment, cleaned a spatter of vomit off her bathroom floor, and am going to catch a few hours sleep before I head back there to be with her - bringing with me my old phone, full of her favourite songs, and her own pair of headphones, so she can listen to music while she's there. (She listened to a bit on my phone this evening).

Hope she's sleeping as I write this. She lost track of time when I was there, was "disappointed" when I told her I had to go, but then was shocked when I told her that it was 10:30 PM. I had had barely any food since breakfast, and I need a few hours of sleep if I'm going to be good for tomorrow. She kept thanking me, and apologizing, and telling me I was a good son, but no matter what I do, it feels pretty wrong being apart from her right now, I gotta admit, little as I relish the idea of a sleepless night in a chair in the ER. Her apartment feels utterly, horribly barren without her in it (and really uncomfortably hot, because she left the heat on in both rooms, maxed out).

Really hope she's going to be all right. And that I manage a few hours sleep...
Posted by Allan MacInnis at 12:19 AM

Wakened by shivering from hospital dreams in a very cold apartment; turning off the heat and opening the window has consequences, whaddaya know? I'm making Mom a couple of playlists, charging up my old phone (which I'm tryin' to teach her to use on her own) and packing her some word searches and myself some food (she's not allowed ANYTHING, will be fed by IV until she can be operated on). I could have slept more but its 6am and I want to get back there ASAP...

So 7am to 3:30 is a pretty decent amount of time to spend in the hospital, hanging out with Mom, who was mostly asleep anyhow. My hands are all swollen and sore from the reactive arthritis, in full bloom again now that I've stopped the prednisone; plus I'm exhausted, and I'm hungry. I've come back to Ma's, to eat and crash and maybe get some writing done (since visiting hours will be over by the time I wake back up). To tell the truth, I'm suddenly feeling a bit weird about sleeping here when she's actually not in the building (which a snoopy neighbour managed to get out of me, in the course of supposed chit-chat in the elevator, incurring a bit of hatred on my part for her idle, busybody ways; amazing how innocently and deftly she could pry information from me that was not her business in the fucking slightest, that Mom wouldn't want her to know, that I certainly didn't want to tell her, but, what can I say, I'm not a very deft liar: "Are you cooking Easter dinner for Mama?" Umm, not exactly, maybe tomorrow or the next day. "Why not?" Uhh, well, to tell the truth, she's having some health issues and isn't really allowed food right now. "She's in the building, though?" No, actually, she's in the hospital, but I'll be going back and forth, and by the way, fuck you, get a life of your own and live it and keep your idle fucking nose out of ours, thanks).

Maybe she meant well, but what can I say, I'm tired and hungry and exhausted and my resources for dealing with stuff are running out.

As for Mom, the final outcome is unclear - they're looking for a hospital that can perform a needed procedure ASAP - but Mom is responding well to treatment, is mostly just exhausted and weak (and a bit doped up). She's getting nutrients and antibiotics by IV and is mostly just sitting/ lying in bed, not very focused. I'm still unclear how I'm going to balance being there for her with writing and working, both of which I have a bit of this week, but... well, we'll have to see how it goes.

Fucking hell, this has to be the most dire season for me since the summer/ fall of 2009.

She's right. You are a good son. You're also invaluable to your Mom's health right now because you know better than anyone else what's normal for her. You're doing your best. Good man. Hang in there, pal.