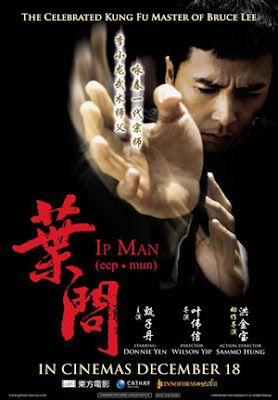 ...Well, actually, it's superb Hong Kong bullshit, but it really doesn't matter. With Ip Man 3 in the theatres now, and a friend whose opinions I respect recommending the original film (at first highly, and then backpedalling a little when he discovered I had actually gone out and bought the DVD), it seemed a good time to catch up with Ip Man. I have not seen Wong-Kar Wai's story of the life of real life martial arts instructor Ip Man, The Grandmaster, and come to the story in a state of some purity (which is to say, ignorance), because I do not consider myself versed in either Chinese or Hong Kong cinema, even kung fu films, let alone the lives of famed martial arts instructors. All I know of the actual Ip Man is that he taught Bruce Lee, full stop. But I keep seeing the DVD for Ip Man everywhere, usually on the cheap, and, with at least one recommendation having come my way, temptation finally overcame me.

Enter it without any regard for historical fact, and, as storytelling, Ip Man is just superb. (Even my 85 year old Mom loved it). It's about a respected martial artist, played terrifically by Donnie Yen - an affable, charismatic, and rather restrained actor with a knack for communicating through his facial expressions a gleeful, indulging bemusement at the absurdities of life - who defends and supports his community and sticks to his principles in a time of great hardship. Loshan, his town, is famed for its martial arts academies (and yes, the fight scenes are expertly staged by Sammo Hung, and are plentiful indeed), but when the Japanese invade in 1937, everyone is driven into either poverty or collaboration, and Ip Man, his family starving, turns to work in the coal mines. A Japanese general and martial arts enthusiast, Miura (Hiroyuki Ikeuchi) learns of his talents and - it's a bit more complex than this, of course - ultimately accepts a challenge to fight Ip Man, which is the climactic battle of the movie. You can imagine the suspense generated (mild spoilers follow): will the Japanese behave honourably and allow a fair fight, when one possible outcome is the shame of losing? Will Ip Man prove the indomitable strength of character of the Chinese over the ruthless, sadistic invaders? How will the film possibly have a happy ending, when Ip Man will surely be shot if he wins, and, uh, lose if he loses?

If you don't get the sense that there's at least some potential for patriotic bullshit going on here - tapping into and exploiting  lasting Chinese/ Hong Kong hatreds towards the Japanese, inviting audiences to rally around the film as if it were a flag - then the end titles will probably clue you in, for instance when (if the English subtitles are accurate) they talk about the Chinese victory in WWII, after the Japanese surrendered. Someone completely ignorant of history (which sometimes seems to me to be "anyone under 30") would assume that the implication is that the Japanese surrendered TO CHINA, which is not, um, exactly the case. I mean, nice try, but...

Then there's the "historical inaccuracy" section of the Wiki on the film (knew there was going to be one, didn't I?). Turns out that the wealthy Ip Man was never forced into work, let alone in a coal mine; and of course, he never fought a Japanese general. The climax of the film is wholly fictional. If there's anything accurate at all about the first half of the film, it's completely effaced by the second half, which basically offers a complete falsification of a real, historical figure in the service of a flag-waving team building exercise. Propaganda, I say! Utter crap!

But what great crap! This is a wholly engaging and entertaining film, no less so when you discover what it is. Having seen so many mendacious bits of falsified American flag waving in cinema, it's actually pretty amusing to see the Hong Kong/ Chinese equivalent: think Rocky IV for the kung-fu crowd. I can't wait to see part two, tomorrow, also with Mom. My only misgiving about dragging her along on my Ip Man explorations is that we can't watch the film in its original language, since she cannot begin to process subtitles (I have to read them aloud to her, line for line); the dubbing is, thankfully, not the worst I've encountered. You can get the first two Ip Man films at HMV, if you're so inclined, along with a third unrelated film about Ip Man, as part of a DVD box set that sells as one of their 2/ $20 packages. Not a bad deal at all!

Here's hoping Ip Man 3 lingers long enough in the cinemas for me to get around to it...
Posted by Allan MacInnis at 2:19 AM

Aha, part two takes the action to Hong Kong, and the bad guys are the Brits (mostly), with the showdown occurring during an East-Meets-West boxing match (so the Rocky IV thing is even more germaine). Presumably the only historical detail of any accuracy is that Ip Man did move to Hong Kong... It's maybe not quite as fun as the first film, but if you get a chance, the dubbed version is pretty entertaining, since they make some very fun choices for different characters; it's some of the most colourful dubbing I've seen. A fat thuggish gangster type is given an improbable Brooklyn "fuhgeddabout" drawl; various young Chinese hooligans have British 'loogan accents, and, funniest of all, the older Chinese women are voiced in English by, get this, OLDER CHINESE WOMEN, with accents! Ip Man continues to speak a polite, mellifluous American English, so chaos really reigns here. It's also pretty amusing that, for scenes where there are English-speaking characters onscreen, and language issues are relevant, they shift back to Cantonese (I believe it is), such that most of the Chinese spoken in the dubbed version of the movie is by the white actors, such as the ones playing the referees in the fights! (They translate their own Chinese, so it would look pretty ridiculous if the Chinese was itself dubbed; they'd be delivering every line twice!)