He Never Died: dumb fun for smart people, plus, bingo! 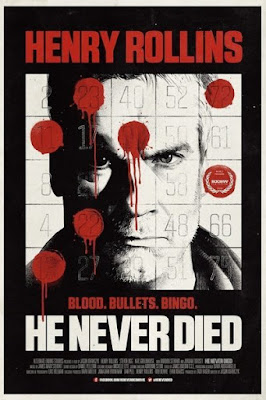 I'm not sure whether He Never Died is supposed to be regarded as a comedy, but it sure played that way for me. It came out on video this week - bizarrely being stocked at HMV in DVD-only format, like it's somehow unworthy of bringing in the Blu. I've been waiting for it, so I grabbed it, watched it, and liked it (and laughed) a lot.

It's probably not possible to write about the film without including spoilers, but I'll briefly try, just to sell you on the premise: the draw here is Henry Rollins, in his biggest and best film role yet (fans of Rollins should read my piece on Morgan's Ferry, here. Based on He Never Died, I hereby take back my comment that "Hank can't act," though, you know, after having seen Johnny Mnemonic, The Devil's Tomb, and Morgan's Ferry, it wasn't exactly unjustified). Henry plays Jack, a man with a serious case of world weariness, who sighs, naps a lot, and plays bingo to kill time. He doesn't have a job or friends or any apparent purpose in life. He has scars from what is, apparently, the removal of angel wings on his back (the DVD box art actually features angel wings, and you see the scars three minutes into the movie, so I guess it's no spoiler to mention them). Also, he has a bad habit that requires him to clandestinely buy certain items, the nature of which the film does not immediately give away, from an intern at a hospital. Somewhere he runs afoul of some mobster types and ends up at war with them. Various secrets are revealed, getting gradually more ridiculous as the film gets progressively more violent. Before you know it (spoiler! Skip the rest of this paragraph to protect your purity of experience!), he's pulling bullets out of his forehead with pliers and snacking on human fingers, none of which entirely prepares you for the "big reveal," which is his true identity. 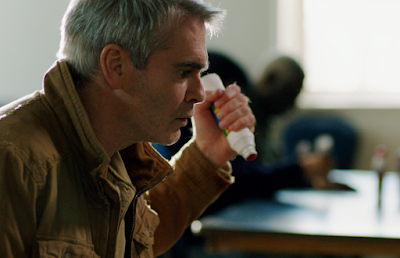 The trailers I've seen all contain spoilers a bit bigger than that, so I don't really recommend watching them, if you haven't already. If you'll trust me, that's really all you need to know to enjoy the film. I sure did. It's the perfect vehicle for Henry, one of the more intense humans out there, playing someone desperately trying to keep his intensity under control. The ideal audience will be amused by the very premise of Henry Rollins playing bingo; surely this film has the best use of bingo as a plot device since Bruce McDonald's Highway 61...? With a nod to Uwe Boll's Rampage, of course, except that bingo is far more incidental to that film's story - though it warmed my heart that Boll revisited the bingo hall for the Rampage sequel, mourning that it was now closed. (It's about three blocks from where I now write this).

(That very bingo hall is now a film studio, by the way; I actually inquired of Mr. Boll whether it was he who bought it, but no, it is not. Is it weird that I wrote about Uwe Boll's use of the bingo hall in Maple Ridge in the same post where I reviewed Morgan's Ferry, linked above? Some sort of psychic foreshadowing of Rollins' future involvement in a bingo movie?)

I only have two caveats, both minor: the director, a relative noob named Jason Krawczyk, hasn't quite mastered the craft of thinking in pictures - the grammar of cinema, if you will - so occasionally, scenes that should make perfect sense are momentarily - but only momentarily - confusing because a shot that should have been included isn't; you need to extend him a little goodwill and accept that you can "see what he was thinking" even if he didn't quite get it onto the screen. But that's a minor quibble: I mean, the Soska sisters, bless'em, are even worse than he is at this sort of thing, and everyone loves them, including me, so what the hell. Hopefully he will continue to grow as a filmmaker; he's certainly got the ideas to be a lasting player. This is one of the most entertaing "obvious cult hits" I've watched in years.

The second caveat is that, while more or less satisfying on its own, the film obviously is a set up for a miniseries or TV programme or film franchise or something; it leaves a LOT of story left unexplained, and has a resolution that, while perfect, is clearly designed to leave you wanting more. But that's fine with me, because, yes, I do want more; the premise is so goofy and unique and likeable that I for one would LOVE a series based on this character (but of course only if Rollins plays him; this is the film role that he was born for, folks).

The hell didn't HMV get this in on Blu-Ray? 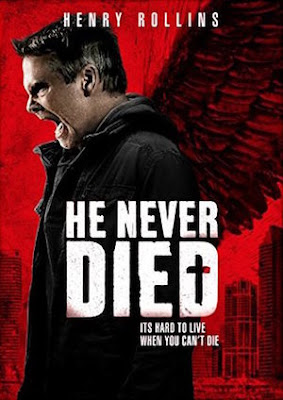