Well, that was a fun night. There were issues, of course - most serious among them being that the first hour ran so smoothly, changeover-wise, that the lineup got ahead of itself, leading to long delays later, as organizers patrolled the venue, trying to find performers who weren't expecting to go on half an hour early, and musicians began to appear out of sequence, based on an apparent logic of "who is actually here now and ready to play." Eventually things got, uh, caught down (ie, the opposite of "caught up"), but the delays later and the late night meant that, yes folks, with a forty minute commute ahead of us and the start of a cold brewing in both our throats, my girl and I ducked out just before the Vampire Bats were due to go on, and, sin of sins, missed Ron Reyes.

I got to say hi to him in the bathroom - he had a sore throat, too! Hope he acquitted himself well - I really, really would have liked to see what Ron's fearsome (if virus-laden) pipes would have done, faced with the challenge of singin' songs by a remarkably different singer.

In any event, understanding that I only caught 3/4's of the night - because we had to duck out for a bit in the middle, too - the highlights of the night by me boiled down to three bands. With apologies to Tim Chan, none were bands he was in; I like Tim a lot and wish China Syndrome a fantastic "first full gig of the year" at the Princeton later tonight. I *did* enjoy Pill Squad and China Syndrome, but the three bands that blew me away were: 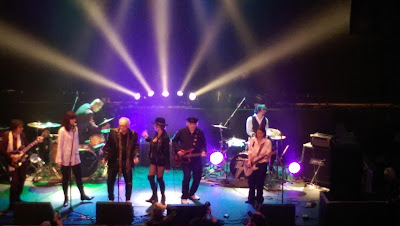 a) Eddy D and the Sex Bombs, left, who, I gotta confess, I did not expect would be as polished and perfect as they were; dunno why, but I expected something loose and slightly under-rehearsed, maybe akin to Sister DJ's Radio Band (who I also like a lot, don't get me wrong). But no, they were slick and tight, and I still have their take on  "Sound and Vision" echoing in my head as I type this. Not bad for a guy who didn't like Bowie!

b) TrailerHawk. I like Tony Balony - Tony Walker - from what I've seen of him, having caught him at the Vancouver Complication reunion gig maybe ten years ago, with Rude Norton and otherwise, and having watched him survive being the guy called in to take over for Art Bergmann on guitar for Art's comeback show at Richards a few years ago. I know he's a fixture of the local scene, but for some reason, I was still ill-prepared for TrailerHawk, who did a terrific country-roots-rockabilly interpretation of three Bowie songs. The first two didn't get caught in the memory-sieve, alas, being overshadowed by Tony's shockingly Dylanesque vocal on Mott the Hoople's "All the Young Dudes," one of a few songs from the Bowie penumbra not actually performed by Bowie (Left Spine Down also did a version of "Some Weird Sin," and Jim Cummins, later in the night, sang a song that he wrote for Bowie, not a Bowie song, before commencing to do a live painting at side-stage, but "All the Young Dudes" was a truly inspired choice. Somehow coverin' Iggy felt like a bit of a cheat tho' - Bert Man sang "China Girl" at some point, too, tho' since Bowie actually covered that song himself it felt more okay). For the record, I actually think the women in TrailerHawk did better, smoother, easier to listen to readings of the Bowie songs they sang, but Tony still kind of upstaged them. I'm not sure if I like what he did but to hear Ian Hunter done by way of Bob was just so startling...)! 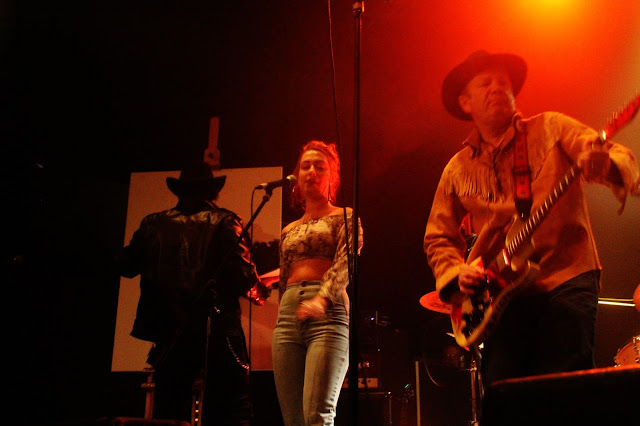 TrailerHawk by bev davies, with Jim Cummins in the background, not to be reused without permission

By the by, Jack "Fucking" Keating told me that TrailerHawk have a full on gig on March 11th, which is alas the date of a different gig I'm committed to (Devil in the Woodshack and Still Spirits - also roots music of a sort). I have no idea what the venue was supposed to be, tho').

Oh, and since I mentioned Art Bergmann, people realize that Art is going to play the Commodore in May with Gerry Hannah and the New Questioning Coyote Brigade opening? More on that later, maybe. 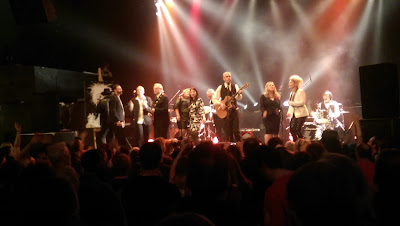 Anyhow, though, the third band - c) - that blew me away was one of a long line of local bands that I have been allowing myself to neglect: Orchard Pinkish. (His backup band were not "his Horny Hands" but "the Old Canadians," ha, ha). Haven't seen Richie since I last caught him, I assume with the Little Guitar Army in Maple Ridge in 2012, unless he wasn't in the band at that point; I don't recognize him in my photos of the night, but they're not very good). Again, I don't know why, but I expected nothin' that impressive, nothing that stood out and ruled the night. But oh, boy, was I wrong: the band's readings of "Heroes," "Young Canadians," and "Fame" - with Cass King taking over vocal duties - were astonishing, beautifully arranged and delightfully performed, the real "let's get this party started" moment of the night. Orchard's voice was perfect for Bowie covers and Cass King was just amazingly charismatic. If I feel a bit sheepish about not having seen Orchard Pinkish before, I feel shocked at never having heard of Cass King, before she started weighing in on Facebook on the burlesque kerfuffle, now deleted; she has some associations with burlesque, I gather, but despite a low-cut top, it was her charisma and singin' that stood out. Shot video of that, the only vid I took of the night besides a little bit of footage of David M. busking; it will hae to wait a bit before I upload it, tho'.

Anyhow, those were the three best bands of the fifteen-to-twenty acts I took on, but there wasn't a thing I didn't enjoy. Great night. Had a lot of fun watching Jim Cummins paint, too.

Oddly, I had a dream that seems to relate to it all, and the whole "music versus burlesque" issue, just before I sat down to blog: that I was in a school (or something), and conspiring to organize a secret orgy in one of the unused classrooms (I should note that the school was not the one I actually teach in!). There was a room across the way where someone - actually Joey Shithead, I think - was instructing some inquisitive fella in Vancouver punk history, playing him records from a stack that I had previously perused (not a single band in the pile was an actual Vancouver band, as I recall; my brain just made shit up, as it often does, fudging details in dreams). I pitched in a bit, but then snuck across the hall, with a group of six or seven others, where we had been told by someone that we could probably get away with covert sex on a bunch of cots that were in the room. There were some Mexicans in the hallway, sitting on a bench, who could figure out what was going on through the semi-translucent glass wall (!), but they were kinda keeping it down, maybe because they wanted to see what we did. But just as we all quietly slipped out of our clothes, getting onto the cots and such - tho' I was curled up on the floor - some OTHER naked guy walked in, not associated with our group, and proceeded to lie down on one of the cots with one or two of the girls, almost like nothing was happening. We all pretended to be asleep, but his presence was definitely disconcerting - we were apparently in someone's dormitory or such!

That's all I remember of the dream, though I think right at the end I was being "discovered," caught out, naked in the corner as people came toward me. Then I woke up.
Posted by Allan MacInnis at 9:22 AM

Thanks for the review!