They Say Die, Some Say Racism. You Say... 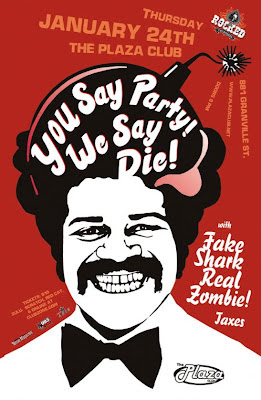 Hm. Three bands on this bill, apparently; I don't know Jaxes or Taxes or whatever the least of them is supposed to be. You Say Party, We Say Die!, the one time I saw them live, were energetic, hooky and professional, but nonetheless fairly derivative of pop musics past (I thought of the early Manchester scene and British pop-punk/"New Wave" of the 80s), and not particularly exciting to me. Despite having sniped them in the Nerve for stepping on Femke, I can appreciate the snottiness of Fake Shark, Real Zombie! a bit more - their gender-bending spastic ripoff of the New York Dolls (with a pinch of NY No Wave thrown in) seems sincere enough, since the kids in it are probably living a devoted, drugs-'n'-debauchery rock lifestyle - and the fun they have on stage is reasonably infectious. Still - I don't really care. Neither band is as boring as the New Pornographers, say, but they're definitely on my "skip this gig" list.
Other than registering that there were two bands I didn't want to see on the bill, tho', I barely blinked at the poster. "Some black guy... grinning... looks vaguely familiar... bomb in his hair. Hm." My mind drifted when I saw it to a Last Poets song, "Black Rage," which likens angry black youths on street corners to "bombs waiting to explode," or something like that. Probably if I'd realized that I was looking at an exaggerated caricature of Isaac from The Love Boat, I'd have been amused: Isaac wants to explode. Well, who doesn't? Odd for a buncha white kids to use this image, but insofar as the invitation seems to be to "explode along with Isaac" -- that we're invited to identify with the "rage" of the once-servile, now bomb-bearing, black man, returned from his token-happy-darkie status on The Love Boat to get some payback -- I don't think I would have been particularly offended. There's enough overt, uncomplicated, obvious racism around - and, possibly thanks to the influence of the snotty/ironic humour of South Park (which I have a love/hate relationship with), enough confusion about where lines should be drawn or what should or shouldn't be taken seriously - that a gig poster such as the one above basically just gets filed under "weird urban noise," and forgotten.
Some people are having a harder time of forgetting it. A friend has been trying to convince me by email that it's a racist image, pointing to the ways Isaac's facial features have been distorted (which I didn't notice, initially, because I didn't realize it was Isaac) and the connection between the bomb-in-Afro and the bomb-in-turban motif of those offensive Danish cartoons of Mohammed (which I also didn't think of at the time.) Now, like I say, in the current melieu, I have a fairly hard time figuring out what ANYTHING means: are those Danish cartoons themselves even racist? I can see why they're offensive to Muslims - for whom even representing the prophet is a blasphemy - but they seem to be in a different league, say, from cartoons of yore (which, alas, I cannot find online) mocking the various Indian immigrants who tried to enter Vancouver on the Komagata Maru in 1914, back when Canadian law was set to keep them out. Those cartoons mocked the refugees seeking shelter here as dirty undesirables, and seem outrageously offensive and shameful now -- the act of a priviliged majority sneering hatefully at an underpriviliged minority and asserting their superiority. Given the degree of intolerance and oppression in the name of religion that groups such as the Taliban have wrought - to say nothing of the violence of Al Qaeda - and the extent to which, in the worst excesses of political correctness, certain stripes of liberal strive to censor both themselves and everyone else, stifling free discourse with a demand that everyone conform to their definition of what is tasteful and sensitive, at the very least, the Danish cartoons seem to have a point to them. Should they be defended as an act of free speech, or should their perpetrators be assassinated like Theo van Gogh? There's at least some grounds for discussion. But what the fuck does it mean to stick Isaac from The Love Boat in Mohammed's place, though? Goddamned if I know. If there's a point to this image, OTHER than creating jarring noise and attracting cheap attention, I don't see it, and without having the slightest clue what the image means or was intended to mean, it's hard for me to call it ANYTHING: racist, offensive, whatever. For all I know, whoever designed it was a person of colour, listening to the Last Poets, and wanting to stir up shit... I'd be very curious what other people make of it, tho'. I'll be soliciting comments from friends - but anyone who reads this is encouraged to post!
I'll say this: my friend's emails have definitely got me thinkin'. Am I just another complacent whitey, so secure in my position of privilige that I can't see racism staring me in the face...? Hmmm...
Posted by Allan MacInnis at 7:46 PM

I say if you're looking that hard to find racism then you're looking too hard to find racism. I'm in the band Taxes, and we've been approached on the subject. Suffice to say none of the bands were involved in making the poster, the topic is fairly moot. Like you said, what does anything really mean anymore? Perhaps it has achieved its purpose already, that being the act of conversation.

Would people raise a fuss if it was a caricature of Captain Stubing (Gavin McLeod)? Well, they should. He is a bald man and bald men have been oppressed enough. Tho the image of a smooth pate turning into a bomb would be a great one and a great call to arms!!!! I sense a follow up poster.....

He Who Killed The Darkness said...

Yeah, fuck that. I love that poster. It makes me think fondly of all the African-American funk and soul music that has enriched my life since birth. Afros are the shit. The bomb's gotta be on someone's head and everyone has a race. They'd probably call it racist if it was a white guy with a bomb afro 'cause only black people are renowned for afros. Like Orr said, people are looking too hard to be offended. IT'S FUCKING ART, YOU ASSHOLES!!!

I'm about done with the politically correct.

Sean - Sorry I couldn't tell if that was a T or a J on the poster. Taxes it is. The thing is, I think some people are IMMEDIATELY responding to this as racist - it doesn't necessarily mean that they're LOOKING for it, tho' if you've been on the receiving end of racism of one form or another, I'm sure you'd be more sensitive to it, than, say, priviliged white folks (like, say, myself).

Bill - Gavin McLeod as a bombhead? Now what would THAT mean? Hm...

The Man - Interesting that you think of funk. I don't know about Taxes but there ain't much funk in the main acts that night. Sounds like you also get a positive association out of the poster. The thing about it being "art," tho', doesn't mean very much. Art can be racist, offensive, etc. Saying something is art and therefore immune from criticism is a strange argument - Joseph Conrad's HEART OF DARKNESS is unquestionably a work of art, but has been long criticised as a racist work.

Heh. I read both your comments. I liked the original one, which you deleted, more, because I had no idea what it meant, and thought you had a fine future in politics ahead of you...

He Who Killed The Darkness said...
This comment has been removed by the author.
8:10 AM

He Who Killed The Darkness said...

Yeah, but the other thing about art is it's often totally left open to interpretation. If you want to see racism in that poster or Heart Of Darkness, that's what you're going to see. If they were actually racist, you wouldn't have to look so hard to find it (VICE Magazine, for example, is often blatantly racist, while Eminem sure doesn't sugar coat his gay-bashing). Like Chris and Sean said, it's the PC police that try to read that sh!t into everywhere it isn't instead of actually dealing with the roots of racism, sexism, homophobia, and all forms of inequality. Did you know Santa can't say "ho, ho, ho" in Australian malls now because it's offensive to women when used in gangsta rap? They actually want Santa to say "ha ha ha." It's getting ridiculous.

Gak! I guess it would have been helpful to me to hear all the arguments your friend put forth...or perhaps you did encapsulate all the salient points. .. I have a really hard time looking at things like that and calling them racist....but then, your question keeps ringing in my ears...do i not see racism in the poster because I too am of privileged white folk who can't even see racism being depicted right under my nose...cripes! I didn't even think "black guy" (I didn't think "white guy, or Chinese guy, or Muslim guy either) I just saw a guy with big hair...then the bomb a bit later...ok...we're going to have an explosively good time if we go to this concert....and, oh, yeah, maybe these guys are trying to make some kind of point about suicide bombers, but I don't know what it is...and anyway, is commenting on the fact of suicide bombers a racist act? They exist, they tend to be Muslim...of course not all Muslims are suicide-bombers for Crissakes, but do we muzzle ourselves from commenting on the fact of their existence because it might be called racist? Basically Allan, I'm confused, and don't really have an opinion one way or the other, except to say that I think there are more important things to worry about (Oh, no, is that just because I'm a privileged whitey that I can say that? Oh dear!)

Allan MacInnis said...
This comment has been removed by the author.
10:05 AM

For the record, I posted the original thing without the participation or permission of my friend, so I felt shy about putting up her arguments. I didn't fully understand them, either, I admit, which makes it fairly hard to do them justice. Anyhow, that's why her POV isn't so well-represented. I kinda hoped she'd post here.

Looks like there's not a lot of debate that's happening. In case anyone is wondering, I *didn't* just send this to a buncha white folks - and I'd be happy to have someone take issue with me in public. It's starting to feel like we're circling the wagons here...

Somebody needs to look up the word "racism" in the dictionary.