So I've not been blogging much. If anyone is actually waiting, watching, feeling impatient and annoyed, I admit that I still haven't gotten to Blake Nelson, Keith Parry, or Bev Davies -- other than what already saw print in the Nerve Magazine, that is; I've had too much going on, pieces for pay, commitments to friends, family stuff, etc. If it makes you feel better, I also owe Razorcake a couple of pieces I've long been promising (my Rebel Spell interview will run in their next issue). There's other stuff I'm working on that I can't go into at the moment. Which leaves us here -- me, you, and my blog. I have the time, but not the energy or inclination, for transcribing tape, so in lieu of that, let's consider a few upcoming movies, shall we?
I'll be seeing Todd Haynes' remarkable and creepy film, Safe, at the Cinematheque, this week. Anyone interested in cinema should see it, though there's a chance it will annoy the hell out of you (friends of mine sometimes have that reaction, and I don't think less of them for it, though I do think MORE of the film for this). It's about an upper-middle-class woman (Julianne Moore, in the role of her career) who becomes "chemically sensitive" -- "allergic to the 20th century," I believe is the line. Her family indulge her, suspecting she's just gone loopy, but her insistence that she is sick becomes the beginning of a sort of rebellion, which leads her to a New Age self-help retreat (which is really more than you should know, already, so if this catches you a virgin to the film, just go and see it, without reading anything else on it, okay?). Audiences reacted in such different ways when the film initially ran at Sundance - some badly misunderstanding what Haynes intended - that he actually changed later prints of the film; there's a one minute sequence where Moore and husband briefly consider the home of the leader of the retreat in the second, which was used for the Japanese video release, as well as post-Sundance US showings. Not sure which version the Cinematheque will show. I think I can safely describe this as the most important and exciting American film of the 1990's - I certainly value it more than any of the work by Jim Jarmusch, John Sayles, or Gregg Araki that I'm fond of from that decade. 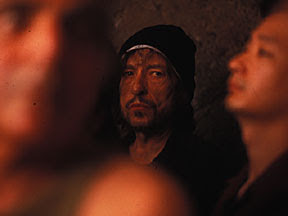 Also in regard to Haynes, I'm actually kind of pleased that I'm Not There is not ready for them, and is beign replaced with Masked and Anonymous. That film baffled and annoyed me when I tried to watch it on video, but I feel quite excited about taking another run at it. It'll even be in a double bill with Haynes' Velvet Goldmine - another movie I didn't like much at first, that I'm eager to reappraise.
That's about it that really excites me at the Cinematheque for the next couple of months (unless you want to take your kids to Spirited Away on February 10th, that is; it's a delight, tho' listings are not yet online for it). Hara Kiri, upcoming in February and also not online, is a great film, and well worth seeing if you haven't checked it out - it's more of a devastating attack on bushido and the hypocrisies behind Japanese feudalism and class structure than it is a swordplay venture - but other than that, I think I'm ready for a five year moratorium on samurai films in the city. If you haven't seen The Seven Samurai, Yojimbo, Sanjuro, et alia yet, this really is not my problem.
Meanwhile, at the Vancity... well, actually, their February program is not yet online. Autohystoria, from the Philippines, sounds kind of interesting, but I haven't been there for a scandalously long time (and I see that I am missing a Cinema Salon screening of Billy Wilder's Double Indemnity tonight. Nuts! I love Billy Wilder!). I wonder if their new program is out in the print version? Hm, I might just take a walk.
Friends and stalkers, meantime, are encouraged to keep their calendars free for March 15th. I'll have a VERY SPECIAL film event going on for my 40th birthday, the details of which -- film and venue and such - you're more than welcome to ask me offline. Trust me, you'll want to be there.
Posted by Allan MacInnis at 8:02 PM

Email ThisBlogThis!Share to TwitterShare to FacebookShare to Pinterest
Labels: movies

I’ve gone to a few of the Ousmane Sembène series at Vancity; most have been good but the one that really blew me away was Camp de Thiaroye, which plays again this Sunday (Jan. 13). The film is compelling from start to finish; it concerns a number of African soldiers at a transit camp in Senegal in 1944, and the French officers who run the camp.

I saw Safe in 1995; I didn’t really like it but for some reason I still remember the scene where Julianne Moore tells the doctor she is a ‘milkaholic’. Out of curiosity which version did the Cinematheque screen? I haven’t seen Poison so I might go to that on Sunday or Monday, not sure.

I’ve never really been into samurai films; as for the rest of the Cinematheque program, I saw The French Guy at the film festival a couple of years ago and barely was able to sit through it; I don’t know why they’re bringing it back. I do want to see some of the Canada’s Top Ten series, especially Denys Arcand’s latest, L’Âge des ténèbres.

They played the post-Sundance Safe, with the shot of Peter's house. The print is so-so (tho' nowhere near as bad as what happened with Kurt Cobain: About a Sun; the version they were sent had so many problems on the soundtrack that they resorted to playing the "screener" copy of it for certain portions, with some weird visual distortions as they flipped back and forth. I ended up glad that I didn't care that much about the film, since it definitely was intrusive to try to watch it in that condition). (To return to SAFE,) There's a two minute section that was totally pinked, and a noisy/flawed soundtrack. Still, it was great to see it again, and I brought my irreverent Russian friend and her mother - both hostile as you can get to New Age platitudes - and had great fun watching them nearly burst into laughter, while everyone else in the audience seemed pretty hang-dog. Todd Haynes would have been amused by their reaction...

Might see you at POISON if I don't do the Sembene.

That’s interesting about Kurt Cobain About A Son; I was there the other night and noticed that it seemed to be DVD quality at the beginning, but I didn’t think much of it, considering that the movie was pretty weird to begin with.

Heh. Actually, you got it better than I did - they actually had warnings ("For Screening Purposes Only - Property of ______ Films") flashing on the screen half the time!