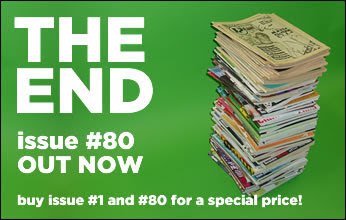 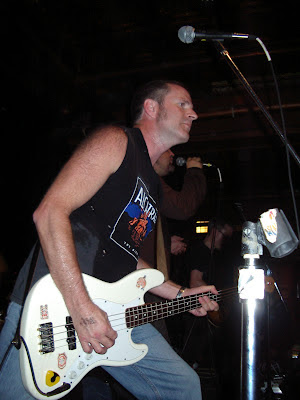 My Subhumans article has finally come out in Punk Planet #80. It is the FINAL ISSUE of the magazine - it is gone. The reasons why are best explained here, I'm sure, on their official site. It has much to do, if I recall, with the collapse of their distributors, and I'm sure the uber-Darwinistic, culturally impoverished social climate doesn't help. All the same, given the following -:
a) their lack of enthusiasm about the Subhumans (the word count was ridiculously small, given the band's significance and the sort of material I had, and they stalled the article twice and plum forgot about it for awhile) -
b) their frequently irritable demeanor whenever I pitched things at them or had questions
and c) the fact that only 3 of 12 articles in the magazine are actually about bands - which was much the same last issue, as I recall -
- I'm not that surprised. I'm DISAPPOINTED; whatever my gripes, they're a good, solid, serious magazine, and it's sad that they're going down. It's also sad that I won't be paid - this is the second time that this has happened to me, in fact, since I had a piece on Zev Asher's Casuistry in the final issue of Terminal City. I don't actually care about the money - I have done HUGE pieces of writing about subjects and bands I love for free - but it's still irritating; the money (small, but symbolically a nice token of respect) was, I admit, one slim factor in my not giving it to a very different and much better US punk zine I sometimes write for, so it's annoying to see the promise of cash turn to shit... Tho' in a way, given my unpunk cash grab, I suppose its fitting (sorry, Todd!).
In a way, though, I'm happy for the Subhumans - because I suppose the fact that this is the last issue might just draw a bit more attention to THEM. Which is what this SHOULD be about. Let's just hope they're still planning on playing/recording together again... great fuckin' band.
PS: Punk Planet, if you're unhappy I've borrowed your banner, do let me know. It's good advertisment for your site, but if you want, I'll take it down if you pay me the sixty bucks you owe me. Or whatever it was I was gonna get.
Posted by Allan MacInnis at 1:43 AM

I am sorry that your article got chopped and you were not paid. It seemed that what was left of the article had little to do with the Subhuman's music and more to do with Gerry Hannah's personal history and whether or not the band would be able to enter the States.

A cynic would argue that for any interest to be generated in a band there has to be a "sexy" angle. Ex: they have to be young and sexy or failing that there has to be some kind of gimmic angle, for example, mental illness,drug addiction, suicide or a prison sentence. Those things make sexy copy. Don't you just love the music biz?

Anyway, good bye to Punk Planet.
A bunch of progressive magazines died or suffered major financial loss as a result of the Independent Press Association going belly up.