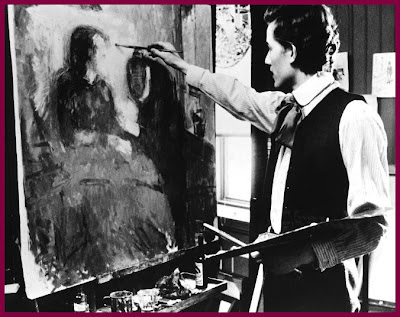 Peter Watkins' Edvard Munch is a very intense film, and one of the few "lives of the artist" films that I really admire. Too often, films about painters, writers, and musicians trade in cliche and romanticism: we are meant to feel awe at the artist, to see him or her as larger than life, better than the rest of us by virtue of their talent, such that "we" - the average schlep that the film is supposedly addressing - can feel a condescending comfort and unadmitted relief at the "tragedy" at their inevitable demise. I didn't care much at all for Pollock, say, or The Wolf at the Door, about Gauguin, which both seem cut from that cloth; and while they're not guilty of cliche to quite that extent, Jarman's Caravaggio eluded me for the most part, and - well, it's been a long time since I've seen Vincent and Theo, but I don't recall it being THAT moving an experience. Two films about painters that I've seen actually deal with the artist on a one-to-one level, trying to come to terms with their experience as people and their desire to paint; Love is the Devil - which is brutally honest and sufficiently unsympathetic to its subject that Bacon's estate refused to allow the filmmakers access to the man's paintings; and Watkin's Edvard Munch (which you can read about at the director's site, here). It's quite long, and not much fun - it's all tuberculosis, class struggle, self-struggle, and misogyny (of a relevant sort - I mean, there's a character based on Strindberg in it, for instance... though Watkins does seem to get inside Munch's ambivalences about women and communicate them in a rather personal way). I remember a musician I know telling me that the experience of watching this film was so grim, it put him off European arthouse fare for quite some time. Ingmar Bergman has praised it, though, and... well, you know by now if you're interested in seeing it or not. It's an experience I'd recommend for those with a strong constitution - Hyperboreans, Nietzsche would call us, the wanker. Plays at the Vancity Theatre Tuesday and Thursday at 8:45 - DO NOT ATTEMPT TO SEE IT IN A DOUBLE BILL!!! I'm not kidding.
Posted by Allan MacInnis at 7:51 AM