Subhumans at the Lamplighter, Oct. 13, 2006, plus Monkey Warfare note

So there I am crouched at the front of the stage, alcohol spilling on me, the occasional mosher jostling me or flying full on into my lap, and I'm tryin' to take pictures with a digital camera that I've borrowed off a friend and don't understand how to use at ALL. I have not been warned beforehand that the exposure time is really really LOOOONNG, and the band stubbornly persist in MOVING, so picture after picture comes out looking a bit too abstract expressionist for my tastes: 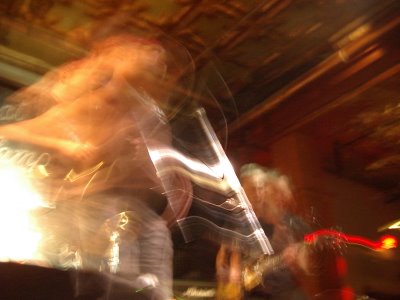 Some of these are kinda cool (and one or two end up lookin' really good, by sheer chance, but I'm hopin' to use them elsewhere, so I can't very well stick'em here). Gerry, photographed thus, ends up lookin' kinda like some sorta tough guy, like he could be played by a young Clint Eastwood -- I mean, dig the chiselled facial features on this one: 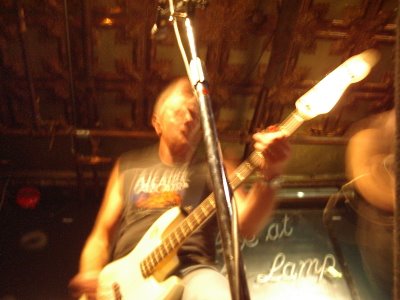 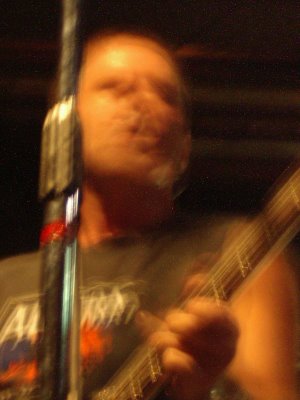 They're kinda ROCKSTAR, despite the blurring, but the problem is they don't really look very much like Gerry! ...Anyhow, eventually I figure out how I can get shorter exposures; the trick is, there's this long unpredictable delay between when I push the button and the photo is taken. This makes the results of any attempt somewhat unpredictable: I end up with a great shot of Brian Goble, with his Insite t-shirt clearly readable, for instance -- but his head is missing. All the same, I manage to get a couple of reasonable, but not great shots -- of Jon: 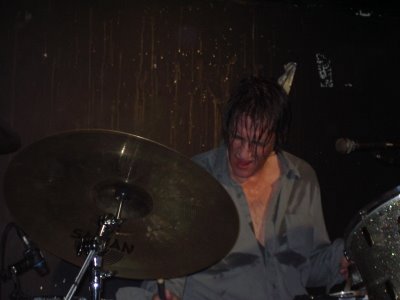 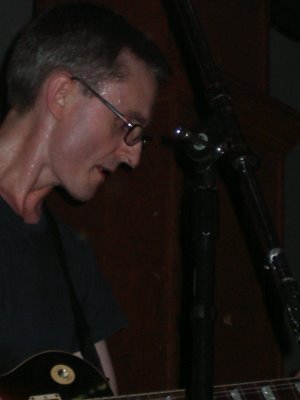 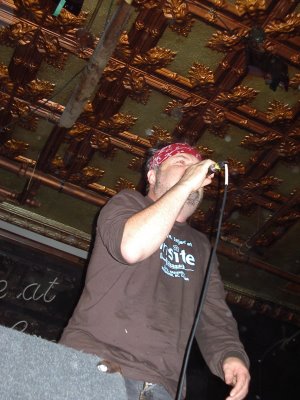 And eventually, shots of Gerry that actually LOOK like him: 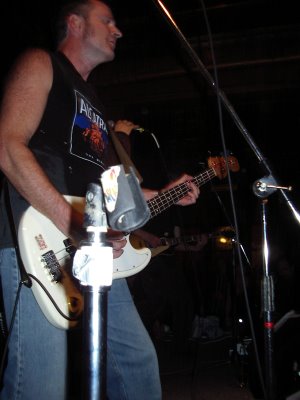 Sometimes shots that could have been fantastic are just a little too blurry: 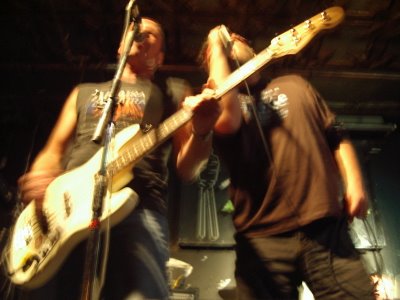 But all told I'm happy with about six pictures, and may have a source for others. Sorry to stick my unusables here, but they're better than nothin' (and better than about another 30 completely worthless snaps I took).

By the way, there's a wry, intelligent, engagin' little film coming out soon that touches on some, er, peripheral history that I think people interested in the Vancouver punk scene (or concerned about activism) would really want to see: it's called Monkey Warfare, stars Don McKellar, and is directed by UBC film school graduate Reg Harkema. He's now based in Toronto -- that last link is from the Eye -- but he says the film is an "East Van movie at heart." Harkema has some very fond memories of his days on the early punk scene here; we didn't figure out any gigs we were at together but there must have been one or two... Check out my upcoming interview with Reg in next month's Discorder (which, for those of you downtown, reliably turns up at Scratch Records), and keep an eye out for the film -- it's a must see, if you were interested in th' above.

Posted by Allan MacInnis at 9:55 PM