Gordon Mumma and Matt Rogalsky at the Scotiabank Dance Centre 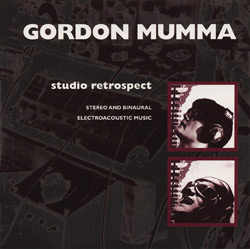 I love volunteering at Vancouver New Music events: I've gotten to meet some very interesting people by doing so. I spent a couple of hours with Paul Dutton at the 2004 Vox Festival; he eagerly told me all sorts of details of his history as a performer, with Koichi Makigami occasionally weaving in and out of the conversation, sometimes doing weird spontaneous vocal improvs. I first met Maja Ratkje at that festival, starting a dialogue we were able to strike up anew when she and Hild came to town for the jazz festival. Last year, I was privileged to pester Fred Frith a bit (sorry, Fred!). This year, it looks like the merch table conversation of note will have been with Gordon Mumma.

Mumma's bio is here; he is one of the pioneers of electronic composition in America, designing his own instruments and, in the 1950s and 1960s, working with David Tudor, John Cage, and many others. He'll be doing something Cage-related with Vancouver born (but now Ontario-based) composer and performer Matt Rogalsky tomorrow at the Scotiabank Dance Centre, as part of the Silence Festival; I'd be more specific about the nature of the performace, except that neither he nor Rogalsky really know at this point what they'll be doing, either! After a brief chat about William S. Burroughs (a "survival source" in grim times, Mumma called him -- someone whose humour and irreverence and bravery were a source of great inspiration and fortitude), it turned out that Mumma's best story revolved around the Italian Marxist composer Luigi Nono. We were talking about vinyl fetishists -- that is, record collectors -- and I told him a rather fun story told to me by a guy named Brad about his attempts to secure a rare recording by Nono. It turned out that Mumma knew Nono; they were friends, having met at the Venice Biennale. Commence anecdote:

In 1964, the Boston Opera Company, under Sarah Caldwell, were looking to perform Nono's opera Intolleranza, a multimedia work that "attacked racial segregation and nuclear weapons" (it apparently provoked a riot at its 1961 Venice premiere). They wanted Nono to be present for rehearsals; he applied for a visa and was promptly refused, because, as Mumma put it, the US state department "thought he was gonna overthrow the friggin' government." Though very much a left winger, Nono was no particular friend to the USSR, and had long engaged in smuggling forbidden compositions in and out during his tours there -- they were almost as scared of him as the US; but his politics were radical enough to have him branded as an undesirable, no less. This was quite unfortunate for his wife, Nuria Schoenberg Nono, since she was hoping to visit her mother, Gertrude -- Arnold Schoenberg's widow -- in Los Angeles; she, too, was denied a visa. The Boston Globe apparently ran a headline that read, "State Department Says No No to Nono," whereupon several artists, intellectuals, and sympathetic politicians -- including Edward Kennedy -- began to protest, until finally Nono was allowed brief access, with strictly regimented flights to Boston and LA and then back to Italy, so that he wouldn't have the time or leisure to agitate. All of this is fresh in Mumma's memory because he has been digging through his correspondences with Nono for donation to the Nono Archive. (He expressed sympathy for Nuria Schoenberg Nono; between her husband and her father, she has two pretty daunting estates to manage!).

We then went on to talk about him discovering tapes of a performance of David Tudor's "Rainforest" in Rio de Janeiro, with Mumma and Todor and the Merce Cunningham Dance Company, in the summer of 1968. (The booklet notes, minus the photos, can be downloaded here). This is on a recent CD that he's brought to town with him (he did mention that elements of Thursday's performance will resemble that composition.) I am greatly enjoying the Mumma I brought home, Electronic Music of Theatre and Public Activity; I'll probably pick up another of his CDs tomorrow. Matt Rogalsky's CD I have no idea about as yet -- I haven't heard it -- but I always liked the man when I knew him around SFU. He seems to have established himself in the world of avant-garde music -- I'm looking forward to finally hearing him play.

A final detail about Gordon Mumma: he's now local! Or close: he lives in Victoria, having left the US for a more politically comfortable environment (and for other reasons). He doesn't perform that often these days, he said -- but I've dangled the offer of an interview someday, if I can get our local papers interested (what the hell, I got Terry Riley in the Nerve Magazine). By the way, a photograph of Mumma, Luigi Nono, Robert Ashley, and Nuria Schoenberg Nono, taken in Venice, can be seen here. (I had incorrectly identified this photo in an initial version of this article as having been shot in the USA, but Mumma has written in a correction: "No connection or meeting with the Nono's was possible during their USA visit, due to legal restrictions and the constant monitoring and tracking of them by the FBI.")
Posted by Allan MacInnis at 12:25 AM