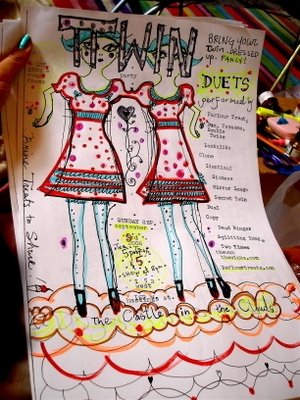 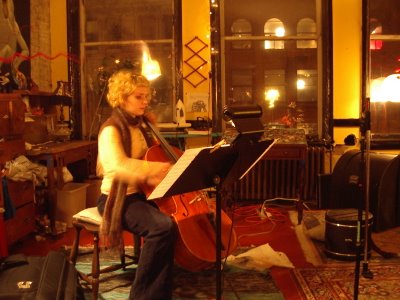 (Photo of Tyr hard at practice at Castle in the Clouds. Photographer: Dan Kibke) 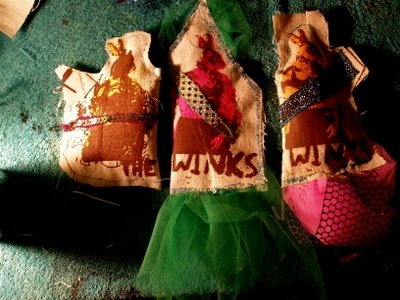 (Winks dolls by Tyr and Jasa, to be sold at Castle in the Clouds and the Only Magazine Block Party)

I sorta promised Tyr I wouldn't write about tonight's gig at Pat's Pub, but I have to say that, as the fog of time envelops my varied Winks memories, seeing Adrian sprint across the dance floor for the drum kit will surely remain clear... And if Todd had bent that F any further, it would have gone right past G to H. A fun, if anarchic, gig.

You realize (I hear address a particular cellist I know, but anyone who wishes can wear the mantle of "you") that the Winks are leaving for Montreal, right? You are running out of opportunities to see them, at least in the forseeable future. They will be doing an evening of events, with other artists, at their performance space, Castle in the Clouds (152 West Hastings), on September 3rd, which is apparently not yet up on their website. The theme is Twins (duets, to follow the "masturbatory" solos of August), and you are encouraged to bring a twin; Jasa, Tyr's sister and partner in Parlour Treats, will be on hand, so also bring shopping money for clothes, or Winks dolls. It's not just for girls, either. Men can buy special ties. I may. I highly encourage everyone to see the Winks in their natural environment.

The night before, September 2nd, it is also worth notin' that the Winks baritone saxophonist Tim Sars -- who is not leaving for Montreal -- will be playing at the Princeton Pub with his own project, the Orange Monkeys, which he describes as "kind of dirty reggae funk." The lineup sounds special -- sax, marimba, percussion, drums (!) and a bassist... I think I may check it out.

The next night, meanwhile (after the Twins gig on the 3rd, which is to say, September 4th), there will be an Only Magazine release party with the Winks and Jasa in attendance, also featuring the Doers and others... See their live shows page for more. On their email list, the band comments that "It will be sad to leave such a supportive scene," but the band are very excited about the opportunities that await them). They also inform fans that they "will be having a last show September 15th at a to-be-announced venue."

I'm working on a Discorder story on the band but it's been beset by technological flubups, so I dunno exactly what it's going to end up like... It's been a tough month. Things are still percolating and will hopefully become coffee by my deadline. Thanks to the Winks, for their patience! I will miss you, Winks! Godspeed in Montreal!
Posted by Allan MacInnis at 12:34 AM