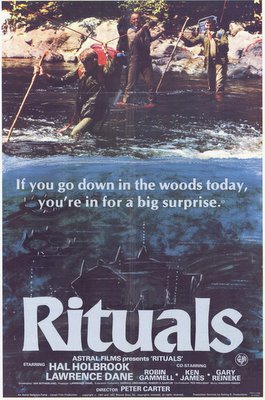 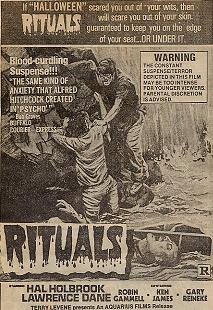 Ooh! I've known for awhile that there was going to be a series of Canadian horror films playing over Hallowe'en at the Vancouver International Film Centre, but it never occured to me that they might screen Rituals (that's the link to the Vancity program; read more about the film at IMDB, here). I remember it as a creepy and intense variation on the "urban/rural" horror theme, one neglected in Carol J. Clover's really stimulating look at that genre in Men, Women, and Chainsaws: Gender in the Modern Horror Film -- excerpts of which are found online here. Usually compared to Deliverance, it follows four doctors on an outdoors adventure that goes, um, wrong. The copy from a variant poster reads, "In a world turned suddenly savage, the answers have become -- brutally simple!" It's been a long time since I've seen it, but the genre (with its workings-through of class resentment, guilt, and atonement) fascinates me -- see also, Hunter's Blood, Pumpkinhead, The Hills Have Eyes, or even last year's unpleasant and reactionary, but fascinating Hostel (which substitutes quaint Europeans for crossbred hill people, but plays on similar themes) for more. Clover's look at the genre is largely inspired by her consideration of I Spit on Your Grave, as part of her overall treatment of rape-revenge films. It's worth a look, for background; I have yet to read Caelum Vatnsdal's They Came from Within, which no doubt also deals with the film, but I've just discovered it's considerably cheaper to order it from Amazon.ca than Amazon.com; Caelum will be introducing the film. Oh, by the way, the film boasts some terrific performances by Hal Holbrook (who I was always fond of) and Lawrence Dane (the double agent in Cronenberg's Scanners). Mark your calendars now, so you don't get distracted by the film festival...
Posted by Allan MacInnis at 7:33 PM