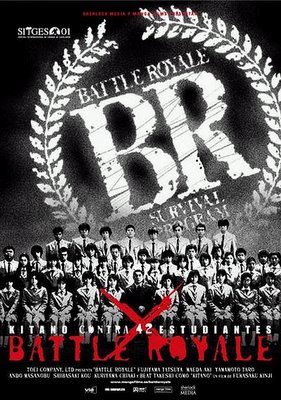 Hey, folks... we'll be playing that most charming of antiauthoritarian dystopian exploitation films, BATTLE ROYALE, followed by it's ridiculously confused (but jaw-dropping) sequel, BATTLE ROYALE 2, at Blim on August 18th, starting at 8PM. The first film was the last completed feature by Japanese action auteur Kinji Fukasaku (also famed for THE YAKUZA PAPERS). See this month's Discorder for the Cinema Aspirant article on Fukasaku and be sure to pass on the news. My Blim events have been attended by next to no one!!! I will perhaps soon abandon ship!!!
Posted by Allan MacInnis at 12:15 PM