Paradise Now poses a problem for the Academy 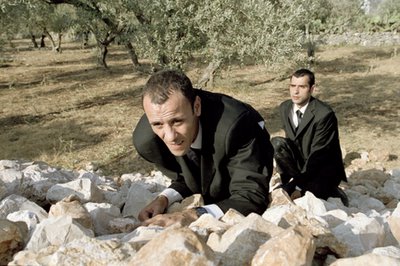 You can read my reactions to the sympathetic portrayal of Palestinian suicide bombers, Paradise Now, by clicking here. The film has resurfaced as an Oscar contender, but a problem has arisen: given that Palestine doesn't actually exist, what country should it be said to come from?

It will be odd if the film wins an Oscar; it’s surprising that it’s been nominated. What could it possibly mean? Are Americans displacing their guilt at completely fucking over Iraq by sympathizing with Palestinians? Is the fear of terrorism a factor, or, given recent history, are more people simply becoming conscious of the problems in the region, and trying to extend sympathy to the underdogs? The film is admirable in ways, and worthy of consideration, though as I said when I first saw it, I think it is not an entirely honest treatment of the subject.

Speaking of not being entirely honest Roger Ebert wrote a review of it here, and offered a wish for the film that seemed to me, on consideration, truly bizarre, saying, "What I am waiting for is a movie about a suicide bomber who is an atheist, who expects oblivion after his death and pulls the trigger after having reasoned that the deaths of his victims will advance a cause so important that he, and they, must die. When religion enters into the picture, it clouds the meaning of the act: How selfless is your sacrifice if you believe you will be instantly rewarded for eternity?" I emailed his Answer Man column to point out how strange this is; how can religion possibly be factored out from a treatment of suicide bombing, when it is, in fact, so central? He is, in effect, wishing the movie were less honest than it already is. He didn't print my letter, alas.

Afterword: anyone interested in Paradise Now would probably be fascinated by this interview with Ali Suliman, who plays Khaled in the film.
Posted by Allan MacInnis at 12:04 AM

Keep in mind that the nominees in the foreign-language category are picked by a small committee (not selected by a ballot of all Academy members, like the Best Picture nominees).

Why did they choose Paradise Now? I think because the film is an accessible, provocative look at a subject on everyone’s minds, from a different perspective. Since the 9/11 attacks, Americans think of suicide bombers as a domestic threat, not something foreign.

Personally I am baffled that the committee did not select as a nominee the Finnish submission, Mother of Mine, which was truly excellent, maybe the best film I have seen of the last two years.

Also the Danish submission, Adam’s Apples, and the Hungarian submission, Fateless, were both very moving and probably deserved to be nominated for best foreign-language film.

Finally, I thought Caché was one of the best films of the year; it should have been nominated for Best Picture and several other awards, as well as best foreign-language film, but it was disqualified in the latter category because it had been submitted by Austria but its dialogue was in French rather than German (see discussion at my blog).

I don’t think see what the big deal is about whether the film is described as being from ‘Palestine’ or ‘the Palestinian Authority’. Keep in mind that submissions were accepted from Puerto Rico and Hong Kong, neither of which is a sovereign nation (see listings at thefilmexperience.net).

Your theory as to why the committee chose PARADISE NOW are eminently reasonable, and I agree with you about CACHE -- far, far superior to TIME OF THE WOLF, which was quite a disappointment to me after THE PIANO TEACHER. I think that the problem with the phrase "Palestinian Authority" lies in that it is a governmental organization, not an area; it would make more sense, in keeping with your comments about Hong Kong and Puerto Rico, as labelling the film as coming from the West Bank.

Didja go to any Murch events?

Was in line for rush tickets at VCT last night for The Conversation, but did not get in.

It was pretty rewarding. I'm trying to get a piece on it published in Senses of Cinema -- but I quote Murch a LOT, so I don't know if it will fly (how does copyright affect heard speeches?). If they don't take it, I'll stick it here.