Dinosaurs, Doggies, and the Persistence of Advertising 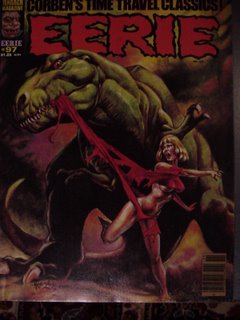 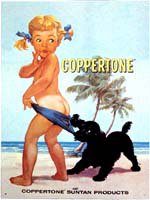 After stumbling upon a screening in Stanley Park of the 1933 version of King Kong last summer, as part of the Monsters in the Meadow series, I got to thinking about the horror comics of my youth -- I read Warren publications pretty much ceaselessly. I actually picked up a couple recently, for old time's sake -- mostly stuff focusing on Richard Corben's art, since I'm a fan, including a copy of Eerie #97, which collects Corben and Bruce Jones' time travel stories (I was really fond of dinosaurs when I was a kid). Actually, the original Corben cover, when the first story ran, in Eerie #77, was better. Bear in mind that I was about 11 years old at the peak of my enthusiasm for this stuff -- the naked women were interesting, but not yet a point of obsession: 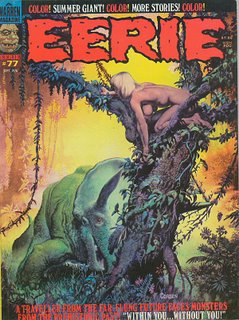 Anyhow, I just today realized that the cover for #97, by Val Mayerik, is a play on the famous old Coppertone ads of yore (which actually predate me -- interesting that an ad should be so famous that, even though I never saw it at any point in my life, I should have awareness of it now).

While I'm sharing favourites with you, I also always loved this piece by Berni Wrightson, from Creepy #113: 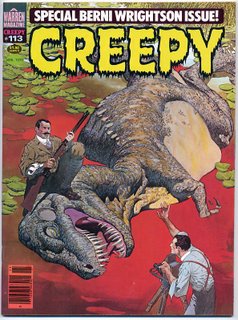 There's a couple of galleries of old Warren covers online here and here. They make delightful desktop themes... I'm surprised the stories in them don't get plundered more often for Hollywood movies; I always thought "Night of the Jackass" would make a very interesting film, in particular, though I haven't read it since I was a teenager...

Posted by Allan MacInnis at 1:51 AM