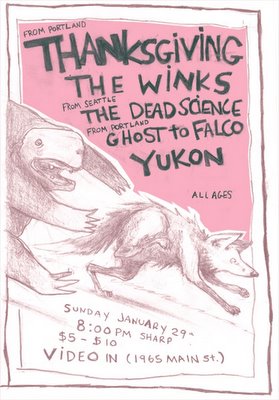 One month to the day of the last Winks gig I tried to stir up excitement for, here comes another Winks gig, this time at Video In. The performers on the bill are described thus on the Winks mailing list, the latest missive from which I have quoted below. I am unsure if "rapped" is a pun on rapping (I doubt it) or a misspelling of "wrapped" so I have left it intact (y'all know my dayjob is as an English teacher, right?):

Thanksgiving is a wonderful folk singer from
Portland. As for street cred, he's on Phil Elvrum (Mictrophones/Mount Errie)'s
label and Vice gave his new CD a "9".

Yukon sing sweetly, strum
classical guitars, hum along to harmoniums and tap on resonate woods. They also
just finished recording their new CD with Todd of the winks.

Ghost to
Falco are also from Portland and they will be rapped in a cozy blanket.

The poster is attached. Marek drew it.

In Other Winks News:

Todd is opening a little recording studio
called Castle in The Clouds. Grand opening special price is $10 per hour.

That's all for now,

Godspeed Winks, but I have plans for Sunday...
Posted by Allan MacInnis at 8:42 PM