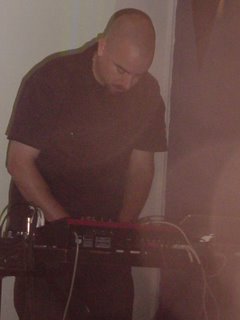 Stuff to check out in Vancouver: Video In will be hosting Cue Up, a monthly showing of video work by local artists, on Thursday, and 1067 will be hosting a noise event, featuring G42, Flat Grey (do they have a website?), Sistrenatus (pictured above, during a collaboration with G42's Dan at the Zombiewalk afterparty), and more, on Saturday. Should be intense.

Avid readers are advised to see the next issue of The Nerve Magazine for feature/interview thingies by me on Jarboe (playing February 4th at Richards on Richards, we think, on the same bill as Blixa Bargeld) and Gremlins director Joe Dante (in regard to his recent Homecoming, which has attracted some attention). The Nerve, of course, ran my Terry Riley feature last month...

It's been a pretty intense few weeks and writing the above-mentioned articles has kept me busy, so sorry that the blog has been a bit slack lately... I'll try to put up a review of the Terry Riley/Michael McClure concert later in the week.
Posted by Allan MacInnis at 5:08 AM