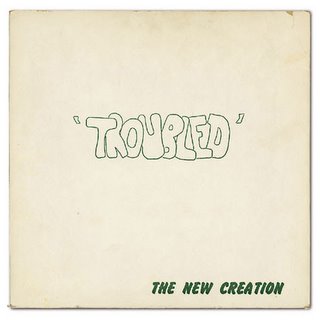 The story of the New Creation is fascinating and worth reading, and you can do that at greater length here. Briefly, they were a Vancouver-based Christian garage rock band who had a very short career and pressed one album, back in 1970, called Troubled. It was paid for out of their own pockets in a run of 100 copies, and sank into permanent obscurity faster than you could say "the Shaggs." It's a brilliant album, with a moody, dark, and somewhat apocalyptic take on Christianity and some really neat lyrical turns and riffs; outsider-music writer Irwin Chusid notes in the liner notes for the disc that if you don't like it, "you're a barnacle beneath the yacht of aesthetic perception" (tho' personally I'm prepared to forgive those friends of mine who don't immediately groove to its brilliance). My draw to the story, tho', has to do with HOW the disc was rescued: Ty Scammel, Ty of the Vancouver Flea Market, Ty the elfin old hippie with an extensive knowledge of obscure psychedelic rock and a great enthusiasm for sharing cool music with his customers -- Ty who turned me on to Fred Frith and a lot of great free jazz, as I mentioned in my appreciation of the Nihilist Spasm Band a few months ago -- found a copy of the album in a thrift store, recognized its potential, and played bits of it for various friends and customers, one of whom, an obsessive quester after new discoveries in the realm of outsider music, got really enthusiastic and continued the project of delivering the New Creation from the murk of time. Being a book and sometimes record scout myself, I delight in the role they played in salvaging this album, and that's why I went ahead and bought it -- since Ty apparently died a couple of years ago, this album is, to me, his legacy. It was googling his name that brought it to my attention in the first place. Anyhow, the album is available now through the Companion Records label -- who have MP3s of the band online here . You should buy it before it sinks into obscurity yet again!!! Who knows how long the window will be open...

Note: the pic above shows the original album cover, as Ty found it in some Salvation Army or such, and not the current CD cover...!
Posted by Allan MacInnis at 2:39 PM