Daddy Issues, the Blow Up Dolls, and Clone 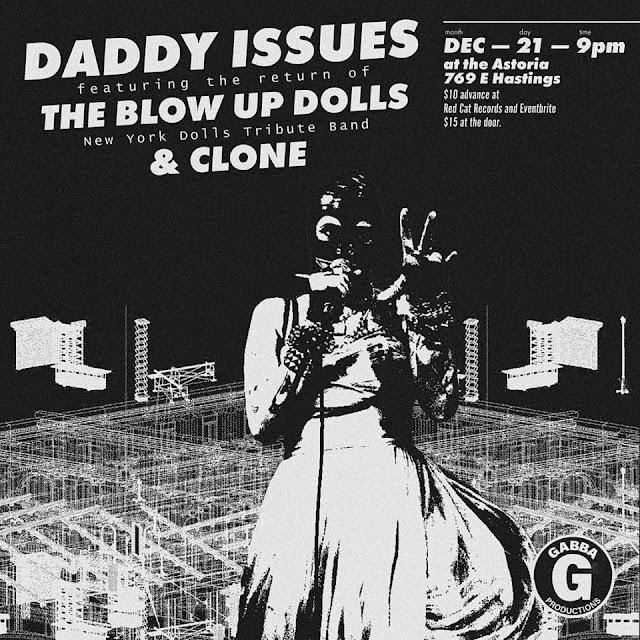 So despite her outrageous milkshake gouge the other week, I keep planning to write about Betty Bathory - and in fact I already have something in the can - but there's a catch. The interview we've done was based around her BB Allin tribute act - which I already wrote about, but not for the Straight, so there's room for one more plug; plus what I wrote was done prior to my having actually seen her show, at Funkys just before it stopped mattering as a hub for the live music scene. There I was peed upon, smeared with poo, and had a bottle broken over my head: none of which was real (I don't think), but all of which was pretty damn memorable.

Problem: her second-to-last attempt to put on a BB Allin show went awry when the SBC Cabaret was shut down as a live music venue; then her previous attempt, earlier this month, was shut down when the venue learned that it might get a bit, uh, messy. Okay, fine: I've been meaning to check out Betty's other, non-cover band, Daddy Issues - which features, in the current lineup, Murray Acton of the Dayglo Abortions, as well as Mr. Bathory himself, Matt Fiorito, Rich Kytinski, and former Subhumans 2.0 drummer Randy Bowman - for a long time. Another problem, though: I am not a fan of preparing for interviews via listening to Youtube clips. I want an album, or at least some files for my phone, so I can just walk around playing the thing and don't have to sit in front of the computer (which I get plenty of practice at) and don't have to start each song fresh. It also really really helps if I have seen a band live, before interviewing them, and I have only ever seen Betty's tribute acts, so...

...anyhow, Daddy Issues plays this Saturday at the Astoria, along with a band I've been urged to see, the glam revivalists Clone. But best of all, smack in the middle, is another chance to see Ron Reyes in action, singing for the Blow Up Dolls, a New York Dolls tribute band. To my knowledge, I have only seen Darryl Stapleton in action with a Gun Club tribute band, but I loved that set. I ran into Ron the other day and had a chat with him about the upcoming event, which was where I learned he was the singer. Apparently there's no news on the Piggy front, and from what he said, this might be the last chance to see him in action for awhile!  My last interview with Ron is here, about a superb Piggy reformation, of which I put vids online here and here. I really enjoyed that night...

That's it, though - there has been no time to interview anyone about this, since it came on my radar, but I'm excited for the show. Plus it will give my wife a chance to wrap my Christmas presents - I've promised to go out, and go out I shall.

See here for more information on the gig!
Posted by Allan MacInnis at 10:43 AM

I put clips of all three of the bands on my Youtube channel, if anyone is interested... fun show! The Blow Up Dolls pushed the limits of how chaotic a band can be and still rock, and Daddy Issues were far more bluesy than I expected, and it was fun seeing so many people I know at one gig, but I gotta say, the high point of the night was Rachel Strobl from Coach StrobCam giving me a happy little wave from the stage. I had no idea that she was in CLONE, nor had I ever before seen her bust pushed SO high up it seemed to be threatening to explode... Some enormous heels were worn, too... It was quite a different Rachel from the one I thought I knew!

Anyhoo, the vids are here, but if you're reading this after Dec 2019 you might have to scroll back a ways... https://www.youtube.com/channel/UCPiJZgZ3gzACrJQ31l1h7kg?view_as=subscriber