The New Jack Reacher: Blue Moon by Lee Child, and the accidental Yojimbo 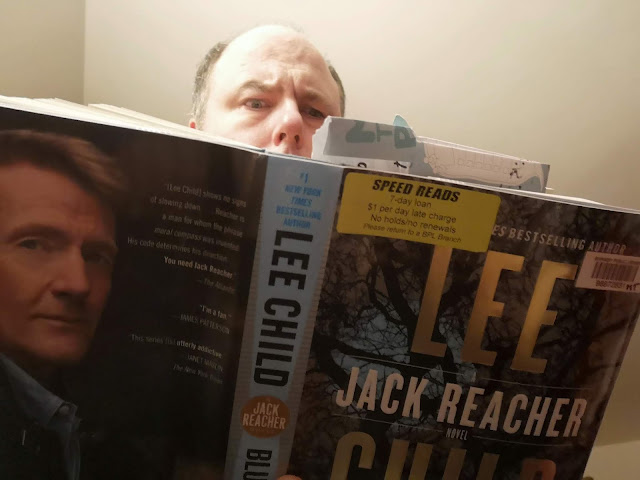 I have not yet finished the new Jack Reacher novel, Blue Moon, but I just want to say that, 140 pages in, it is doing something that delights me, and that I hope it will continue to do. I was starting to wonder if it was doing what I think it is doing around page 60, was getting excited at the thought that it really was doing it at page 80, and am convinced it is doing it now, but still waiting to see how it plays out: It's an accidental Yojimbo, a happenstance Hammett, A Fistful of Dollars held in an invisible hand. It's also the only time that I am aware of Reacher's creator, Lee Child, consciously riffing on a classic of crime literature - in a way that might even invite Reacher to comment on the similarities between the story he is in and the cultural template it is carved from, when he figures them out (he still doesn't realize exactly the nature of the plot he is caught in, but surely at some point he will; I'm excited to see how that will play out, and how versed in crime fiction Child will make him...; there could be a moment ahead on par with Kilgore Trout being set free by Kurt Vonnegut in Breakfast of Champions ahead, where Reacher sort of discovers he is a character in a genre story, albeit one told by authors other than Lee Child....).

The story goes like this: Reacher - surely as close to a ronin as has been produced in contemporary British-American crime fiction - drifts into a town where two rival gangs are vying for control. In the Hammett novel that originally inspired the various film adaptations, borrowings, and thefts, also including Walter Hill's Last Man Standing, he is the Continental Op, and the town is nicknamed Poisonville (also by the way a song on the new Modernettes album, or at least among the demos). In all previous variants, with a coolly calculating, bemused cynicism, the protangonist - be he played by Toshiro Mifune, Clint Eastwood, or Bruce Willis - deliberately sets the two gangs at war, by pretending to work for awhile for one, then shifting to the other. While retaining a certain moral ambiguity, he destroys the balance of terror the gangs have held the town in, liberates the decent townfolk, eventually participates in dispatching the gangsters himself - tho' mostly he is content to watch them kill each other - and then wanders off to his next adventure, his work done.

That's also what seems to be happening in Blue Moon, with Albanians and Ukrainians as the rival gangs in a small American city, except in this case, Reacher doesn't realize he's doing it. He doesn't mean to set either gang at odds with the other; he doesn't even know it's happened yet. But by mechanisms that I will not lay out here, as a result of his helping an older couple in trouble, he does exactly what the Continental Op, Yojimbo, the Man with No Name, and whatever the hell Bruce Willis was called in the Walter Hill film (which I've never seen) do, clearing the way for an all out war that will liberate the town and the people he has chosen to protect.

Of course, I am not yet at the half way point in the book, and it may yet take a few twists and turns. Surely Child - or James Dover Grant, if you want his real, Donald-E-Westlake-style name - is conscious that readers like me, aware of the Hammett and Kurosawa and Leone and Hill precedents, will be reading the book in light of this veritable 20th century archetype. Whether Child/ Grant is going to reward us for our awareness or turn the tables on us, I cannot say, but for someone attuned to patterns in genre, it's proving to be a fun ride. Can a good person set two evil armies at war and not even realize he is doing it, simply by virtue of doing good? When Reacher realizes that's what he's done, will he actually consult the plots of aforementioned stories for the next move?

I mean, he could. At the very least, he's surely seen A Fistful of Dollars. (Harder to imagine him watching Kurosawa).

It's a fun thing to contemplate. Not quite as fun as The Hard Way, which also plays with questions of misperception, and has interesting thematic/ meta-level implications (Reacher consistently misunderstands what he sees and makes a helluva mistake, which he then must rectify; he means well, but does everything, up to a point, totally wrong). The Hard Way remains my favourite Reacher, and time will tell if Blue Moon will even be a memorable one, but it seems to be at least as good, say, as Make Me or The Midnight Line, two of the better of the recent crop of Reachers. Anyhow, I'm enjoying the heck out of it.

It scares me a little that I have read 23 complete Jack Reacher novels, and am now into my 24th. It's too many, but they're so easy to digest, so entertaining, and give me so much (slightly stoopid, I admit) pleasure that I just can't help it. Guilty pleasure, a bit, but whatever gets me thru the night...

Addendum: Just finished the book, and jeez, I'm disappointed, while at the same time having to acknowledge that it was a fun read. The similarities in structure with Hammett, Kurosawa, Leone and Hill only go about as far as I had read when I wrote the above, and no further; within about ten pages of page 140, one of the two gangs figures out that in fact it is not the other gang he is at war with, but a third party. And then it's just a Reacher novel, albeit one with more than its share of luck and coincidence and everything working out okay in the end, rather improbably so, so much so that you feel kind of embarrassed at the elements of reassurance that such a story provides: Oh, really, the good guys win, against all odds, and make it look easy? Who would have thought (besides anyone who has read a Reacher novel before). It's still a fun, fast read, but what I had hoped for, above - Reacher actually coming aware that he's in an archetypally-loaded narrative - never materializes. Any authorial debts go unpaid (tho' with Kurosawa stealing from Hammett and Leone stealing from both, not acknowledging sources is actually kind of traditional in this case). So in fact, it's a lesser Reacher. I would recommend, instead, The Hard Way, or Make Me, or, if you want something with some contemporary relevance and a more thought-provoking theme/ subtext, check out The Midnight Line.  Then again, if you go through Reacher books like bags of potato chips, this one does the trick as well as most - it just doesn't stand very far above its peers, an average Reacher, no more or less.
Posted by Allan MacInnis at 12:17 AM