Commemorating Funkys Final Weekend by Posting About Last Weekend, when I actually went there 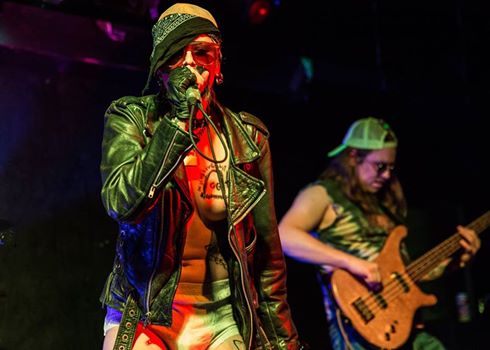 Betty Bathory as BB Allin, by Bob Hanham, not to be reused without permission 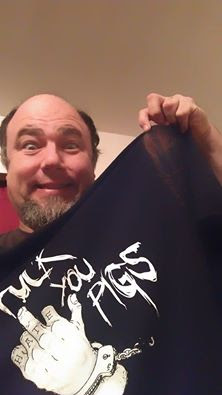 I shouldn't have worn my Fuck You Pigs shirt to Funkys last Friday. I wore it because I gathered the goo was going to fly, and wanted a shirt I didn't really have an investment in. When I bought said shirt (also at Funkys some distant night ago, on a night when the band, from Victoria, played there), it was as an example of over-the-top, good-way-to-get-yourself-beaten-by-a-cop agitprop, a shirt so offensive that it simply had to be seen to be believed. The front of the shirt shows a photograph of two uniformed police engulfed in flames, with a caption that says something to the effect of "sure, cops are people too... but so were Nazis." The back cover has a raised middle finger and the band name, in big, hand-scrawled letters. In no way do I endorse this message; though no doubt there are paramilitary, punk-beating asshole police officers out there, I've met plenty of helpful, responsible cops in my day, had a father who worked as a jail guard, and - maybe most importantly - have no investment in waving red flags in the eyes of bulls. That side of punk culture - the ACAB, throw-a-bottle-at-a-cop-car side - has always seemed a smidgen pathological, truth be known: kids acting out because they secretly WANT to be put back in place by an authority figure. Still, I figured - this is what I'm like when I've been drinking near a merch table, and have a little extra money in my pocket - that I needed to buy one so I could show it to people: can you believe this shirt? Can you believe this band name? Move over Crucifucks! Step to one side, MDC! It's the Fuck You Pigs!

Anyhoo, since I bought it, I've actually contemplated getting rid of it a few times, since it's generally just hung around in my closet. It's not the sort of thing you want to be wearing when you're meeting your girlfriend's parents or teaching an ESL class, you know? If I weren't half-convinced that the little old ladies at any thrift store I donated it to would go "eww" and throw it away, I prolly would have just donated it somewhere. I think I can say with accuracy that the GG Allin tribute show I was attending (see below) was the only social event I have been to since I bought the shirt where it actually counted as appropriate attire, and I figured, having brought a change of clothes, that if it got TOO messy, I would just throw the thing away, or leave it draped on a chair by the bar. Maybe the guy who stole my Bison shirt would appreciate it?

Sadly, now that Betty Bathory smeared her "poo" on the shirt during her tour of the pit, my sentimental attachment to the shirt has increased. Now I can't get rid of it (though I did wash the poop off the next day). It will ever be the t-shirt that BB Allin wiped her poo on, equal to other bits of rock ephemera I have (like a broken drumstick that Brad of Bison threw into the pit at the Red Gate, on his last ever night with the band; I still have that in a box somewhere, too. To think that some would call it garbage!). 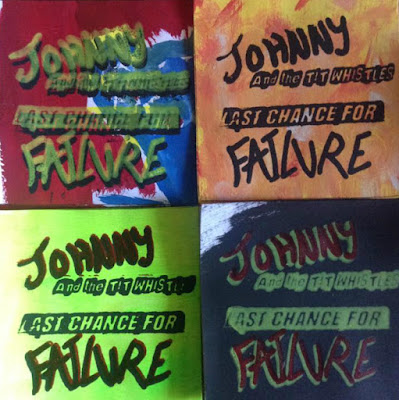 In any case: it was an interesting two nights at Funkys, last weekend. The previous evening, Thursday, Johnny and the Tit Whistles, Beneath the Throne, and Social Arsonist played. I doubt there were ten paying customers in the bar at any given point. Headcounts that I did from the stage area never rose above fifteen, and even if you figure there were five or ten people tucked around the corner from where I sat - including a few people who were obviously there to just drink - there were thirteen people in the club who were actually in the bands playing. You gather from Wendy that that is pretty normal, lately, and not just at Funky's - which fits with my own experience of seeing the Furies, the Prettys and Pill Squad down the street at the SBC to a crowd almost as thin. Bands that have been around a long time, and can safely get taken for granted, might only draw a crowd depending on what else is happening that night; and people often don't want to come out to see lesser-known, younger bands stick their toe into the water for the first time, when they can see something tried and true. It raises the question of how these lesser known bands - Beneath the Throne, for instance, who have only ever played Chilliwack before - will ever get to become "known," if there aren't people like Wendy around who make it a mandate to support bands in their formative years. Members of Bison and War Baby have both, when I asked about Wendy, said how appreciative they were that Wendy let them play, early on. You can't ever have polished, accomplished bands if you don't give the junior ones a place to play, and I suspect there are lots of bands in Vancouver who owe thanks to wendythirteen. One of the sweeter moments of the night was to see Beneath the Throne - who obviously have aspirations to be something big someday, with stage patter that suggested a much larger and more enthusiastic crowd than was really there, and a kind of arena-friendly style of mainstreamish metal - chatting in excited whispers, after the show, about how they were going to eventually make it to the Rickshaw (the big time!).

They were good, mind you. All three bands had stuff going for them. Suspected pickle bandits (?) Johnny and the Tit Whistles were entertainingly self-deprecating and had a bouncy, playful style of punk, with  maybe a pinch of folk metal in some of their riffage. The singer's shtick seems to be to be a real twat to his other band members - especially the bassist - but I presume that was ironic from the gitgo; they were, after all, the guys who broke out their bics to wave them, lit, in tribute to the more, uh, "gassy" passages of songs by Beneath the Throne (who, if they noticed they were being made fun of, played past it admirably). Still, Beneath the Throne had a pretty great lead guitarist - looked to be a bit older than the other band members, with a shorn head and a Slayer shirt, so I'm guessing he's been around for awhile, and their songs were all solid, even tho' I suspect they listen to a lot more Megadeth and Anthrax and Metallica than I do. Which is fine; they would do great at the Rickshaw, I'm not puttin'em down.

As for Chilean-Canadian thrashers Social Arsonist - well, I left early, only seeing a couple of their songs, having burned out, but I like the stuff on their Soundcloud and nabbed a CD for consumption at my leisure, and I've already written about them before. Suffice to say, the problem with the scene here isn't that these junior bands are no good: it's that there's tons of them, and a lot of them ARE good, or have the potential to be. It's actually a really fertile time for music in Vancouver, and there's more seeds than shit in the soil. But what exactly is going to grow out of all that is...

...I'm going to just abandon that metaphor. The final weekend at Funky's is THIS weekend. I don't feel well, and have other stuff going on, so I won't be going out. Plus as final moments at Funkys go, nothing is going to possibly top Bloody Betty Bathory saying "hey Allan" from the stage, as she was walking off, and breaking some sort of bottle on my head (made of sugar glass, presumably, but I wasn't going to taste the shards she left in my hair to find out). It's a great last moment at Funkys - followed by Bob giving me a lift to Waterfront Station, "shitfaced" in the most literal sense of the term, since she had smeared his cheek and he hadn't wiped it off. Her performance was equal parts top-notch GG Allin cover band and brilliant theatre, which also saw me got pissed on by her (with a colourless, odorless mystery substance from a tank that she hauled around behind her, that spurted from between her legs like real male pee). There was also deep red blood (she self-mutilated onstage, also presumably fake), a needle, and some mouth froth, as she OD'd, quivering, to "Die When You Die," killing herself onstage just like GG Allin always threatened to do (but then being able to get up and walk away: there really is something to be said for fake GG, as opposed to the dreaded Real Thing).

I didn't get any photos of the Thursday night. Here are some photos of me drinking at Funkys on Friday, however - I just figured "fuckit, I'll buy a pitcher for myself." And I got a few pics of Betty's Fuck Guns, a solid Sex Pistols cover band who opened; the MC during one of the interludes; and Balony Sandwich, a very entertaining Green Day cover band who did the mid-show set (note the cool people in Residents costumes in the pit! Alas, I never heard back from the fella in the wicked Captain Spaulding costume, who was gonna send me pics of us together). Then my battery died, which is just as well. It was nice to be in the pit enjoying myself without a camera between me and what was going on. (People who want to see other pics of the night are directed to the great Bob Hanham, who got some great ones; all photos below are by me).

More to come on wendythirteen, but meantime, if you haven't been to Funkys lately, the next couple days are your last chance. 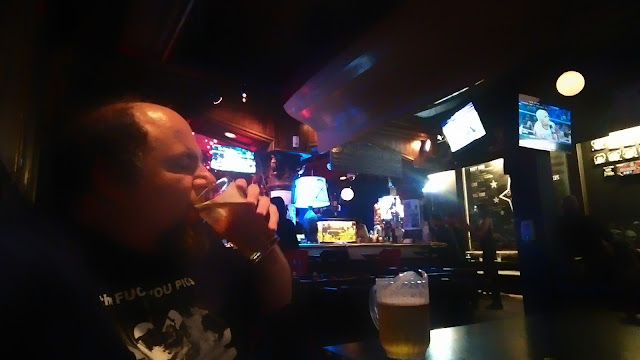 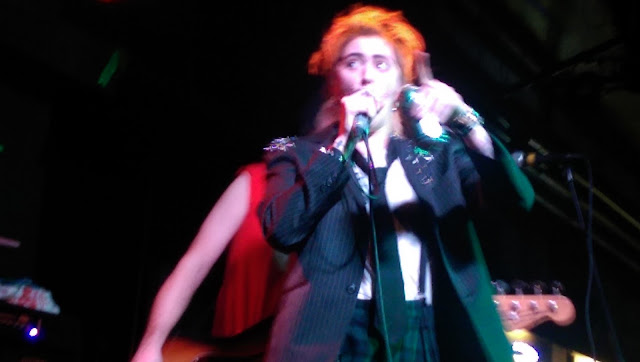 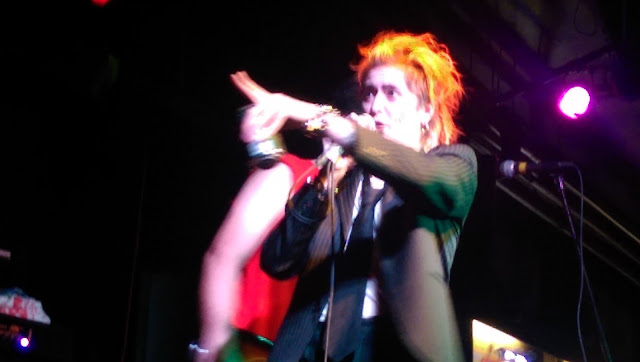 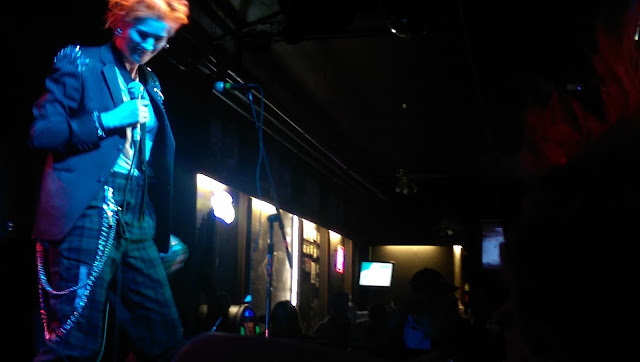 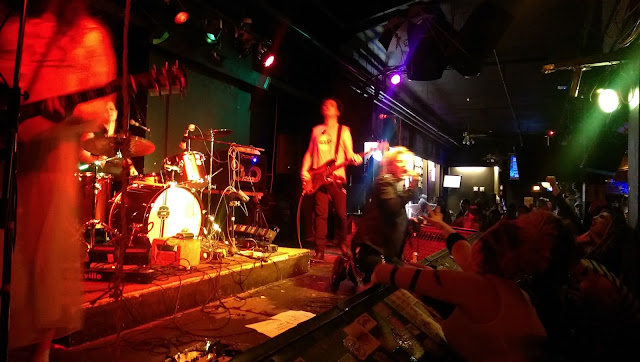 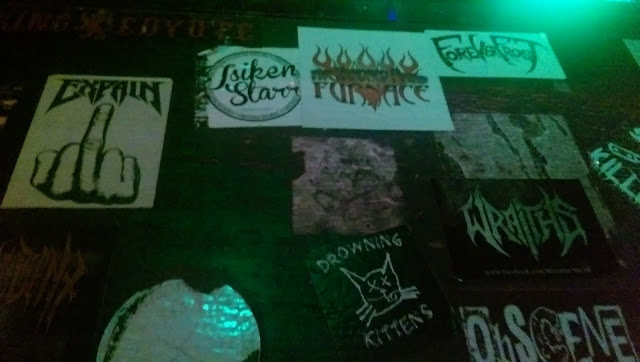 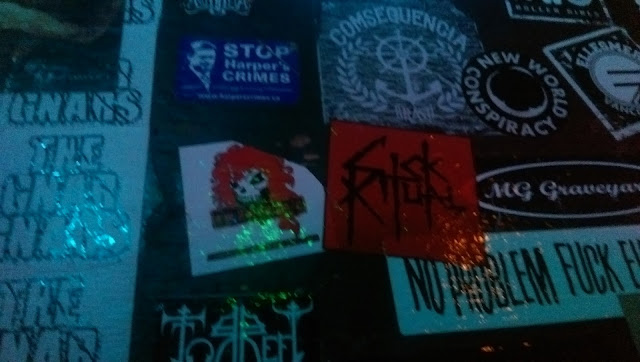 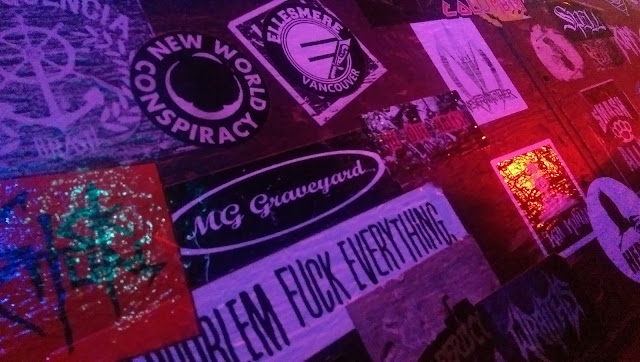 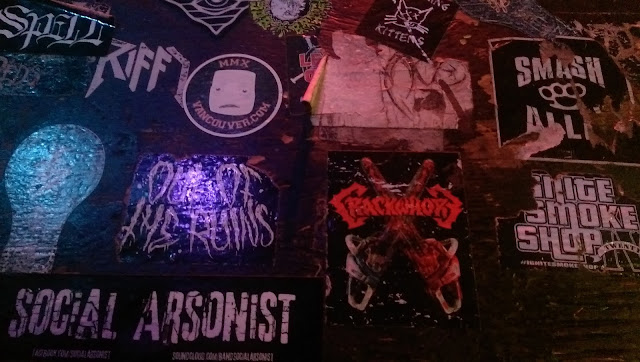 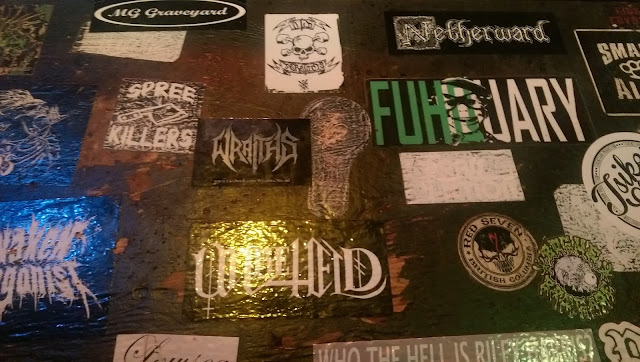 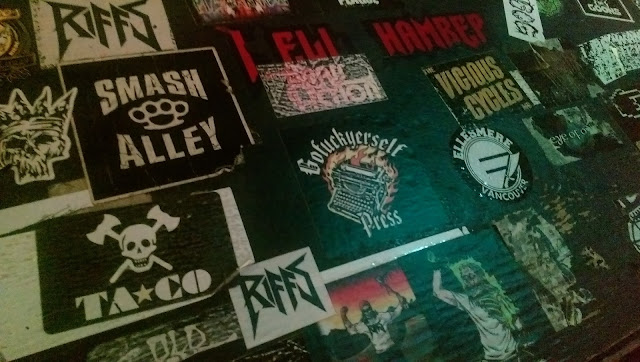 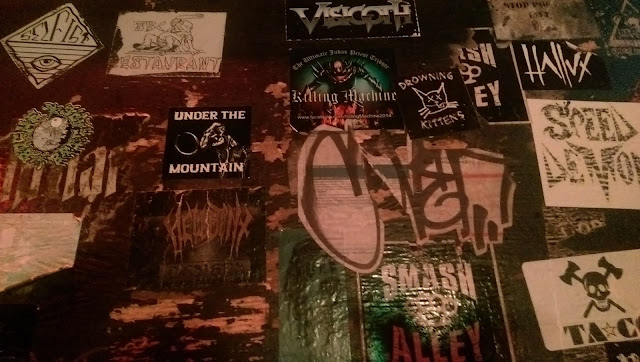 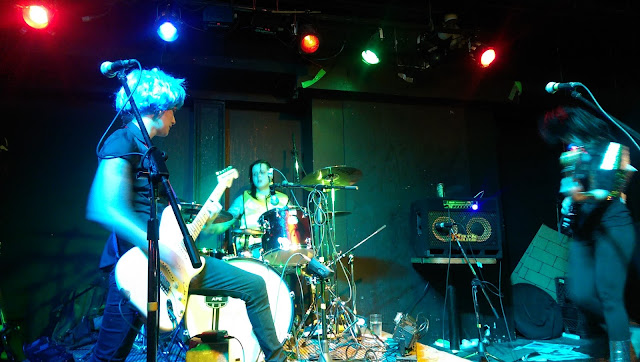 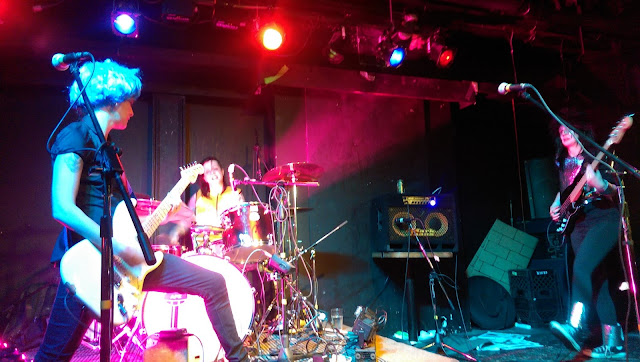 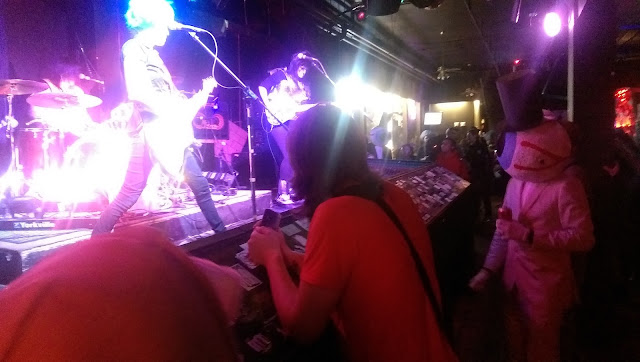 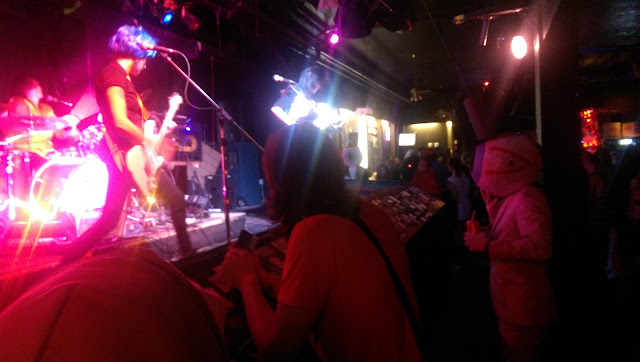 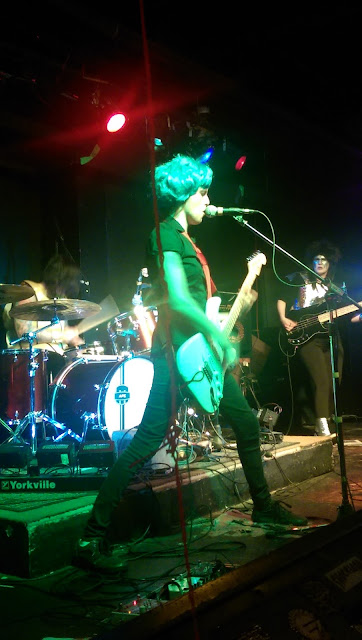 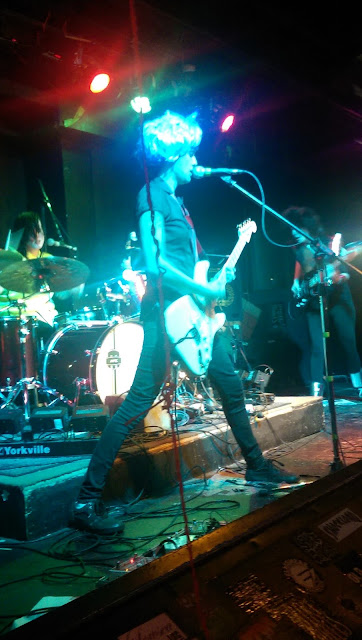 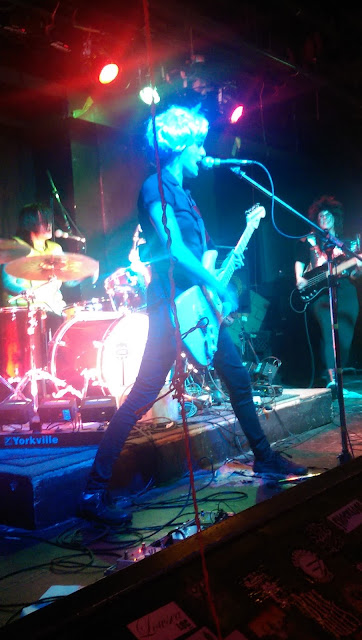 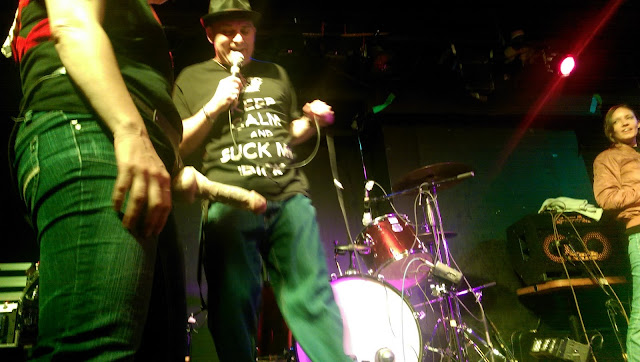 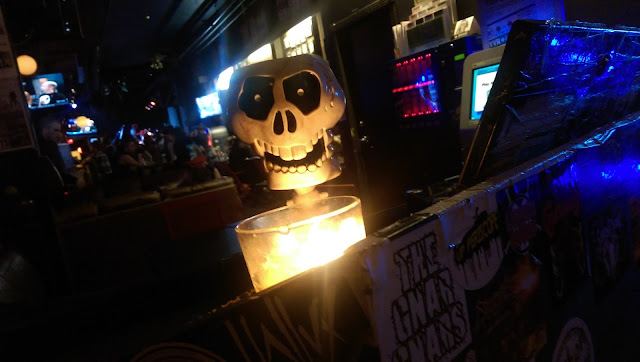 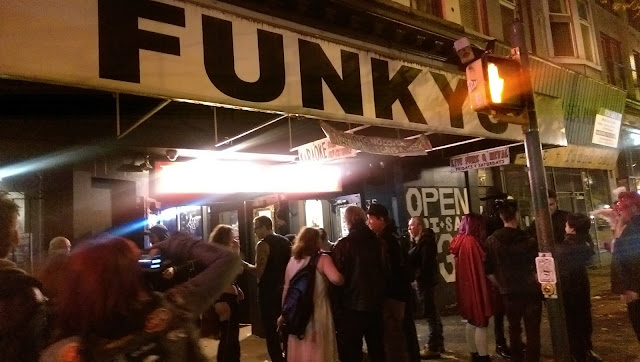