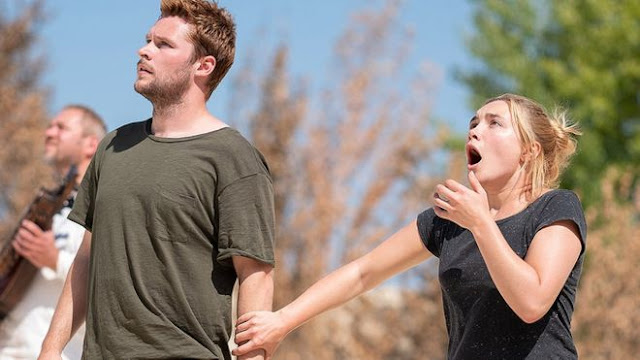 Midsommar is one of an increasingly large number of movies that attempt to take stock of Paganism and neo-Paganism, showing that the idealised, sanitized contemporary version of the lives of Pagans, such as that represented by a lot of the airier "New Age bookstore" versions of Wicca, covers up (or leaves out) some fairly dark and disturbing practices. Telling a story of young Americans visiting a European "commune" that practices the old ways, it joins The Wicker Man, Apostle, Left Bank, and a fair number of movies and TV series about Vikings as a compelling, gritty take on ancient European customs (one of which is the ingestion of magic mushrooms, so it's also fairly trippy at times); but even though it is a horror movie with connection to these films and some identifiable genre elements, it doesn't necessarily end as you might expect. In fact, it may have something else going on under the surface that is suspect and misogynist- there is a little bit of a "devouring vagina" theme that lurks, especially if you count, say, the shape carved into a particular animal carcass of import to the film's climax.  I liked Misommar better than Hereditary, which also has compelling and interesting elements, but belongs to a horror genre that I have little interest in, involving the desire of the Devil for progeny; I wasn't sure that Hereditary amounted to anything on first viewing, gripping as it was, and I haven't looked at it since.  Both films are directed by Ari Aster, who is emerging as a real name to watch... 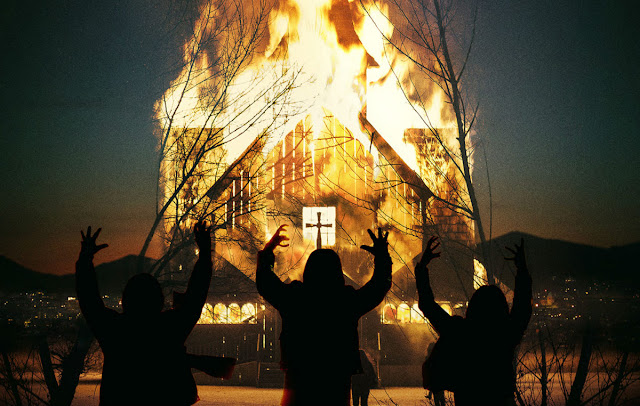 Lords of Chaos is also very interesting. I've read the expanded/ revised version of the book from which it takes the title, which also tells the tale of murderous, church-burning, and evil goings on as part of the early Norwegian Black Metal scene. I enjoyed the film. I gather that Varg Vikernes has disputed its content, and complained that the actor cast to play him is Jewish. I can't speak to "what actually happened," but this is a well-made, provocative film, which makes fairly unlikable people understandable and interesting (none moreso than Euronymous, who gets to narrate, despite what happens to him). Like Midsommar - maybe even moreso - it has some upsetting violence in it (to be specific, the most vicious stabbing murders I've seen onscreen since I watched van Bebber's Manson movie). People worried that the film trivializes and/or sensationalizes its subject matter need not be. Even Erika, my wife, found it interesting, and she doesn't care at all about black metal (she did have to cover her eyes during some of the murders, though).

All I have time to write, but see these movies!
Posted by Allan MacInnis at 9:02 AM