Bullfrog on my shoulder: a dream 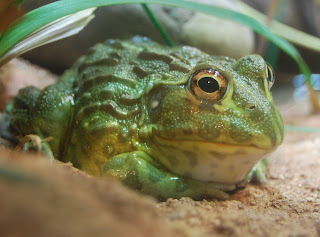 In the dream, I am living, again, in downtown Vancouver, albeit in an area I have never actually lived in, down by where Richards on Richards was, somewhere on the northern margins of Yaletown, hear Davie. It is raining, in the dream, and I am taking a walk down Richards Street - there is an earlier part of the dream involving the effects of the ongoing storm, but I have forgotten it - and suddenly am surprised to see an enormous bullfrog leap from the street onto the sidewalk (by "enormous," I should say, it is still in the realm of actual bullfrog-size, not some Harryhausen-sized monster frog). I chase it for half a block, hoping to catch it, but not for my own selfish pleasures: I am worried that it will get smushed by a car (as frequently happened in Japan, when I lived there: bullfrogs - a ubiquitously invasive species - would come out onto the sidewalks during the intense, semi-tropical bouts of rain, and I would see the evidence in the saddest of ways, finding flattened bullfrog carcasses on the road on my ride to work. Saw a turtle that way, once, too, and would periodically get off my three wheeled granny bike to investigate its corpse in stages of decay). The bullfrog can jump too fast, too far, however, and it soon is clear that I will never catch it this way. None of the other pedestrians appear interested, but at some point, the bullfrog gets turned around, reacting to people walking towards it, and starts coming back my way, which I observe; I get to one knee and make friendly gestures and sounds at the bullfrog, in the hopes that it will come to me, realizing that I mean it no harm.

(...I realize as I type this that this part of the dream may have been informed by watching a small Asian girl playing with her two pet chinchillas in the schoolyard outside our window the other day. They also would never have been caught if they hadn't wanted to be).

The bullfrog actually does come up to me, to my surprise, and soon I have the bullfrog on my shoulder, walking down Richards and turning right on Davie. I take some selfies of myself, thus, as I walk down the street, like some pirate who couldn't afford a parrot; I may even shoot a little video. I'm going to meet my wife on Davie Street, and I figure that I can try to find some water where I can safely deposit my froggy friend (because in the dream, False Creek has morphed into the Fraser River and has fresh water, which is where I presume the frog has come from). I explain my intentions, and am surprised to see that the bullfrog actually seems to understand me; we may actually be communicating a bit! I get to the area I'm going to, and set the bullfrog down in a quiet area, near a brick wall, telling it I will return and that it should wait for me - I need to interact with people a bit, and it will be easier for me to do this without a bullfrog on my shoulder.

I see a pub I want to go into, maybe to scope out the back "yard," in case there is river access. There isn't, but there is a small, fenced-in lawn (because apparently businesses on Davie Street have lawns and yards in back!), and I see that there is a pond in the far corner of said yard. Okay! I find the owners - there are two people in a side room, shooting pool - and explain my desire to put a bullfrog in their pond. They seem amenable, so I go back out and discover that Erika has arrived.

We talk a bit - I excitedly explain about the bullfrog. There is part of the dream here that relates to something forgotten, something that didn't make it into my waking life, where we see potatoes I'd abandoned previously on a grassy hillside, because they'd gotten damaged by the storm, and I ask Erika if I should try to keep some of them, but on investigation we see that they're deformed and weird potatoes, the skins broken, potato-flesh bulging out, and she confirms that they were worth throwing out. I'm not sure what that part was about, though I do briefly wonder if the potatoes will sprout roots and there will be potatoes on Davie Street (I believe my sleeping brain here conflates Davie Street with a part of rural Maple Ridge, the dikes off Laity Street, where I did once, as a teen, catch a bullfrog, about which there is a long story, involving my sock and underwear drawer... I took Erika for a walk in that area awhile back. There was also a compost pile in Maple Ridge where as an even younger child I discovered that "wild" potatoes were growing from scraps that had been thrown there, some of which I brought home to my parents. It doesn't really fit with the rest of the narrative).

Anyhow - I bring Erika to the pub to wait for me, and go out to find the bullfrog. I go to the wall where I'd left it (and here, Davie Street actually returns to resembling Davie Street a bit), and find I cannot see the bullfrog anywhere. I had left it at eye level, on a ledge, or perhaps clinging to the wall, in a way I doubt a real bullfrog could do. But eventually I look down, and there it is! I pick up the bullfrog and we "converse" a bit, me explaining that I have found a pond for it. The bullfrog may actually be able to speak back - I'm a bit foggy on this detail. I place the bullfrog on my shoulder and go back into the pub, where I announce to Erika and the pub owners that I have found the bullfrog -

- and am greeted by weird looks and laughter, and briefly catch an image of myself from without: the bullfrog is, in fact, part of ME, and when "it" speaks, it is with MY TONGUE. I am confused: is the bullfrog hiding in my throat? (I do have a bit of a cold - a "frog in my throat" - in reality, though it seems unlikely my sleeping brain would concoct so elaborate a metaphor for this). In fact, it seems that the bullfrog was me all the time, that it was a delusional manifestation of something from within. Erika is marvelling at my strangeness through this, but she is being kind about it. I scroll back through my photographs and there is, in fact, no frog; I am unsettled by the thought that I was the bullfrog all along, that the bullfrog was merely a projection of something inside me. But what? What does the bullfrog represent?

I wake up at 3:40 AM, needing to pee, contemplating the symbolism of my dream bullfrog. I attempt to go back to bed, but I am too focused on not forgetting this marvelous, strange dream, and within half an hour, I'm back out of bed and typing this.

Everyone's got something to hide except for me and my bullfrog.
Posted by Allan MacInnis at 4:43 AM

I completely neglected to realize that I woke up with bullfrogs on my mind, just like in that Holy Modal Rounders' song! https://youtu.be/V81o8ahl7dI