The Wild Bunch to screen Tuesday 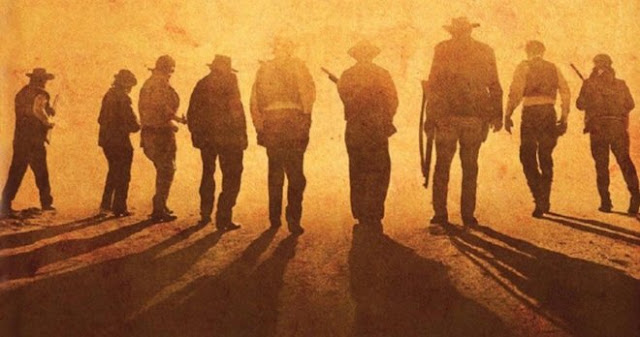 I don't always see eye to eye with people about Sam Peckinpah.

I think this is a good thing. I think tastes in film and music should be personal and subjective; I think even if we can say that a certain film is "objectively" the greatest film a filmmaker ever made - like The Wild Bunch is for Sam - that doesn't require you to love it more than other films in his canon, because (just like "what you want" and "what you get," to borrow from Pat Garrett), loving a film and recognizing its greatness are two different things.

I really, really love, for example, Peckinpah's The Getaway, with Steve McQueen - especially the first fifteen or so minutes. I'm given to calling it my favourite of Sam's films, mostly because of how he uses editing, sound and image to bring us inside the character of Doc's mind. You feel what it's like to be in prison with Doc in those opening scenes; McQueen's acting is as minimal as can be, but his emotions, his anger, his tension, his simmering struggle to stay contained, are all powerfully present. I love it. I also absolutely adore Slim Pickens in that film, and the way the story departs from the source text. Jim Thompson's novel ends on a very grim, downbeat note; as great as it is, I love that a sort of scarred romanticism emerges in the course of The Getaway, to turn it (sort of) into a testament to the ways in which love can survive horrific tribulations. Peckinpah can be pretty cynical, but he also has a romantic, sentimental streak in him, and it pleases me to see that peeking out. People have argued with me that The Getaway was a film that Peckinpah had no deep personal investment in, that it was a project for hire, but it still has some of my favourite moments in any of his films, and you know what, I do not think there is a way that that can be wrong.

Another thing in The Getaway's favour: it is not a fucking mess, the way, say, Bring Me the Head of Alfredo Garcia or Pat Garrett and Billy the Kid or Cross of Iron are (three other films of Peckinpah's that I love, note). I also love Convoy, very much considered a lesser work of his, which was supposedly mostly finished by other people because Sam was too drunk or high to really get the job done. I don't know if that's true, but if it is, whoever worked on it did a very good job, at times, of producing Peckinpah-like cinema, albeit at its most shitkicker/ vulgarian level - the kind of film that has giddy music accompanying a barroom brawl, you know? There's something "made by apes" about it which is at times embarrassing to behold. It's also very, very entertaining, however, and it's considerably better put-together than other "late Sam" movies, with none of the sprawl or self-indulgent sloppiness you see in, for example, Cross of Iron.

And that whole attempt to rehabilitate Straw Dogs was a crock of shit, sorry. I listened to Stephen Prince's Criterion commentary, and, standing skeptically at a bookstore, read portions of his book; Prince argues that Straw Dogs is an anti-violence, anti-rape text. No way in hell: it's a morally repugnant, misogynist, and deeply problematic film about how women are asking for it and how, sometimes, men are their victims. It's deeply offensive, deeply misguided, even ridiculous at times.

That doesn't stop me from watching it every ten years or so, mind you: I am not saying it shouldn't be viewed, or that there isn't also truth and value in the film, in some places. I'm just saying that you don't need to LIE about it, to contort yourself and your scholarship in absurd ways, in order to give yourself a justification for watching or appreciating it, which is the simple version of what I think Prince is doing.

Here's the thing: I do not (shoot me now) love The Wild Bunch. It IS probably the greatest of Peckinpah's films - which possibly interferes with my engaging with it; sometimes, a film has so much baggage that comes with it that you can't form your own opinion of it, for grappling with how you're told you're supposed to feel or think about it. But to me, it's every bit as problematic as Straw Dogs is in its attitudes towards women, in its macho romanticization of male self-sacrifice, it's glorifications of violence against the male body. I mean, I'm a male, and I work pretty hard, sometimes, to be a decent one. But I don't really relish the idea of taking bullets for anyone, or find poetry or beauty in it; it's an aspect of the patriarchy that I wouldn't mind seeing queried more. The Wild Bunch seems, to me, to be all about the glory of taking bullets - an uncritical celebration of the beauty of violence against the male body, and the nobility and glory of submitting to that violence. It may be Peckinpah's most "Viking" movie, in a way - about riding doomed into battle, knowing that Valhalla awaits.

I wouldn't have made a very good Viking, I don't think. I appreciate the film as standing out against the zeitgeist, back in 1969, and I love William Holden, Warren Oates, Robert Ryan and Ernest Borgnine in it, but I have never fully been able to find myself in the film, or take deep pleasure in it, as I am with some of the other films mentioned above (nevermind The Getaway: I would even watch Convoy over The Wild Bunch, given my druthers).

Maybe I misunderstand it, though. It's been a long time since I've seen it (almost ten years?), and I fully admit that every time I have tried to watch it, I come out the other end feeling like I've missed something. Maybe I have! But I am thinking I will attempt to re-engage with it on Tuesday, when it screens to celebrate its 50th anniversary at the Vancity Theatre. (I shudder with horror to realize that I AM OLDER THAN THIS FILM, which seems something of a bygone era now.) The listing for it says that "the violence wasn’t the point. The pointlessness was the point" - that the film is more about futility than the glory of dying in futility. Maybe the person who wrote that understands the film better than I do?

I am open to correction.
Posted by Allan MacInnis at 11:54 AM

You know, it was the best experience I've ever had of The Wild Bunch, last night? Never enjoyed it as much. For me, the whole film peaks at the conversation about pride and about learning from mistakes, early on - that seems the key to the whole film, the most important scene - and the film sure does take its time, after that. Tom says I'm "wrong" about my reading of the film above - but it doesn't really matter. I totally enjoyed the film, and am glad it screened!