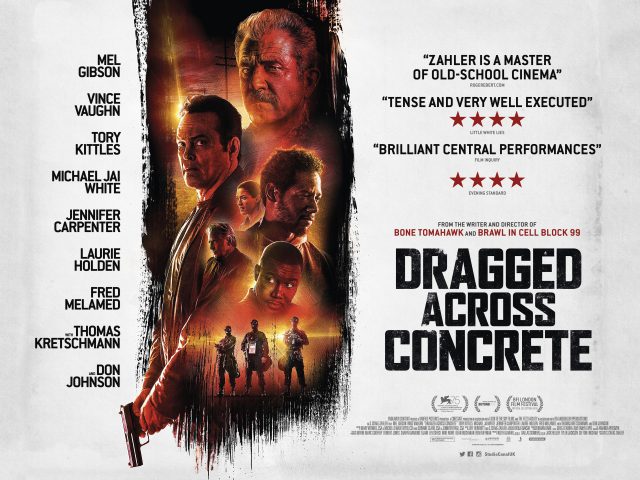 There are lots of reasons to see Dragged Across Concrete. For one, it was shot in Vancouver by S. Craig Zahler, who made Bone Tomahawk and Brawl in Cell Block 99 (and, I gather, wrote a later Puppet Master film!). It has two very talented lead actors - Vince Vaughn, reeling it back in a bit to safer "nice guy" territory after the big stretch he took for Brawl; and Mel Gibson, whose work I like, whatever else one might say about him. It also has some terrific supporting performances from people I like (sorry, Don Johnson, Udo Kier, and Michael Jai White; I'm thinking Jennifer Carpenter and Laurie Holden here). And there's some very witty lines of dialogue, some real tension (and startling moments of violence), and some interesting psychology at work. I haven't liked either of Zahler's films post-Bone Tomahawk as much as I liked that film, but I also have had the impression with both of them that he's making films that are designed to be watched and enjoyed more than once - and that one would have to watch them more than once to really be able to say anything meaningful about them.

I guess I might as well acknowledge that I'm a smidgen disappointed this time out, since I had high hopes for the film, have been waiting for it for a very long time, and found it a little slow in the middle (on first viewing). But overall it was interesting, seems a keeper, and is a film I will probably return to someday. As one critic mentions in the poster above, Zahler seems very old-school in its approach to cinema, evoking 70's crime cinema, without feeling self-consciously retro (a flavour I mistrust). I gather there's some fussing online about Zahler's politics, which are unknown to me, but sometimes seem to resonate to the right of the spectrum. Hell, I've participated in a bit of that myself. I didn't find much of Dragged to be objectionable though; there is a moment - in Don Johnson's office - where some of the banter seems to be expressing what may be Zahler's actual opinions, but he's not the first suspiciously conservative filmmaker whose work I've found things to enjoy in (I'm also a fan of Clint Eastwood and ol' Mad Mel himself).

Anyhow: it's worth watching! (Oh, and fans of 70's funk soundtracks for blaxploitation cinema - "Across 110th Street," that sort of thing - will like the soundtrack, with Zahler co-writing the songs himself, and bands like the O'Jays performing them. The O'Jays are still around? I had no idea).
Posted by Allan MacInnis at 11:41 PM