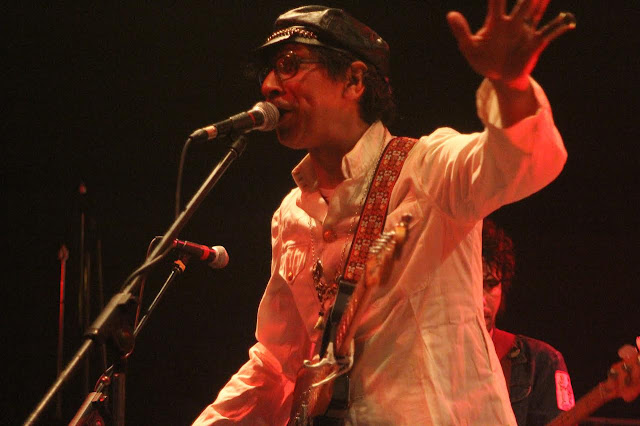 Kid Congo Powers in 2015, by bev davies, not to be reused without permission

On Wednesday, storied Gun Club/ Cramps guitarist Kid Congo Powers returns to Vancouver, this time for a show at the Commodore Ballroom, with his band the Pink Monkey Birds; they'll be opening for punk rock "supergroup"/ cover band Me First and the Gimme Gimmes - a band I have not followed, but who sound like they might be amusing indeed (their last album featured covers of "I Will Survive" and "My Heart Will Go On," apparently. I actually hadn't realized until just today that Kid Congo wasn't headlining!). I spoke to Kid Congo Powers at great length when he played the Rickshaw last year. Portions of that are viewable on the Westender website; others are on my blog. Much of it only saw print in Germany in Ox Fanzine and in two recent issues of Big Takeover magazine. There was some great stuff, which I will leave enthusiasts to find for themselves (Big Takeover should be easy enough to locate, and has vintage bev davies photos that haven't seen the light online, of Kid Congo playing at the Commodore with the Cramps, almost forty years ago. I wonder if he's been there since?).
Posted by Allan MacInnis at 1:59 PM