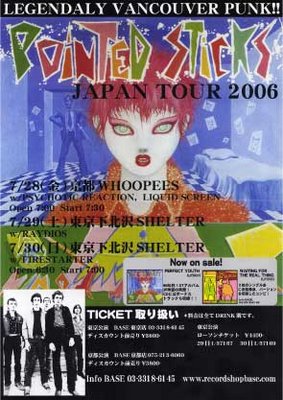 That's the Japanese tour poster (y'all know about the Pointed Sticks reunion, right?). You can also find videos of the band on Youtube -- both archival stuff from the early Vancouver punk scene and performance clips of the band in Japan! (Poke around, because there's more -- that's a pretty damned genki audience they're playing to). I'll have more stuff on the Pointed Sticks coming up online or elsewhere at a later date... Meantime, if you missed the news of the tour, check out John Mackie's article here.

...in other news, westernization has been tied to increasing mental illness, higher suicide rates, and a low birth rate in Japan. But don't blame the punks!
Posted by Allan MacInnis at 10:15 AM