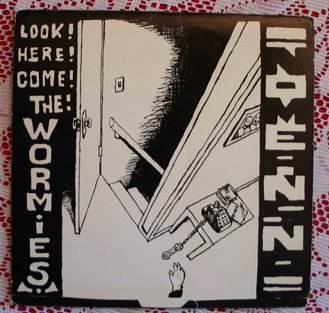 I remember schlepping this around to various record dealers in Vancouver when I had a copy, back in th' day. None of them wanted it (this would have been in the early '90's). "Sure it's rare... but it kinda sucks!" I think the late Ty Scammel of the flea market paid me $5 for it. Or maybe it was Keith at Scratch, back when they used to be downstairs on Cambie. Maybe this is the selfsame copy... Actually, I've always been fond of this song. It pops up on Soulseek every now and then. It has a definite goofy charm to it.

I wonder what Slow's "I Broke the Circle" fetches? It's actually pretty cheap on Gemm. I used to have that too; nice to see it makes some guy's "top 100" Canadian singles list, even if it's only at 40. It really is a great rock song (and it also sometimes pops up on Soulseek, and may even be available for download here, tho' I dunno, I ain't tried it). News flash... Joe Keithley said on the phone the other day (for this complex Pointed Sticks thing I'm working on) that he'd love to release Slow's stuff on CD... Grant, you reading this?

Someone show this to Grant.

Now if someone would only release (or at least rip) the Spores' Schizofungi... I did manage to find MP3s online, ripped from vinyl, of "Meat Bi-Product" and the "Narcs in my Pants" single (great damn song). Had the originals, plus I used to have the Newsweatherandspores cassette, too (with "Expo in BC" on it -- "Is this the PNE?"). And tho' I have not owned it or heard it since probably around 1990, I still remember some of the lyrics from "I'm the Boss" (which also had a video, which, as of this writing, is NOT on Youtube):

It's my economic orgasm
It pays to be alive
Cos I make profit off it
While you work nine to five...

Danny Schmanny (sp?) is my favourite punk vocalist from Vancouver, I think. Here's the cover for their first single, "Meat Biproduct": 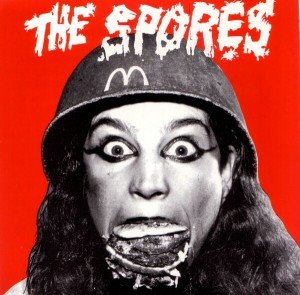 I keep telling the guys at Sudden Death that the Spores need to be re-released... Spores, are you out there? SOMEONE remembers.
Posted by Allan MacInnis at 1:34 AM

I remember the Spores! Used to have that cassette, too, great stuff.

Yeah, well, The Spores have a new CD out on Sudden Death, including great unreleased stuff, by the same name - NEWS, WEATHER, AND SPORES... and there MAY be a reunion show! Yaaah!