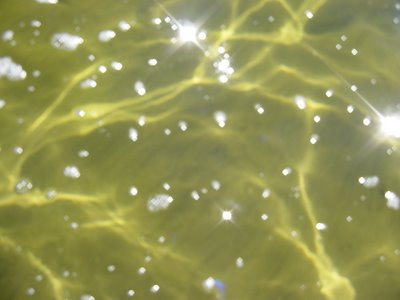 My digital camera is broken. I wanted to stick an image up, so here's an old pic I took of the surface of some water somewhere en route to Tofino. Pretty, innit? Like the song says, we're all water.

Really, what I wanted to mention deals with the Unabomber Manifesto. I am one of those immensely worried that the path we are on, as a culture, is very, very dangerous; as much of a creature of this culture I am, there is also a Luddite in me, who believes that in a way we might all be better off living in cabins in the woods and practicing a sort of self-sustaining minimalist lifestyle -- maybe even communally. I've at times (mostly when I was a lot younger) thought of that as a possible life for myself; I used to spend time living on an island on Pitt Lake where we would split wood for heat and live in a more direct relationship to nature than most and it all seemed very romantic to me (and tho' I was also stoned and self-destructive and very very confused at that time, the ideal hasn't lost its appeal). It's one of the reasons I greatly enjoyed my previously blogged chat with Maurice Spira, who lives a very self-sustaining life on the Sunshine Coast, in harmony with a sort of anarchist idea; and it's one of the reasons the documentary on the Unabomber, The Net -- to play at the upcoming VIFF -- really fascinated me. I dunno, maybe I just read "I have no Mouth and I must Scream" one too many times when I was a kid, but it seems to me that communications technology, the internet, industrialization, consumer capitalism, the increasingly urban nature of our experience, the complexities of what Desmond Morris called, I think, Super-Tribes... that all o' this places us on a path that leads further and further from anything organic in human experience and culture; we cease to be people who exist in an accountable relationship to the natural world or even to our immediate environs, and instead the ground of our being becomes increasingly fragile, unreal, and dependent on things like, well, this very computer you are reading this on. I'm not about to join an agrarian commune any time soon, but I always kinda feel like maybe I should WANT to; the planet, I think, would breathe a vast sigh of relief if many of us did exactly that.

Anyhow, this is stuff on my mind of late, and I thought if anyone else is following the thread of my thought, they might find this article by Bill Joy quite interesting. I haven't read it in completion myself, but I've read enough to know I'm interested... Joy was/is a friend of David Gelernter, who was injured in one of the Unabomber's attacks, and who, in The Net, impassionately explains that the violence the Unabomber used invalidated any political point he might make... which actually touches on another article I'm perhaps going to be writing soon, but we'll let that slide for the time being... Joy doesn't let his loyalty to his friend stop him from taking certain troubling passages from the Unabomber Manifesto quite seriously, which is what makes the article worth reading.
Posted by Allan MacInnis at 1:28 AM

A
Nice article. The Bill Joy article left me feeling cold.
I've been reading "Straw Dogs" by John Gray, it kind of ties in with what your post. He postulates that human levels will keep rising but eventually nature will level us out (Disease, global warming, warfare, rising infertility rate). He does not think technology will save us. It's a good book, worth the read - though I did prefer "Al Qaeda And What It Means To Be Modern" by same author.
I'm going to visit an Eco farm this weekend, a friend lives there. I've never been to such a place before and I hope it's not purely infested with middle class hippys... we'll see.
I know what you mean about wanting to get out and live in the hills. Some form of loose community, with common goals but not living in each others face would be desirable.