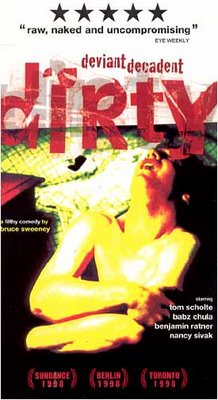 Did I mention that August 4th, Dirty and Kissed will be playing in a double bill at the Vancouver International Film Centre? They're two of the darkest, strangest, most interesting films to come out of Vancouver -- read the VIFC listings here. Stopkewich and Sweeney were both UBC students together -- I believe Sweeney was part of the Kissed crew, in fact, but I'm too lazy to flip open Dreaming in the Rain to check what he did -- but I'd love these films even if they weren't local (tho' I do feel totally proud that these films represent Vancouver in the world. I used to see Kissed alongside the Cronenberg movies in the Canadian film sections of Japanese video stores and get a quiet chuckle out of it, wondering what the Japanese could possibly conclude about Canada, based on these films)... Anyhow, I'm very excited about this double bill. Y'all should read up on them. Y'all should go.

Truth is, though, I'm getting a little dispirited writing about film here. When an amazing work of film art like Police Beat, despite the fact that even Ken Eisner wrote about it in the Straight, though he was neither very enthusiastic nor perceptive -- gets pretty much ignored (on the two nights I went, anyhow) -- I get to feeling like it's a bit of a lost cause. No one comes to my Blim events, I've received next to no feedback for the Cinema Aspirant stuff I've been doing for Discorder... I'm losing faith.

By the way, Police Beat plays again tomorrow night at 7:30. It's your last chance to see it on screen. I may go a fourth time, I like it THAT MUCH. Since it's in anamorphic widescreen and really visually striking, I suspect it will lose quite a bit on the small screen, so I want to get the full effect as often as I can... Tom Charity just directed me to this interview he did with Police Beat director Devor... It might help sell the unconvinced, give you a sense of what the film offers...
Posted by Allan MacInnis at 10:59 PM

I haven’t seen Dirty; I will probably go on Friday. (I liked Sweeney’s first feature, Live Bait, but if I recall correctly I disliked Last Wedding and actually walked out of it halfway through.)

I saw Kissed on DVD just a couple of weeks ago. Certainly unusual, but I can’t say I liked it all that much. Oddly the DVD I rented from Videomatica had the film in 4:3 aspect ratio, even though the DVD box says "LETTERBOX 1.66:1".

VIFC’s screenings were cancelled last night (Tuesday) because of an issue with fumes coming from the swimming pool. They suggested phoning ahead, before attending scheduled screenings for tonight or tomorrow.

Weird. Thanks -- that's unfortunate to hear (swimming pool fumes?). I liked DIRTY a lot more than Sweeney's other two films, tho' I'm surprised you'd walk out on LAST WEDDING...

For the record, it wasn't swimming pool fumes, it was sealant. Renovations were being done to the theatre (apparently, new building or no, it leaks). Things are back up tonight.