Sokurov's THE SUN at the Vancity Theatre 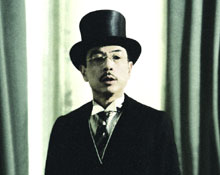 Everyone should go to the Vancity Theatre, also known as the Vancouver International Film Centre, at least once a week. In fact, there is no reason to go to any cinemas downtown other than the Vancity Theatre or the Pacific Cinematheque -- if I thought someone would give me money for it, I'd make a pledge. I mean, what have I seen elsewhere in 2006 that has truly been worth my time? (Okay, so I saw King Kong four times. What's your point?).

Alexander Sokurov, the Russian filmmaker responsible for Russian Ark -- which I did not like -- and for several films that a good Russian friend of mine, whose tastes I respect, assures me are fascinating (but which I have not seen yet, myself) has a new film playing at the Vancity: The Sun, which is described in English on Sokurov's website here. (Rotten Tomatoes reviews here). It portrays the Japanese Showa Emperor as if he were some sort of oddly delicate species of marine animal, which is fitting, since marine biology was a hobby of his; the film is worth seeing alone for a jaw-dropping nightmare sequence in which he imagines the bombing of Tokyo as performed by ghostly winged fishlike creatures flying through the clouds and smoke. It's an odd portrait of an odd sort of power, intended to show the "positive" side of the Emperor's decision to surrender; it underplays his complicity in the war and suggests that, sheltered and eccentric, his life controlled by others, he was more relieved than saddened to renounce his divinity -- the act the film builds itself around, though it in fact occurs off-camera. The Sun is slow but gripping; the intensity of its focus made it difficult for me to look away, though the excitements the film has to offer are all perceptual, and I have my doubts about how morally defensible it is, ultimately, particularly given the steady swing to the right going on in Japan... I'd very much like to know of any Japanese reactions to the film, should any readers know of them. Recall that I lived in Japan for three years, and that I got to know a Japanese far-right winger who still asserts that the current Emperor is divine; the issue is not a dead one, over there, with both the flag and the national anthem remaining very controversial among Japanese leftists, suggesting state Shintoism and Emperor worship, inextricably linked with miltiarism in the minds of many. (This controversy is why neither the anthem nor the flag were made official until 1999. Certain teachers at my high school - usually unionists - would refuse to stand when the anthem played, as a symbol of protest). Liam Lacey of the Globe and Mail has called the film morally indefensible; if anyone here is an online subscriber and can send me the text of the article, I'd be most interested in reading it (but not enough so as to give the Globe my credit card info)... Due in part to Issei (for some reason rendered as Issey) Ogata's superb performance, we end up fond of the eccentric Emperor by the end of the film, and sympathetic to his position, which I suppose would be more acceptable (though less likely!) if the film made more clear the suffering that Japanese aggression inflicted on the whole of Asia; the greatest suffering the film shows is that of the Japanese under American bombs, and the second-greatest suffering suggested is that of the Japanese at seeing their Emperor reduced to mere humanity. Pearl Harbour is brought up briefly, but the rape of Nanjing, Unit 731, comfort women, the treatment of prisoners of war, and the cannibalism to which starving Japanese soldiers were reduced are not mentioned (an overview of other war crimes here; for current Japanese commentary, focused on the controversial Yasukuni war memorial, see here). Oh, doesn't the Emperor look like Charlie Chaplin! Isn't he cute!

...and yet the film is interesting, the performances good, and there may be some reason to view the Emperor as removed from the crimes of Japan... so I don't really know; I wasn't truly troubled by the film until after I'd slept on it; I left the theatre with a mild unease, but felt rewarded at the time... Anyhow, as enthusiastic as I am for the venue, I can't entirely recommend The Sun to non-cinephiles out there; it's an intense, well-crafted, and thought-provoking film experience, and perhaps would reward people interested in history, power, or given to a deep interest in Japan, but it's not going to be to everyone's tastes (even my Russian friend nodded off for a few minutes, as she sometimes does). The film runs til Tuesday. I'd recommend going based on the delightful aspects of the venue alone, if any of you haven't been there yet; there are wonderful things happening throughout the next couple of months, too -- well, I could do without the Chinese martial arts films, but let's hope they get the attendance up. (They keep teasing us with this Harry Smith thing... hope it finally makes it here).

I was at the Walter Murch screening of The Conversation, by the way -- one o' the three lucky bastards who got let in at the last minute, since at least THAT event sold out (as opposed to the generally piss-poor attendance I've seen at Vancity events). I'm hoping that I can get the piece I wrote on it published elsewhere, so I'm holding off on posting it here for the time being. If they don't run it, we'll see what I can do -- figured it couldn't hurt to spread my writing around a bit. Besides, nothing I wrote is as interesting as reading Murch himself.

(Matthew Englander, by the way, has also written about The Sun on his blog, and has included links to yet more blogging on the film. Nice that people out there read each other's blogs -- I too seldom explore the blogsphere, but often it's more interesting than what makes it into the papers...)
Posted by Allan MacInnis at 1:09 AM