Updating the update, just writing over the previous post here... I am back out of hospital and home and havin' fun with Erika - trying to make a game out of changing bandages on my varied wounds (see below, but I've had grafts from all of my arms and legs, as part of a process of building a new, cancer-free tongue out of muscle tissue taken from elsewhere - which process actually failed the first time, requiring a complete surgical repeat of my Dec 16 procedure on Dec. 17th; I also had a tracheostomy, as an alternative to the painful and problematic intubations of my September procedure, which is healing up nicely - it should close on its own soon enough, but a little air still escapes when I cough or belch or fart or so forth). I won't be doing much blogging for the time being, but find my Facebook wall for a few updates. I am doing okay - biggest surgical ordeal of my life, but I am now cancer free (and on a liquid diet, and having to train a graft from my arm onto my tongue to speak and swallow. I am making some progress, but it may be slow). 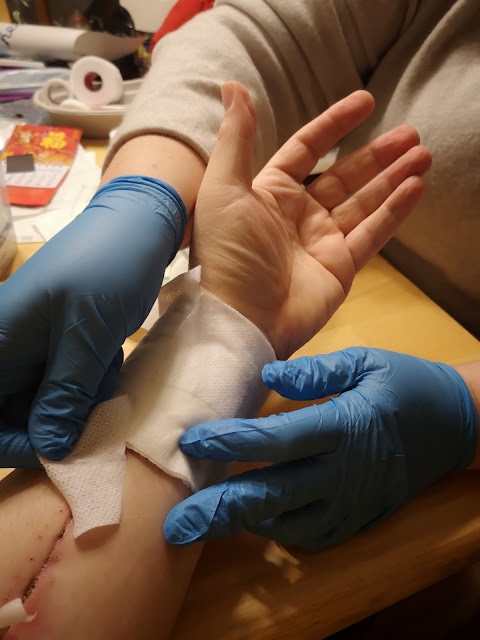 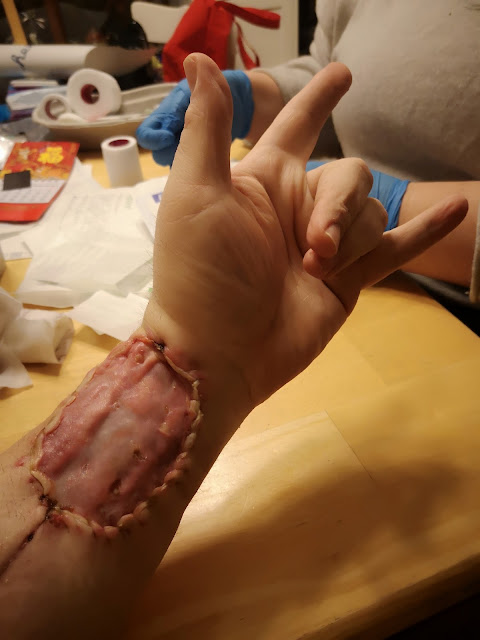 (actually the *second* grossest of my two graft sites on my wrist - the other one has tendons visible!). 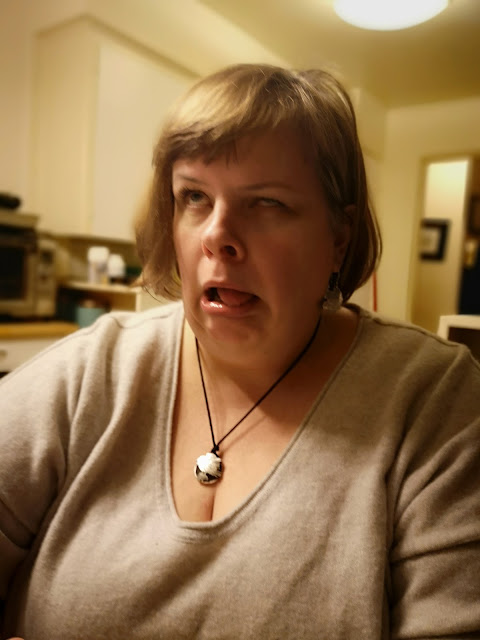 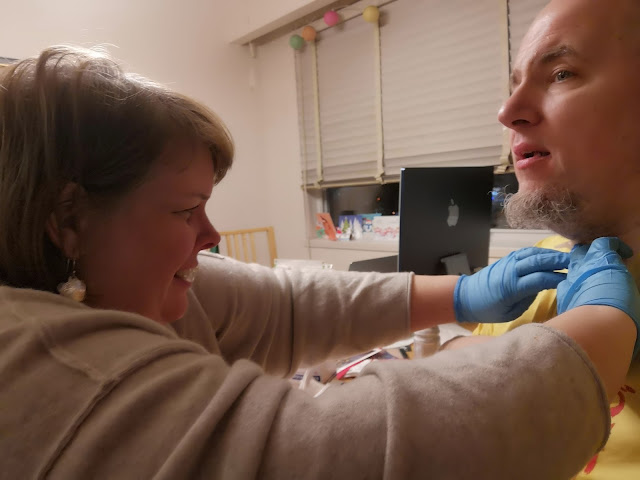 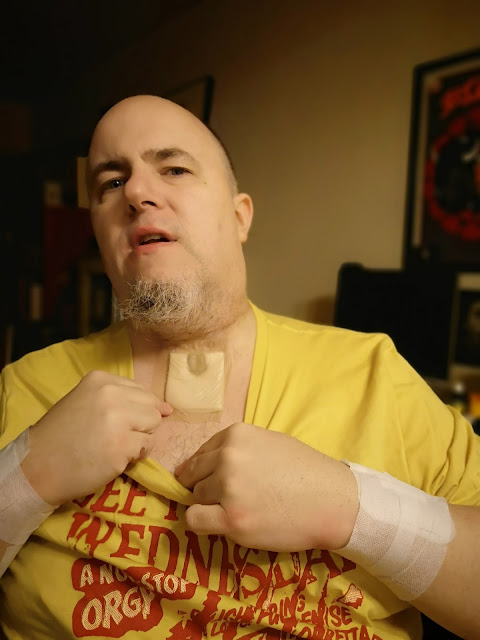 "Relax, babe, it'll be easier if I do this one by myself. Maybe you could take photos?" 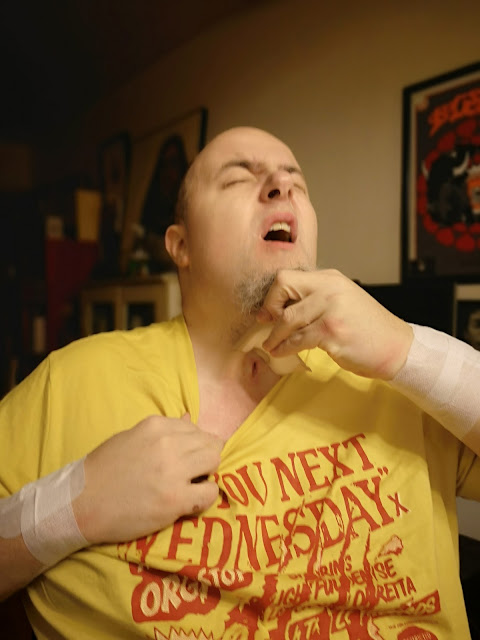 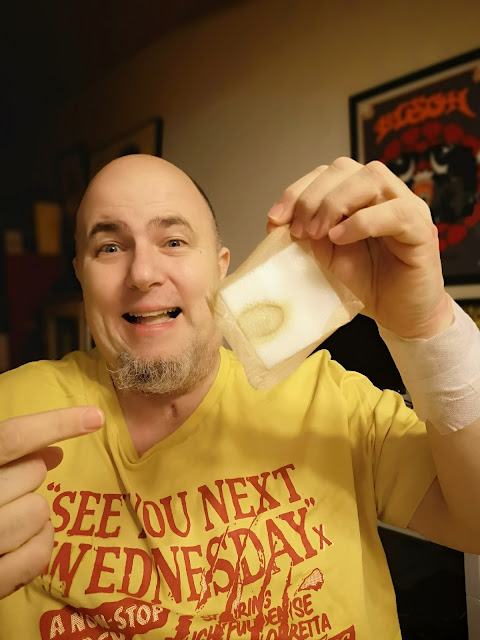 For those of you actually interested in my published writing, meantime, you might want to seek out the newest issue of Montecristo Magazine, a very glossy glitzy publication for an income bracket quite other than mine, who sought out a memoir from me on the early days as a record collector. It's a fun story, mostly focused on Vancouver's old shop Collector's RPM, and touching on a few local characters (Grant, Dale, Phil) who are still active out there, but with a little bit of added reminiscence from Vancouver's vintage Record Row. The context and illustration might speak more to record collecting as it is perceived now, as opposed to how it was for me then, but it should be a fun read (I actually haven't looked at the published version but I trust them - and I've been a little distracted, eh?). I have a few other online-only stories with Montecristo, like this one about the Clash playing soccer with Vancouver punks on the cusp of their first North American tour, or a two-parter on the history of the Cave, which features some familiar faces for those of us on the music scene... part one here, part two here. (You hafta buy the actual magazine to read the record collecting piece, tho' - it ain't online!). 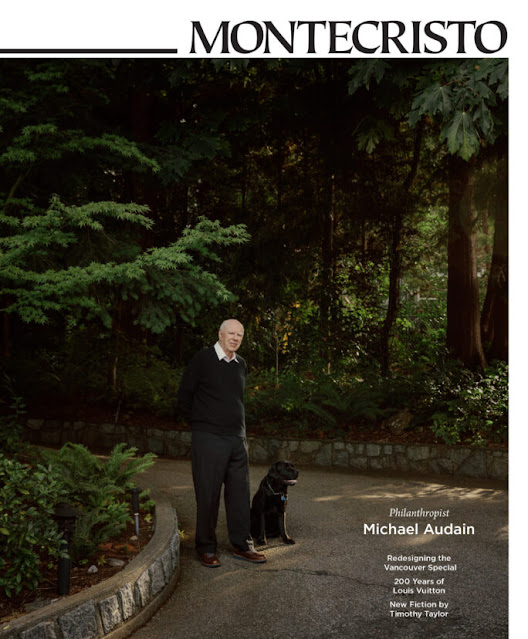 Lots of challenges ahead, mostly involving retraining my throat and tongue to swallow and speak. I'm doing okay, however, am glad to be home, and grateful to have such a caring and playful wife to support me through this rather unusual experience. Might be some time before I blog here again - but I'll post any urgent news.

Meantime, what the hell, the Bowie Ball got its date changed? I was pleasantly surprised to think I might be actually fit to go out in public for a bit! (If you see me, don't expect much in the way of conversation). But what's this, Richard Thompson is coming back to town? (And there's no news about Sparks or EXTC cancellations yet, and Erika got us tickets to see Frazey Ford, and...). It's really not that bad, considering how bad it WAS for a bit there... (The first couple days in hospital were difficult indeed). Of course, COVID counts might make it prudent to skip a bunch of that, and it may be wise to get a booster vax one way or another, but... One thing at a time, folks...!

And Happy New Year, y'all! This is actually being written Jan. 1, 2022, as I sit on the couch, reading the new Jason Pargin (formerly David Wong) for a bit, before heading back to bed...

Posted by Allan MacInnis at 9:30 PM

Teah I owe a good chunk of my Sparks fandom to you... What a great band. I did an interview with the Maels for Big Takeover but it hasnt hit the stands here yet. Will bear Whomp in mind!