EXTC: Inside Out and Upside Down (an interview with Terry Chambers and Steve Tilling) 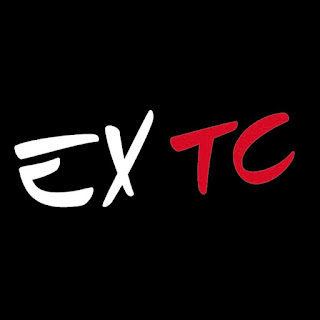 Considering the lasting impact of their legacy, looking back at their near 30-year career, XTC didn't tour all that much. As people who have seen the excellent 2017 documentary XTC: This is Pop will know, though musically active in studio into the start of the 2000's, XTC ceased all touring in 1982, after the band's leader, Andy Partridge, had a breakdown, stoked by his coming off valium, which as a medicated child he'd had a lifelong dependency on. They did do a few live-on-radio shows, and appeared once on TV in 1989 on the David Letterman show, but concerts? No.

But considering that their touring history only lasted from 1976 to 1982, XTC, during that short window, toured a hell of a lot, including - according to attempts to document every gig the band played - three shows in Vancouver, two shows in March of 1980 at the Commodore (one supported by the Young Canadians) and one in October of that year (opening for the Police at the Pine Bowl).

Rickshaw proprietor Mo Tarmohamed - not too slammed with the duties of running the Rickshaw to tell me he is a "big XTC fan" - was at one of those Commodore shows. He even saved the review of said concert(s?) for over 40 years, written by one Stanley Westby. Mr. Westby, I am presuming to copy and paste your words here. I am making no money on this, though I might cadge an EXTC ticket. If you object to your words reappearing in public after so long, do get in touch and I will remove them. 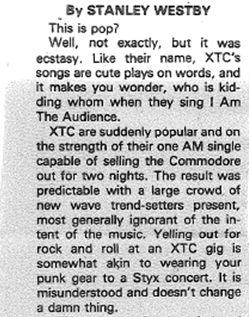 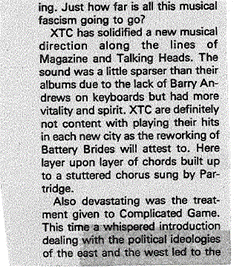 The band coming to the Rickshaw on March 20th of next year is not XTC. It is EXTC - a splinter project driven by one original member, drummer Terry Chambers, performing (mostly) early XTC songs (but also working on new material!). They are not pretending to "be" XTC. They ARE proceeding with the blessings of Andy Partridge. And they'll be playing mostly songs drawn from the vital period of 1976-1982, when they were a live band, after which Terry Chambers left the band (explanations of which can be found in the XTC: This is Pop documentary, so I didn't ask Terry to repeat them here). You can also find the story of the band on their website, and a description of early live shows they played - complete with setlist - here. I did an email interview with Terry and with EXTC vocalist/ guitarist Steve Tilling, who also played with Chambers' previous project with XTC's Colin Moulding, TC&I. My questions are in italics, but Steve and Terry's names remain present so you can tell them apart! 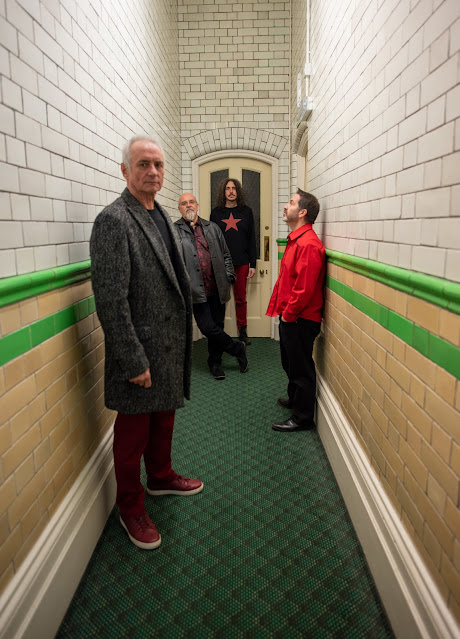 Allan: I noticed that "Dear God" and "Grass" were on a past setlist but - unless I'm missing something - both of those were recorded without Terry's involvement, originally. Local musician Ford Pier comments that they have drum sounds very unlike Terry. Will those songs remain on the set? Does Terry change up the drums, or follow Prairie Prince's style, or...? (I do think it's a bit of a cheat to include those songs, but then, I love those songs?

Terry Chambers: At this point, both Steves (Steve Tilling and Steve Hampton) are playing "Dear God" acoustically, which gives the set a bit of breathing space. "Grass" is also in the set. I play the drums in a similar fashion to the original recording but with my own touch.

Steve Tilling: Terry left XTC in 1983, so we’d be leaving out a lot of great songs from XTC’s catalogue if we only did tracks from his time in the band. Many XTC fans like songs from every era, so we don’t want to deprive anyone from hearing them. Terry interprets them in his own way so that’s another interesting aspect for people. For me, Terry makes the songs sound like they’re from the classic era.

What is Steve's history with XTC? Was he lucky enough to see them live? Does he have favourite songs or albums by the band? (Did he learn anything about them from learning to sing them - surprises about the lyrics, surprises about Andy's voice...?)

Steve Tilling: I’m a Swindonian, so I was always aware of the band. I was 11 when they stopped touring in 1982, so never got the chance to see them live. I’d liked the hits I’d heard on the radio and seen on Top of The Pops.

But I didn’t really get into the band until I was 21. I’d had a car accident and was in hospital. My brother brought in XTC’s Nonsuch CD to play on my Walkman, and I loved what I heard. That was the start of it all.

It's hard to pick favourite songs, but I think "Senses Working Overtime" is about as perfect a song you can get. I love "That Wave" and "Then She Appeared" from Nonsuch, especially the lyrics. "Are You Receiving Me" for the energy and catchiness: it's one of the best from the early years, I think, and I’d love to do that in the set. And "Easter Theatre" from Apple Venus Volume 1, especially the vocal section at the end. Favourite albums are Black Sea, Drums and Wires and Nonsuch. I also like Wasp Star, which is a marmite album for some people, but I love the songs.

Learning XTC songs vocally and instrumentally was quite revealing. Andy Partridge’s voice and guitar parts are unique, and it felt like I was relearning the guitar and rewiring my brain. Vocally, Colin Moulding sings a bit higher than Andy. But it’s impossible to be a clone of either, so don't even try!

How did Steve and Terry first meet? (Had Terry seen any of Steve's bands before?). I gather Steve and Terry toured previously with Colin Moulding; was there any discussion of having him in EXTC?

Terry Chambers: Steve and I met during the auditions for TC&I – the project of Colin Moulding and myself – and Steve was the successful applicant. We did eight gigs in total, all in Swindon.

Steve Tilling: I met Terry when a friend (Stu Rowe - collaborator of Andy Partridge) recommended me to Terry and Colin, as they were looking for a guitarist for their TC&I project. There was no discussion of Colin being in EXTC, because he said he didn't want to tour. That’s why EXTC began. (More info here: https://www.extc.co.uk/story/)

Whose idea was the name EXTC? This is, whatever else one might say, the VERY BEST POSSIBLE NAME for this sort of thing - trumping, for example, "From the Jam" and Nick Mason's Saucerful of Secrets by a WIDE margin. My compliments - but has it generated confusion? (I've been corrected by people on social media who weren't aware of the project - "don't you mean XTC?"). Has anyone gotten upset about it? (It's VISUALLY different from the band's name, but...)

Terry Chambers: I had a conversation with Andy Partridge regarding this project Steve and I were putting together. Andy said, "you can’t call it anything other than EXTC."

I don't THINK the documentary got into the history of the original name of XTC. Whose idea was that? Did it have evocations other than the word "ecstasy?"

Terry Chambers: XTC became the band name after Andy Partridge saw a film featuring comedian Jimmy Durante in which he says, on listening to a musician play, "I’m in a state of X… T… C… ” Capitalised, the three letters also had the advantage of standing out in print.

Someone in the doc - not Terry - describes the drumming in "Making Plans for Nigel" as "upside down." Terry, would you agree with that?

Terry Chambers: I would say it's more inside out than upside down!

Who are Terry's favourite drummers? (He reminds me at times of Peter Prescott, tho maybe Prescott is a bit more of a tribal troglodyte than Terry - I should note that I love Prescott's drumming).

Terry Chambers: All the greats, too many to mention.

I realize this is probably close to a boilerplate question, but I think we should address the unconvinced and the naysayers. It seems to me that there are three possible camps for XTC fans to belong in: Camp One (which I belong to) is - holy shit, a professional band touring with the blessings of Andy Partridge, doing XTC's early catalogue? COUNT ME IN! Camp Two (who I guess are the target of this article, the unconvinced) is: "Wait, Andy and Colin aren't there? But... what, it's the original DRUMMER, and it's the early catalogue, mostly...? Hmm. Well, maybe." And then Camp Three, the naysayers, are the HOW DARE THEY people - who will never get on board no matter what we say.

Terry Chambers: I don’t know anything about camps. I think the best thing is to come along and listen to EXTC for yourself.

Steve Tilling (re: "Are there camps I'm missing?"): That covers it, I think.

Of the responses you've seen on social media and such, can you give us a breakdown of what PERCENTAGE of XTC fans fall into each camp?

Anything you want to say to the three camps?

Have you had any really interesting "Road to Damascus" reactions from people in Camp Two - press or otherwise - who saw you live and were converted?

Steve Tilling: Yes, quite a few people have said how much they enjoyed it. It's always nice to know you've overcome skepticism.

Do either of you have any history of Vancouver? Terry, have you played here since 1980? Any memories of the city? (For a band who didn't play many live shows, you made it here three times, which is impressive - lots of my friends saw you!)

Terry Chambers: I remember Vancouver's excellent seafood and having a great crowd. XTC gigged constantly for five years – probably more than any of our contemporaries. We went to places others feared to tread.

I'm always curious what people like to do on the road, when they have free time. Ray Davies told me once he likes to see how the Guinness tastes in different cities (ha!). Justin Sullivan was hoping to get in some whale watching (it didn't pan out). Lemmy I think mostly read on the road (he was reading a CJ Sansom novel when I talked to him). How do you entertain yourselves? (Have you earmarked stuff you'd like to do in Vancouver?)

Terry Chambers: The most important thing is to get as much rest as possible on the road.

Steve Tilling: Resting my voice, and trying to sleep mostly – touring’s hard work! A lot of reading too. Not very rock n' roll, I know.

The Dead Kennedys have repeatedly said that they hope that someday Jello Biafra will rejoin them. Is that ever in the back of your mind - that if there's enough interest and excitement, it will somehow lure Andy and Colin and Dave out onto the road again, or is this as close as we're ever going to get?

Terry Chambers: As Andy, Colin and Dave aren't involved in the live performance aspects of EXTC, I think this is the closest anyone will get. 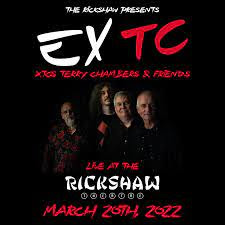 Posted by Allan MacInnis at 9:26 AM