Was going a bit stir crazy yesterday, two days before my surgery - which happens tomorrow at a yet-to-be-determined time. Had barely gone out for a couple of weeks, staying home to protect myself from COVID (lest it delay my surgery) and get writing done. I'm happy with my progress, here: I did a major interview with a major band (enlisting the help of David M. who knows their work more than I do), did my Kier-la Janisse piece (a few posts ago) and got a good start on Alan Zweig (which I hope to put up later today). It's been productive, and I'm grateful to my employer (and to CUPE) for the stellar benefits package that allowed me to work from home again - but I *needed* to get out of the house a bit.

Interviewing someone with a co-interviewer was an interesting experience. I often have anxieties after an interview that I didn't get what I needed, especially if I had interesting questions planned that I didn't manage to get answers for - but in fact, the conversation, I see now that I've gotten it transcribed, was pretty rich. M., weirdly, brought some seriously highbrow elements to it, getting into a discussion with the band of Schoenberg and 12-tone opera, which is an area that I cannot really access (the prospective title of the piece is "Somewhat Like Stravinsky, or Schoenberg for Now," though I do wonder if my editors will change that. M is of a more even keel than me, I think, and emerged from the conversation pretty confident it went well, while I was afraid to get transcribing, with every stumble magnifying itself in my memory and the things we *did* get that were interesting having faded, a little. Ultimately it was a success, but I worried for a day or two that it had been a failure.

Anyhoo... you'll see who we interviewed when the next issue of Big Takeover comes out. 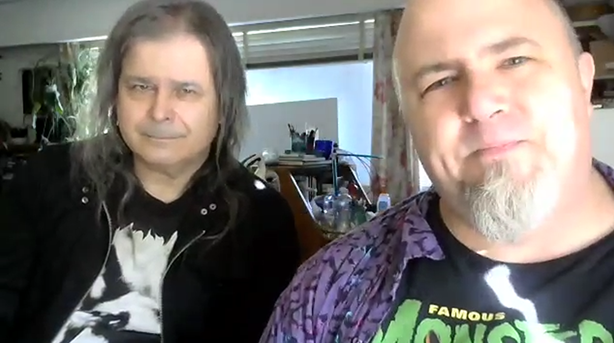 Between working from home and getting writing done, I was feeling extremely restless, and aware that soon, I would be stuck at home even moreso, post-surgery; so yesterday, once the article was submitted, while I still could - I went thrifting, pretty much my only excursion out of the house, a few food runs aside, in the last few weeks since I discovered the cancer was back. There's a Salvation Army that I like, where I almost always find a few interesting records; yesterday was no exception. They had two Ferron LPs (ones I already have, and left behind - Testimony (which has Stephen Nikleva on it, and the next album, Shadows on a Dime, which has my favourite Ferron song, "It Won't Take Long." But I'm always happy to run into records I like when thrifting, even if I don't need them; they're like friends saying hello, and I'll move them to the front of the stacks so other people can find them). They had a couple of Sesame Street albums, too, which, again, I didn't buy, but which have begun to beguile me when I see them when thrifting - they are probably pretty fun to listen to. And they had two LPs I actually needed, the final two Oscar Brand Bawdy Ballads LPs that were missing from my collection, Volume 1 in the series and the "Goes to College" one. 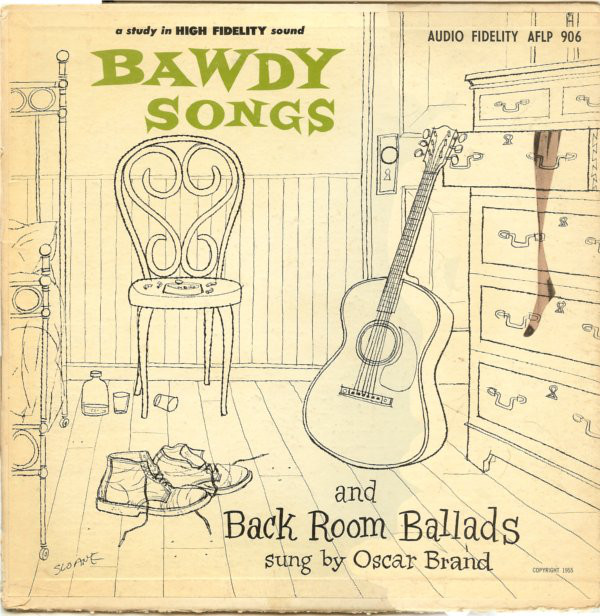 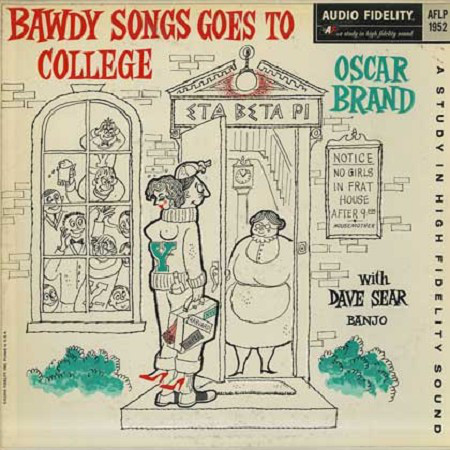 I am not a Brand completist - there are dozens of albums that he released before, between, and after albums in this series, some of which, no doubt, are fun, but they're mostly, it seems, less funny. I've wanted, for awhile, a complete set of this particular series, however - which at some point, after having nearly identical titles for volumes 1-4 (except the words "volume 1," "volume 2," etc), become slightly less obvious (I remember thinking that Bawdy Western Songs, volume 6, which does have the words "volume 6" on the title, might have been the sixth volume of a different series, but no, it isn't; there is no "Bawdy Western Songs" vols 1-5). 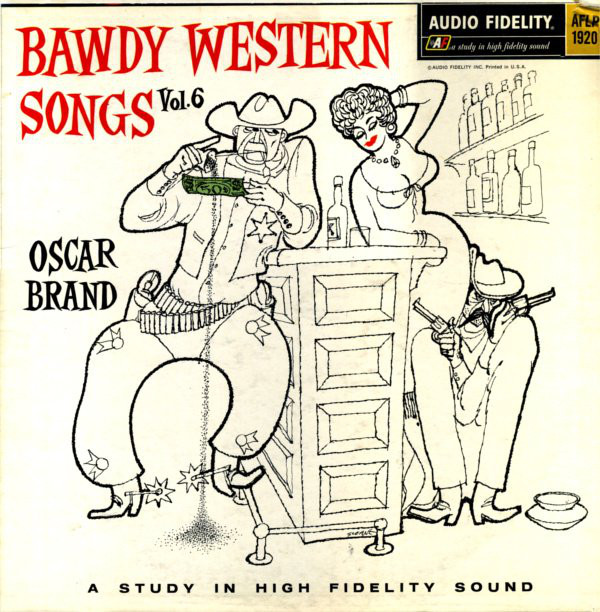 Some variation in titles aside, however, the common elements - cover art and fonts; vulgarity that is gleeful, but not explicit, since these were coming out in the 1950s; and the mostly common presence of banjo accompanist Dave Sear - make them an identifiable set. Like, it is obvious Rollicking Sea Shanties belongs to it, as well, but is lacking even the common denominator of all the others, the word "Bawdy." 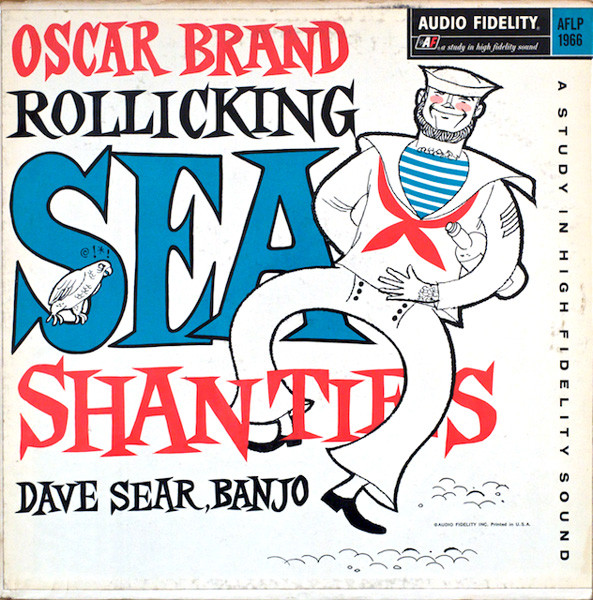 Because volumes 1, 2, and 3 all have an acoustic guitar prominently featured in the art, and no people (or, in the case of volume 3, only an arm poking out of a bed), I actually thought I might have had the first one already, when I found it yesterday. I considered not buying it, even, then thought I would go ahead just in case and pick it up; I could always just gift it to someone if it turned out I already had it, which I've done before with repeats in the series. I was doubly delighted to get home and find I didn't have it in my collection at all. I now own Bawdy Songs and Backroom Ballads Vol. 1-4, Bawdy Sea Shanties, Bawdy Western Songs, Bawdy Songs Goes to College, Sing-Along Bawdy Songs and Backroom Ballads, Rollicking Sea Shanties, and Bawdy Hootenanny. I have one other related album he did, Brand X, which retains some of the features of the above, but, coming much later (in 1971) doesn't shy away from the profanity that is dodged above, and which is missing the cover art commonalities, which makes it a bit of an outlier. Some of other Brand's stuff is a bit more "straight folk," though I did send another that I had, Every Inch a Sailor, to Jello Biafra, because it's got a song on it about Guantanamo Bay on it.

I am under the impression no one cares about Oscar Brand records but me. I've never known anyone else to go on about them; they sell for peanuts on Discogs, where there is no shortage of them; they're common enough in thrift stores. About the only other evidence I have that anyone but me loves these records is that the Meat Puppets covered "Blinded by Turds" at an in-store that got released on a DVD, retitling it as "Wonderful Song" (though of course, I cannot be sure Brand was their source for that song, which they may have heard performed by someone else; that will be a very fun thing to discuss if I ever interview the Meat Puppets, but I don't expect it will ever happen, since I imagine they might have difficulties getting into Canada).

After my adventure, I went to meet Erika, and she took me for dinner at the Keg, which was delightful, but a bit challenging (because my jaw and throat are both a bit inflamed/ swollen, which was a side-effect of the cancer back in 2017, as well; I've even had a mild earache for days in the side with the cancer, which I also recall from last time). Steak is a little bit on the "requires effort to chew" side, but it was delicious - we had top sirloin, and I had mashed potatoes, garlic shrimp, and a chocolate milkshake. One of the anxieties you get about tongue surgery - besides the potential impact on speech - is that it might impact your sense of taste; and even if it doesn't, it certainly will reduce me to eating soft foods for awhile. Anyhow, I've been a bit impulsive about wanting to eat certain things before I can't anymore - like buying a Kit Kat bar. It's not like I can vividly recreate the flavour of it in my memory, sadly - I'm not sure if that's a skill other people than me have - but it was nice to have one last Kit Kat, in case I never get to taste a Kit Kat again.

Wasn't the case in 2017, and I presume it won't be the case in 2021, but your mind goes a bit funny when they're going to cut an unknown-sized strip of your tongue out.

In any event, I now have a complete Oscar Brand "Bawdy" series, so there's that. Will have a couple of other VIFF-related articles up before Wednesday, I hope. I'm told Azor is "fabulous" by Adrian Mack; the description of it reminds me of Costa-Gavras' Missing, which is a film I admire a lot, but I doubt I'll get to that in time.

Posted by Allan MacInnis at 7:34 AM