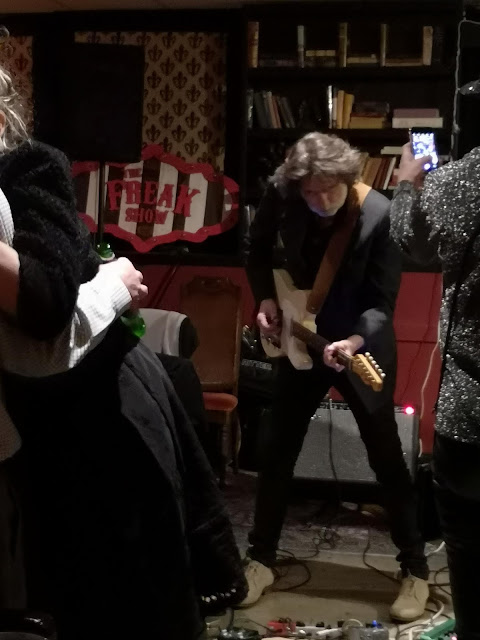 The Frinks sure dug deep last night at Lanalou's. I knew about 20% of the songs they played last night, and mostly the really obvious ones, like "Trouble Every Day," "Sloop John B," "Eight Miles High," and "Mr. Soul." While everything was immensely enjoyable and very easy to digest, it felt like I was being schooled in how much great pop music I know nothing about... like Michael Pagliaro's "What the Hell I Got," one of two Pagliaro tunes that got played, Scott McLeod told me; or the Sir Douglas Quintet's "Mendocino;" or even Byrds songs I'd missed, like "I'll Feel a Whole Lot Better"(I actually don't know my Byrds that well, I must confess). I recorded a little video of them, before they really got cooking, doing a song by a band I've never heard of before "Concrete and Clay" by Unit 4+2) and a Neil Diamond tune... there's a pretty fun who's-who of Vancouver notables dancin' in the audience. Opening act Preston & Fletcher rocked out too (especially on Nick Lowe's "Cruel to be Kind" and the Pretenders' "Middle of the Road" and whatever their Pagliaro tune was), and it was a treat to see Eddy Dutchman (introduced by his real name) sing the Stones' "Tell Me" late in the Frinks' set, when everyone was drunk and dancin'.

All in all a great night, lot of fun, with our friends and I demolishing the equivalent of three pitchers of Old Jalopy pale ale, plus two champagne shots and a Guinness for me, and ample snacks (Lanalou's put out tons of complimentary wings and quiches and other treats, and we ordered some of their fine fries.) Well worth the $25 ticket, and such great music. May we all survive the year so that we can Frink it up again in 2020.

(I was worried to see Betty wasn't on shift, though. I hope I didn't get her in trouble! Betty is definitely a draw, guys: I wasn't actually that mad...)
Posted by Allan MacInnis at 2:00 PM

It could have gone either way though...