Richard Matheson weekend: Duel and I Am Legend, revisited 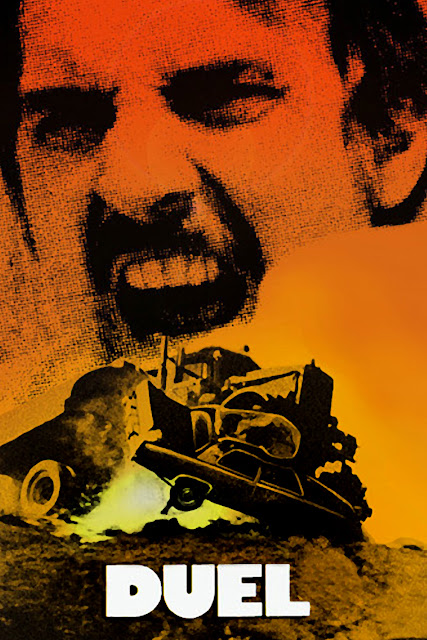 I hadn't realized that Steven Spielberg's first film, Duel - based on a Richard Matheson story in which a lone car driver squares off against a giant truck, driven by an unseen madman set on his destruction - was available as a widescreen hi-def Blu-Ray, until stumbling across it at Sunrise Records the other day, for a mere $11.99. I had considered playing it for Erika before, but it would have been my full-frame, standard-defintion DVD. But though the film (shot in 1971, and released theatrically in 1972) was originally shown in a 1:33 aspect ratio, the theatrical cut - which was used as the basis of the Blu - looks superb, was prepared with Spielberg's involvement, and presents much better on a flatscreen than the old DVD ever could. Very nice colours, crisp details. Like every cut of the film, it feels a little padded at 89 minutes, and makes me wonder what the original 74 minute long broadcast version would play like (one scene apparently added to flesh it out for theatrical release, involving a stalled school bus, is perhaps my favourite scene in the film, but some of the filler, like a conversation between Mann and his wife, feels exactly like that: filler). It's a very enjoyable film, though. Keep an eye out for the face of a young Spielberg in the bottom right hand corner of the screen, reflected in the phone booth when Weaver is trying to call the police at the Snake-a-rama. This is definitely a worthy upgrade.

Even more exciting: having gone, prior to sitting down to Duel, on one of my "Mr. Movie Teacher" spiels to Erika - who couldn't care less, but has been now exposed to a few Matheson adaptations, including a couple of Twilight Zones and The Legend of Hell House - I realized that she had never seen I Am Legend, a film that I have come to think of as a disappointment and wasted opportunity (I wrote about it here, giving it a better review than I recall having done, but my dominant impression of the film since has been one of "meh"). The film has a great start, is fresh-looking and engaging and likable for most of its runtime. My concern, as an admirer of Matheson, was that no previous version of the film had really come close to the key idea on which the novel hinges (spoiler alert!): the idea that the vampire-killing hero is in fact himself a monster, presuming his "normalcy" gives him the right to dispense with the infected "Others" around him as he sees fit, since, you know, they aren't really human. That revelation - that he is, in fact, WRONG in what he's been doing - comes to the protagonist at the climax of the book (which I'll say no more about). His "legendary" status is, thus, in the eyes of the monsters, not fellow surviving humans; and he is only a legend in the way that vampires themselves are legendary - as an evil. I can't recall how the old Vincent Price version of the story ends, exactly (The Last Man On Earth, that is); but the Charlton Heston take on it, The Omega Man, is very much a reversal of this; Heston becomes a Christ-figure, sacrificing himself (and his "sacred" blood) for the salvation of humanity. It is to THEM - the survivors, spared the plague - that he is a legend, and his being a legend is a positive thing. He hasn't been WRONG all along, he's been right. Even if The Omega Man doesn't do anything with the original book's title, it betrays the whole point of the original text in favour of a more comforting white-guy-as-hero message. I was really excited for the Will Smith version of the film, and totally engaged by the first three-quarters, because I expected it to be smarter and more sensitive than The Omega Man, and to maybe be truer to the source text.

Then you get to the ending, and blam: it cops out and repeats the basic idea (with some minor variants) of The Omega Man's ending, Neville sacrificing himself for humanity, having been right all along. Like I say, apparently I gave the film a good review back then, but in subsequent years I've come to think of it as a crock of shit, a wasted opportunity, a mere remake of The Omega Man, unworthy of the title of the original novel.

But having talked about the film with Erika the other day, I glanced at the Blu-Ray at a pawn shop on the off-chance that maybe there was an alternate ending, maybe something more in keeping with Matheson's original intention. It's the first time I'd considered revisiting the film in eleven years - and guess what? There IS an alternate ending, which in fact was the film's ORIGINAL ending, changed because, yep, it scored poorly with test audiences (who obviously hadn't read the book and wanted nothing thought-provoking from their cinema, just more reassurance that they are "right" and always have been). In fact, this alternate ending IS in keeping with the Matheson original, and vastly more interesting than what played theatrically. It changes the film radically from what we previously saw, but in fact makes perfect sense as the climax of the movie. The film still has some Will Smith cutesiness you have to rise above, and it still has CGI monsters instead of human actors as the "vampires," but it is possibly the most faithful adaptation, idea-wise, of the novel yet to be filmed. Turns out it's well worth revisiting the film on Blu-Ray, to see what test audiences were too dumb to appreciate in 2007.
Posted by Allan MacInnis at 9:10 AM

Oh - and Erika liked it too, tho I think not as much as Francis Lawrence's most recent film on home video, Molly's Game, ehich she got out of the library. Also really enjoyable!