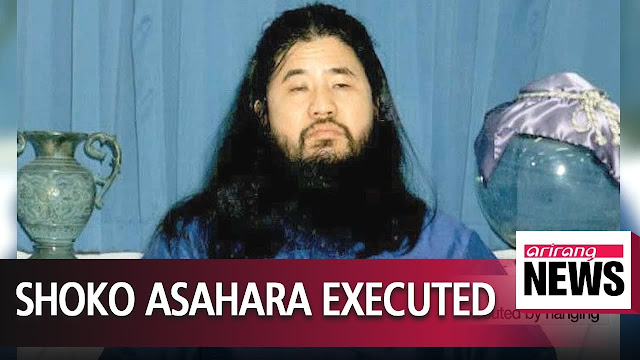 The Aum Shinrikyo sarin attack on the Tokyo subway happened in 1995. I lived in Japan from 1999 to 2002, during which time Aum - an oddball Japanese religious cult organized around a charismatic leader named Shoko Asahara - was attempting to rebrand itself as Aleph to avoid public scrutiny and distance itself from its more psychotic manifestations (which involved more killings than just the nerve gas attack; you could probably compare them with People's Temple or the Manson family in some of what they did and believed, which included ideas about an impending apocalypse, I gather, and a leader who had sexual relations with many of his members). There were still controversies circling - particularly in neighbourhoods where group compounds remained; who wants to live next door to a murderous doomsday cult? Most interesting, all through the time I lived there, there were cardboard "standee" cutouts in the train stations of three key members, both male and female, who were wanted for their role in the attacks, who remained fugitive. I could read very clearly the word "aum" in hiragana on the cutouts, though the one time I attempted to engage a Japanese - I think a transit security officer, as I recall - in conversation about the cutouts, he denied that that's what they were, maybe to avoid shaming his country in the eyes of a foreigner or something. The standees were similar to this poster (no idea if these folks are still wanted). 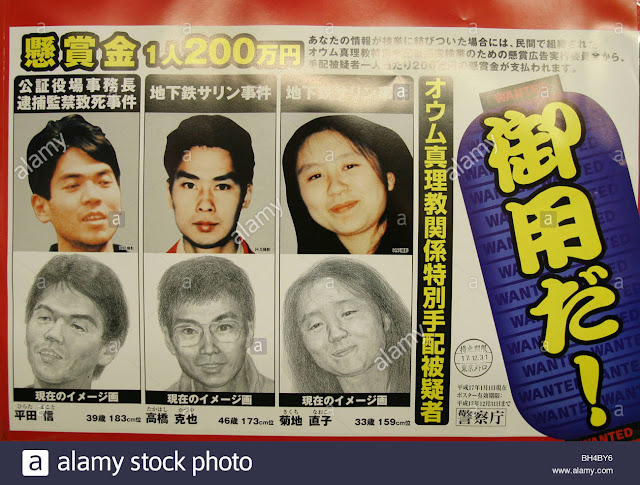 Weirdly, seeing these criminals makes me thrum vaguely with nostalgia for my time in Japan, since I saw their images at every train station, everywhere I went in the country. At that point, Asahara was in custody and sentenced to be hanged. It was all reasonably interesting, and when I came home, I actually read a book about the attacks, though I've forgotten much of the content of it.

All of this came up again on Facebook recently, after I read and posted that Shoko Asahara had been, along with other remaining members of the group, actually executed. It took them 23 years to hang the man, which seems a really long time. To my surprise, one of the people who chimed in was Pointed Sticks vocalist Nick Jones, who was IN Japan at the time of the attacks, long before the Pointed Sticks regrouped to tour there. "I was there with the Stones," Nick told me afterwards. "We were traveling back to the hotel in the morning, then catching a flight to Osaka or Fukuoka, can't remember." When the attack happened, he was four tube stations away. "By the time the plane landed, that was all anyone was talking about," he wrote on Facebook. "The horror and panic in Japan that night was palpable."

Jones wasn't particularly disturbed, in his Facebook posts, to hear that Asahara has been hanged - is more troubled, as am I, that the government spent so long to get around to it. Apparently reaction in Japan to the executions has been mixed, and also includes some disdain for the law's delay. Generally I disagree with capital punishment but some crimes are monstrous enough that it's really, really hard to mourn the perps.

As for Nick Jones, there are no Pointed Sticks gigs confirmed for the moment, Nick says, but there will be a Frank Frink Five show New Year's Eve at Lanalou's, which actually sounds like a pretty great way to celebrate New Years. I still haven't brought my wife to a Frank Frink Five show; maybe this will be the year. Meantime, happy belated birthday, Nick!