July 20th: China Syndrome and the Circus in Flames, plus the Judges, Rogue Fest

I barely get to go out to gigs these days, and I barely get to do any writing. When I am not actually teaching, I am prepping, marking, researching lessons, or tutoring. My hands are sore from typing and/or holding pens. I have a generous backlog of assessments to mark and a mounting heap of administratively-related paperwork that I'm behind on. When the work-work is done, it's enough just getting my share of the housework done so Erika and I can zone out for a couple hours watching a vid (we've been visiting some old Stephen Soderberghs, including ones I thought trivial when I first saw them, and having a fair bit of fun doing so; plus I asserted the blu-ray widescreen edition of Stephen Spielberg's Duel at her last night, which looks bloody great and is a cheap buy, if you've missed it). 90% of the music I get to listen to is on headphones in transit. I don't even have the time for procrastination; there is a constant feeling of having to stay with it, so much so that the anthem of the week is the Angels' "I'm Scared" - "I'm scared of being scared/ tired of being tired." Going to have a bit of a reduction in work hours come August and maaaaan am I looking forward to it.

All that said, I still do try to keep a toe in the music world. I did something on the Judges for the Straight the other day - the new punk band led by  Jay Raymond, formerly of the Likely Rads. I don't really know Jay, but I've enjoyed chatting with him (and the last time I ran into him it really WAS in front of the Fuller Watson in Maple Ridge, if memory serves). Plus, umm, he's helping install a car stereo for my wife's Accord today (yep, folks, this particular article is PAYOLA-DRIVEN, tho' I've seen the Likely Rads a couple times, and am happy to support Jay's new band - Opening Statements is a fun fast hardcore mini-album, and I think marks the first time I've actually paid something for a download off bandcamp). 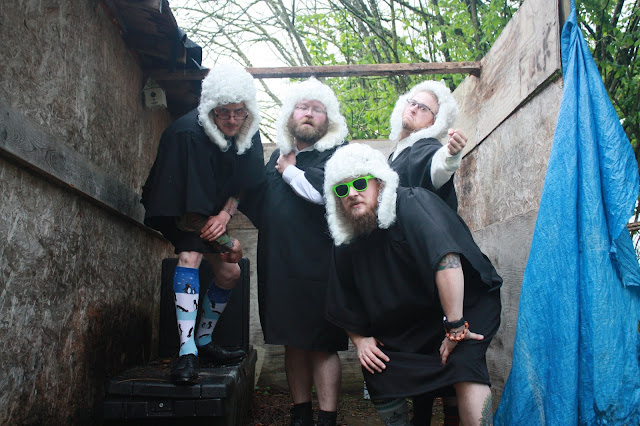 I didn't actually GO to that Judges gig, mind you - gigs that run past 1am in Vancouver are off the menu when you have to commute to Burnaby and be up at 6am the next day - but I think I WILL be making it out to the Byrd pub in Surrey on the 20th for two of my favourite local bands, the Circus in Flames - whom I wrote about here and here - and China Syndrome (whom I've written about in a few places but the best is here). Both bands boast smarter-than-your-average-bear lyrics; they're a bit musically dissimilar, with Circus in Flames - fronted by Doug Andrew, long a member of the Vancouver punk scene - offering a sort of dark, parched-throat Americana (they'd be a great opener for Nick Cave and the Bad Seeds or Tom Waits) and China Syndrome, doing guitar driven power pop. It's been too long since I saw either band. I said hi to Doug at the Rickshaw the other night - where I briefly popped in to see David M. and Jesse LeBourdais at the Fight Back festival - but I missed his set by something like ten minutes. The last time I caught China Syndrome, they were doing a set of almost-all-new songs at the Princeton, off the forthcoming album, and I really enjoyed all of them (which is not usually my way; I usually like to get to know a song on album before I hear it live, find it hard to process songs I've never heard before in a live setting; by the time I've figured out what's happening, the song is over, and tends to vanish in the mists of memory, since I have a poor recall of things I've only heard once... Erika thinks it a bit funny that I do - and sometimes assign - "homework" for gigs but I seriously want to be able to make the most out of seeing bands live, which I find is aided greatly by actually knowing their material beforehand; there'll probably be some China Syndrome and Circus in Flames on my commuting playlists this week, to freshen my memories of their material).

And for the record, I have no idea who the Campfire Shitkickers are, but I like their name. 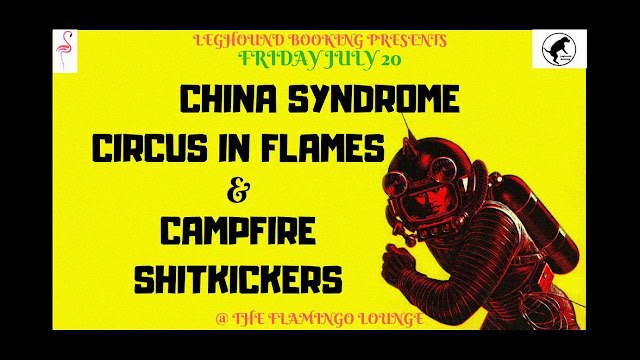 It's funny... I think the last time I was at the Flamingo, it was actually to see strippers, maybe around 1995, as part of the run-up to someone's wedding. Strangely enough, given my work schedule, it's actually the most convenient place (along with the Heritage Grill in New West) for me to see gigs at the moment; I can just stay in Surrey after class on the 20th until the bands start. I wonder when the last Skytrain back to Burnaby runs? If I'm lucky enough to find a well-lit corner, I'll be able to get some marking done between bands... "sorry, I spilled a bit of beer on your paper, Akim - but you wrote really well!"

(I have no students named Akim at the moment, note; this scenario is entirely fictive).

Oh, and for those of you not otherwise engaged there will be a free festival of roots music - Rogue Fest - on or near Granville Island Sunday the 29th, including Sue Malcom, the Rocket Revellers, Viper Central and Van Django. I don't think I'll be able to make it but the event info is here.
Posted by Allan MacInnis at 6:55 AM