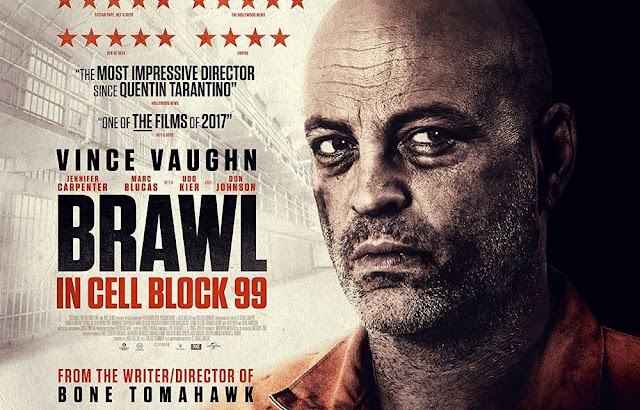 I like S. Craig Zahler. Haven't read his novels, haven't seen all the films he's associated with, haven't met the man personally, but I've said plenty about Bone Tomahawk (here, for example), a very fresh genre film that shows intelligence at every turn and makes choices - especially the casting of Sid Haig - that suggest Zahler is a kindred spirit as a movie fan. Zahler can be outlandish - for example with some of that film's gore - but MOSTLY operates with a restraint that makes you feel confident that his success (should he have a mainstream hit) won't go to his head, unlike certain other movie geek filmmakers we might mention (one of whom, hint-hint, is mentioned on the poster above). I'm pretty excited to see his upcoming, Vancouver-shot police brutality thriller, Dragged Across Concrete, starring Mel Gibson; I'm seriously hoping it gets a theatrical run. Meantime, I felt trusting enough to buy Zahler's new film, Brawl in Cell Block 99, having read nothing about it, when I stumbled across it at Sunrise the other day.

I was most pleased. Some of its gore is extreme enough that it made not only my wife but ME flinch - I actually missed one of the varied "head/ face crushings" on display because I yelped and looked away when it happened, and didn't want to rewind and see what I missed (I am confident that it was very, very gross). But if you can take that sort of thing, and if you don't mind very male-centric, violence-heavy prison films, and (best of all) if you want to see someone completely and utterly rehabilitate Vince Vaughn from his smarmy/ cutesy / smirky tendencies and make a credible, menacing tough guy out of him, this is a movie that will please you. There are maybe some quibbles possible - Jennifer Carpenter's character is under-developed a bit, perhaps because Zahler didn't want to get too distracted from the film's ruthless trajectory, and there are unanswered questions about Vaughn's character that will leave you wanting more... but it's still really, really good - terrific craftsmanship, gripping set-pieces, and a very likable dark humour throughout. Plus the Sid Haig this time is Udo Kier. (Have those two ever been in a movie TOGETHER, I wonder?). It kind of reminded me at some turns of the Barbet Schroeder remake of Kiss of Death - which holds up a bit better these days than it did on first run, by the by - but it is, I think, a better film. (Or at least doesn't have Nic Cage going off the rails in it; Zahler, you get the feeling, insists on restraint and discipline from his cast, and gets great performances out of them. Especially Vaughn, though Don Johnson is pretty fun, too).

I have said almost nothing about the film, mind you, in writing this. That's by design. I am sure there are lots of reviewers out there who will describe it in detail, if that's what you want. You should just trust me (and S. Craig Zahler) and see it fresh, though. It's a good film to see that way. Like, when Vaughan goes inside the house at the start of the film, what's he going to do?

I think the suspense there is pretty important to maintain. To say nothin' of the rest of the film...

Awesome reversable cover on the Blu, too. 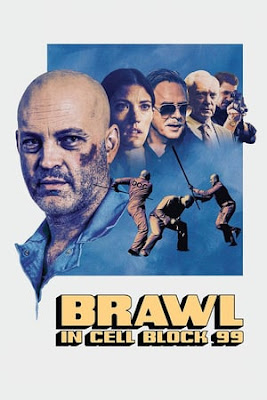 Posted by Allan MacInnis at 7:36 AM