I saw Slow again last night. Brought my wife, met Bev there, said hi to a few other people (Ron Reyes was in the house, in advance of his upcoming appearance with the band Thursday, but he didn't sing anything, and I didn't get a chance to say hi to him). Brought stuff for the band to sign but only got to chat with Terry and his wife, at the merch area - where I bought a shirt - though I got to briefly gush at Bruce Wilson of Tankhog and Sunday Morning, the evening's guest, who signed stuff by both those bands. Took a bunch of cell phone pics but Tom asked us all to not shoot and post video of the night, since there was bound to be some chaos and since - my words not his - he's trying to enforce a bit of quality control on the presentation of their as-yet-unrecorded, still-possibly-under-construction songs. I am fine with that (and I've removed some Youtube vids I had previously posted, at his request). "Asphalt Plane" last night seemed a bit darker and funkier than at the Fox. "Polaroid Queen" is awesome Stonesiness, reminding me of a glib comment someone - Dale? Phil? Grant? - made a Track Records years ago, that they didn't like the first Circle C album (the first Copyright album, that is) because it reminded them of those 80's Stones albums no one liked (but which, like Tattoo You, have long since acquired classic status, much like the Circle C album itself).

It was a great show, in any event. The space was small and packed, and indeed, the presentation was unruly, especially between songs; at one point Tom likened it to a Sonic Youth concert, "except we only use two tunings." But it sure was fun. It didn't go exactly as I expected: I thought there would be an opening set from Bruce, maybe even some Sunday Morning (or Tankhog!) stuff, but instead - after spinning all of the Stones' Some Girls off a turntable onstage, and a brief Aaron Chapman interview with Molly Malone, one of the Penthouse strippers - the instrumental portion of Slow kicked things off (at about 11pm) with a set of surf music (!); then - with Tom arriving - they played most of the Slow old and new catalogue - including a truly kickass "I Broke the Circle" and a couple songs that we had NOT heard at the Fox ("Hello," one appeared to be called). Only then, mid-set, was Bruce brought out, who did two songs: "He Ain't Heavy (He's my Brother)" and Iggy's "Kill City," with Tom doing a duet on the former and mostly stepping down for the latter. If Bruce came out later I missed it; my wife and I snuck out shortly after "Gimme Shelter," since my ailin' body was pretty uncomfortable by that point and I hadda go pee some blood downstairs. But it sure was fun. It struck me that Tom Anselmi is basically a 50 year old teenager. This, in turn, made me feel like a 50 year old teenager (though I've aged more like Hamm, who looks like a 50 year old Hamm).

It would blow to discover that Bruce got onstage for a final song or two with Tom, especially if one of those was "I Woke Up in Love This Morning," so please don't tell me if he did. What else? Them backup singers sure was cute (I didn't get their names, though I kinda thought "Betty and Veronica" would work). I am keen to see another show, though my body bein' what it is these days, I may not, especially since I'm back to work this week. (By the by, a little bird tells me that Doug Donut will be singing "In Flames" with them tomorrow, the greatest Death Sentence song ever; and I am guessing that Billy Hopeless will be doing "Ain't It Fun" with them on Thursday. My most likely night of attendance will be the Heather Haley/ Dennis Mills evening, which closes things off next Sunday. We'll see how it goes).

Anyhow, this is what I got pic-wise. Bev probably took a lot better ones but I ain't seen them yet. Lots of chances to see Slow still this week! (I wonder if I can make it to Vancouver on Thursday night after work? I dunno if I'll be up for it but whoo, Ron Reyes AND Billy Hopeless sharing the stage with Slow? Hmm). 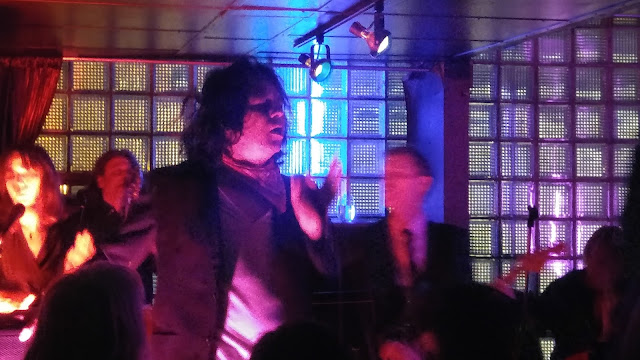 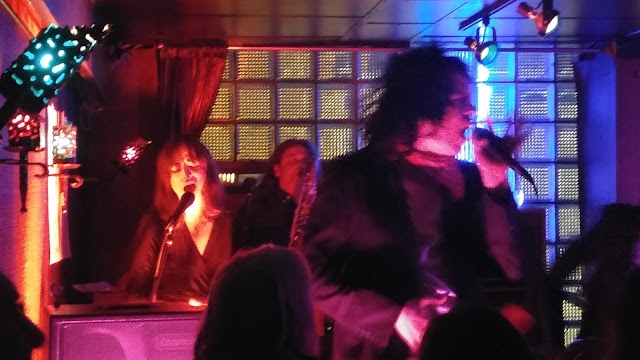 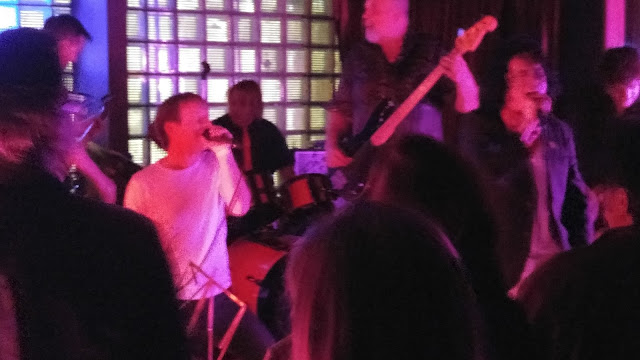 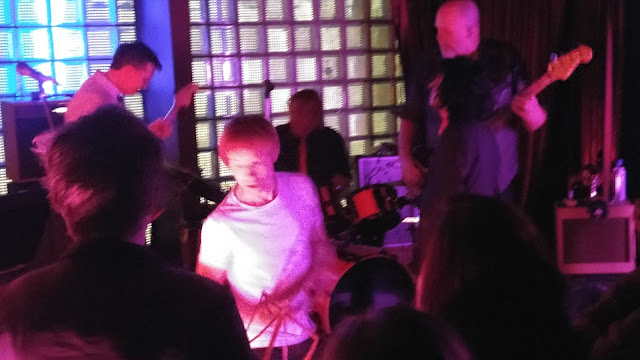 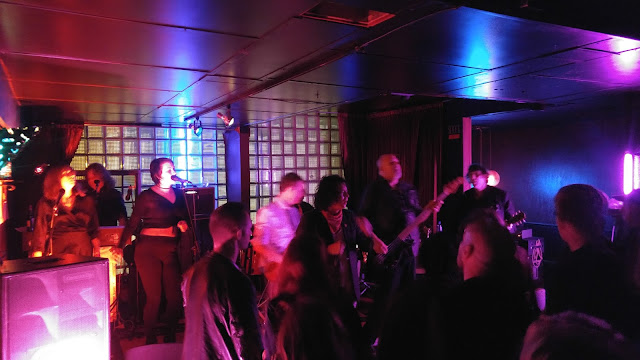 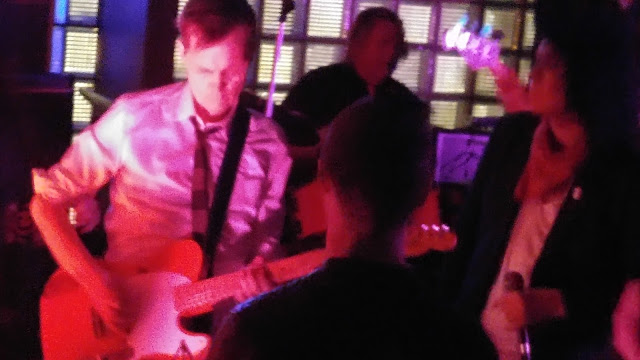 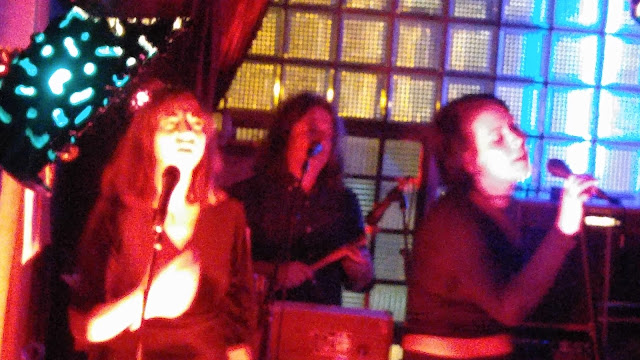 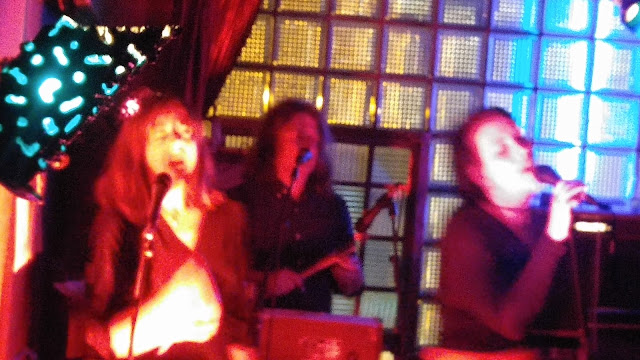 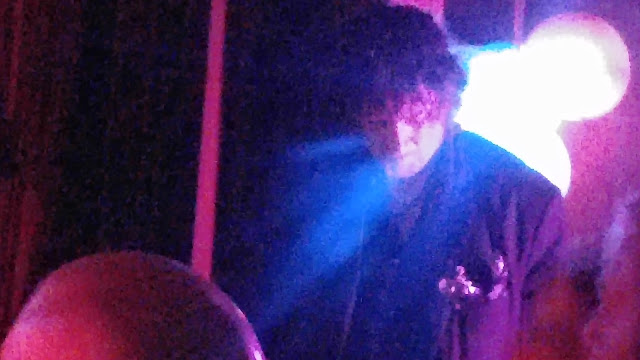 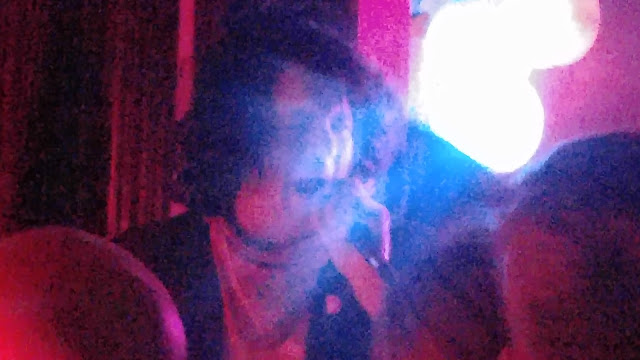 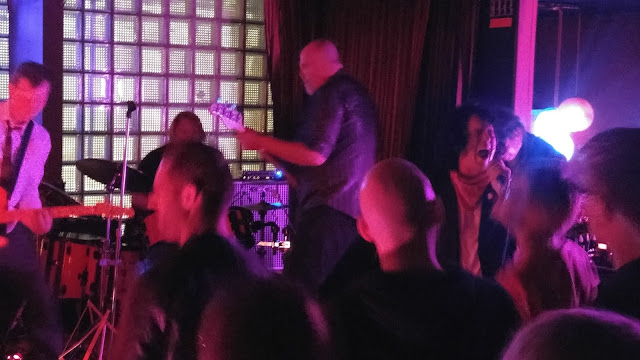