Things I will likely not see: Rodney DeCroo in Blackbird

My health issues are going to keep me from a few cool things this month. Having had my third procedure for kidney stones earlier today, I doubt very much that I will be well enough for the Pointed Sticks on the 23rd at the Byrd in Surrey (though I have a plug for it on the Straight website, comin' soon, talking with Nick Jones). I have done nothing so far on Bison's Earthbound 11th anniversary show March 28th at the Rickshaw, and may continue to do nothing, including missing the show, though it is very cool that Brad will be back on drums for the occasion. It's gonna be kinda interesting because I have long acclimatized myself to Matt Wood's very different style. Plus I assume this is the gig Dan And was telling me would see "Wendigo" back on their setlist! I am hoping that by March 30th I will have the mojo to go to a few gigs of Slow's momentous ten-night-stand at the Penthouse. (I also have something coming up with Tom on that topic on the Straight website, which has some real eye-opening backstory about the titles for "I Broke the Circle" and Against the Glass). But if today's lithotripsy works, I might start peeing chunks soon, so... how will that feel? Will I want to go out if I need to scream when I pee? 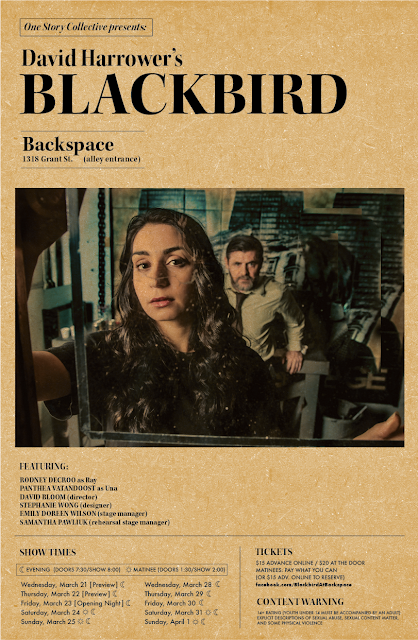 It is also unlikely I will see Rodney DeCroo in Blackbird, a play that takes in the topic of sexual abuse (a different production of it, with Jeff Daniels and Michelle Williams, is described here; the Straight has something on the Vancouver production of it here). It opens tonight, I gather, in a $10 preview version. It ain't nothin' against the play - I talked to Rodney about his most recent album, Old Tenement Man, here, count myself an admirer of his work, and would probably enjoy the play a whole lot. (I've even picked up and read a poem or two from his most recent book every time I pass through a Book Warehouse, but I haven't committed quite yet there). Theatre is something I almost never do, but a gritty local production of a well-received play, featuring someone I know and respect in a lead role... it sounds pretty cool. (I also have had, disturbingly, an almost identical shirt-and-tie combo to the one Rodney appears to be wearing, above). A description of the content, from the Blackbird press kit:

When Una was 12 and Ray was 40, they had a three-month long sexual relationship. Ray was sent to prison, served his sentence, changed his name and began a new life. Now, fifteen years later, Una has tracked him down to confront him in his workplace. But what does she want?

“… is Una, the young woman in the play, after revenge or closure, or does she want to restart it? Is Ray, who has been sent to prison and is (he claims) attempting to rebuild his life, a mendacious aggressor, or as much of a victim as she is?… …questions far outnumber the answers…” –The Guardian, 2017

David Harrower captures the bewildering and brutal realities that victims of sex abuse often face as they grow older. We follow Una on her confusing journey, as she navigates the conflict of her young infatuation with Ray, and her adult understanding of the trauma that came of his actions. Harrower masterfully orchestrates her emotional roller coaster and does not shy away from the tough questions, while providing no easy answers.

“I distrust statements,” Harrower says, “I want to undercut them, look under them.” –The Guardian 2017

Harrower writes Ray with surgical accuracy, as a fully fleshed out human being, with his own defenses and reasoning that he has created around his actions. This invites the audience to see Ray in a light different than just a base monster, and to empathize with him, a position that creates the same kind of confusion in the audience as it does in Una.

UNA: You were looking at me. At the barbecue
RAY: No.
UNA: I saw you
RAY: I wasn’t
UNA: I felt you
RAY: I looked at you. I wasn’t looking.

One Story’s production is directed by David Bloom, known for such hard-hitting works as Und (Felix Culpa), and The Monument (Felix Culpa/Rumble Productions). This show will introduce Vancouver theatre goers to Panthea Vatandoost, a Leo nominee for Sahar, as Una. Renowned singer/songwriter/poet and actor Rodney DeCroo plays Ray. Stephanie Wong, (The Aliens) is production designer and the stage management team is Samantha Pawliuk and Emily Doreen Wilson.

Sounds meaty and real. Now that I write this I'm wondering if maybe I can make it one night? At the very least I'll forward this link to a friend or two... least I can do...
Posted by Allan MacInnis at 6:37 PM