My 50th Birthday Movie event: Suburbia (the Penelope Spheeris one, that is)

So: for my 50th birthday party, I'm getting to curate a film: Penelope Spheeris' under-rated 1983 "punxploitation" follow up to The Decline of Western Civilization, Suburbia, screening March 12th at the Vancity Theatre. Here are eight good reasons to come see it! 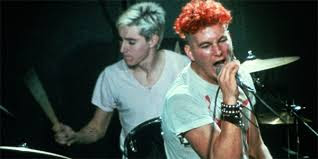 2. You like Flea! Yes, before he was famous, I think even before he was in the Red Hot Chili Peppers, Flea was a punk, who played in Fear (and I believe a few other California punk bands - I had heard he was in the Circle Jerks for awhile, and I believe he has a Black Flag tattoo, though I don't know if he was actually ever in Black Flag). He kind of steals the show here, as he tends to do, acting under the name "Mike B. the Flea" as a rat-loving street punk named Razzle, living with a group of other LA punk kids in an abandoned suburb. Ever wanted to see Flea put a live rat in his mouth? Here's your chance! (No rats are harmed). And who can forget the "Happy Easter, Asshole" scene? 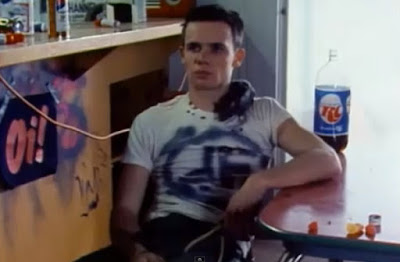 3. You like a good exploitation film! This film - not to be confused with the stilted 1990's Linklater/ Bogosion slacker comedy of the same name - was produced by none other than Roger Corman and is very similar in respects to a lot of Corman's classic AIP exploitation dramas and of the 60's and 70's, containing the same sort of unsubtle social commentary you get in classic blaxploitation cinema, the same feel for youth that you see in his drug films like The Trip or Psychout, at least some of the same sensationalism of vintage women in prison movies (even a bit of lesbianism!), and a straights-versus-outsiders plot that you get in biker movies. There are certainly documentary elements to the film - a cast of real punks, for one, real bands, real concerts, presumably real locations (like the housing complex where the kids are squatting, sort of foreshadowing the squats of Decline of Western Civilization III). It has the same unexpected authenticity that a lot of the Corman films have (I mean, they're always a bit cheesy, but for a B-movie huckster, his productions often do more justice to their subject matter than their "serious" A-list contemporaries). 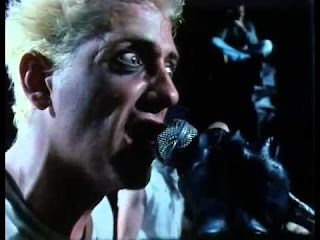 4. You like punk music! The Vandals - the original Vandals, with Stevo - kind of steal the show with "The Legend of Pat Brown," which appears to be about a cop killer (?! - "he's no zero/ he's a fuckin' hero!" But D.I. also performs "Richard  Hung Himself" - later covered by Slayer; and there are, if memory serves, two clips of vintage Jack Grisham TSOL. There's also punk all over the soundtrack, and a cast of real punks (including, I gather from comrades at the Straight, the female drummer from the Butthole Surfers, back in the day, trying to sell her pap smear); Penelope Spheeris said something at the time about how she was operating on the principle that you could train a punk to act but you couldn't train an actor to be a punk (though she tried with a subsequent film, Dudes, which I haven't seen in years and can't comment on; it's got John Cryer and the chubby murderer-dude from River's Edge, whose name, if I recall right, is Daniel Roebuck. All of this is long before Wayne's World).

5. You like Penelope Spheeris! ('nuff said, I hope, but certainly this film and the first and third Decline films are essential seeing for anyone who cares about punk cinema).

6. You like live music! We will have a guest, Jeff Andrew. I picked Jeff for this event because: a) his music works great in a solo acoustic context; b) for a folky kinda guy, he has pretty impressive punk credentials, having appeared on the final album by the Rebel Spell, co-writing a song with them; and because c) Todd Serious, the departed frontman of that band, was a big supporter of Jeff's, was the man, in fact, who turned me on to Jeff's music. Jeff is a very, very gifted songwriter in his own right, and songs like "Professional Asshole" - about cops abusing authority - to me have the classic feel of the very best (punk or folk or what-have-you) protest songwriting; I am sure Phil Ochs would have been impressed. Read Jeff on Todd Serious and the writing of "The Tsilhqot'in War" here...

7. And at the risk of opening old wounds, for fans of the Rebel Spell, I hope to play a couple of videos by the band as an added bonus, in tribute to Todd, who actually died ON MY BIRTHDAY, on March 7th, 2015 (March 12th might well be the anniversary of the day I found out about it - I was sitting at work at PGIC, in the computer lab downstairs, planning a lesson, when Adrian Mack called me to ask me if I'd heard. He was momentarily freaked out when I asked if it was rock climbing accident, like I was psychic or something, but it really wasn't a tough thing to guess; Todd had been injured previously in rock climbing accidents, which we'd talked about. Anyhow, the Rebel Spell remain one of my all-time favourite punk bands. I believe members of the band are going to come to the screening, and I might try to play some clips of both the Rebel Spell and maybe one or two bands from the Rebel Spell's diaspora... 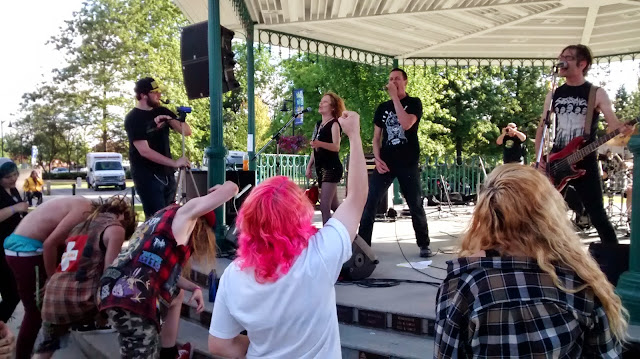 The Rebel Spell at Adstock in Maple Ridge, photo by me!

8. And hell, I dunno what else you need to come see this event, but hopefully a few of my friends (and Facebook friends) will be there. I usually give out a couple of prizes - not sure what those will be this year. There is a bar at the Vancity, just like the Rio. Real comfy seats; Jeff will be playing in the atrium, so it's really easy to grab a beer while you watch. And, you know, how often have you heard of Suburbia playing THEATRICALLY in Vancouver? (I don't know if it has EVER played theatrically here, actually, or anywhere in Canada; it's kind of an under-seen, under-discussed classic).

I will have an interview online SOMEWHERE (take a guess where) with Penelope Spheeris on this film, before it screens, but seriously, folks, if any of the above moves you, come see Suburbia at the Vancity Theatre on March 12th. I promise it will be entertaining. I mean - *I'm* going to be there, and I still bleed when I pee!

See you there! Happy birthday to me...! (I'd add "rest in peace" for Todd, but "peace" seems like a strangely inappropriate thing to wish on Todd, akin to "old age" or "mediocrity" or something. In any event, I miss you, man). 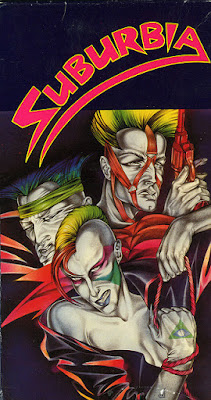 Happy birthday, little brother, and I wish you many more, with less stents.