I love outdoor ordeal films. Ideally I like them to have a deeper resonance, to have a subtext - as Carol J. Clover writes about so effectively in Men, Women and Chainsaws: Gender in the Modern Horror Film - that takes on archetypal resonances (she likens films like I Spit On Your Grave and Deliverance to Little Red Riding Hood) or implicitly figures class relations (she looks at Deliverance and the metaphor of rape: the middle classes are "raping the land" and the rape-minded hillbillies are getting even, forcing the well-to-do interlopers to come to terms with their privilege and either die guilty or defend it). In fact, the most interesting of these films can be read on many levels. There's an entire aspect of Deliverance, more obvious in the novel, where the "ordeal" to which the main character is subjected is a ritual of manhood-making - an engine teaching him to suppress his homosexuality. (It may not be politically correct to love a film that you believe is deeply, fundamentally homophobic, but, you know, I also think King Kong is fundamentally and problematically about interracial relationships - that there is a buried racism at its core, which Peter Jackson very effectively brings to the foreground in his remake, with all the Heart of Darkness references... but I'm not about to give up the film because it's politically problematic). The Canadian horror film Rituals - not to be confused with the excellent Netflix outdoor ordeal film The Ritual - also works as a sort of transformative ordeal on its main character, a conscientious doctor who, in being made to suffer (at the hands of someone deformed by less conscientious doctors), has to learn to fight for his life, overcoming his compassionate tendencies and killing in self-defence. In many ways these films - Hostel is another great example, though it substitutes economically depressed Eastern Europe for the American backwoods - are about learning from your persecuters, becoming like them, taking the violence that has been done to you and using it in an act of vicious (and justifable) self assertion (best figured at the end of the original The Hills Have Eyes). There's something usually very reactionary about these films, since, as Clover argues, they act to allow people with class privilege get to get over their guilt and blamelessly murder the poor (though you get occasion exemplars that are conscious of the class dynamic and play with or subvert it, as with Eden Lake). It's especially interesting to me that the locales of these films are increasingly outside America, where wealthy tourists are subjected to ordeals at the hands of pissed off locals. Take, say, Turistas, or Hostel, or - well, there are two superb early Greg McLean films, Wolf Creek and Rogue,  both of which partake quite gleefully in torturing visitors to Australia (Rogue actually seems to want to make amends for how nasty the earlier film is to its tourists, showing that McLean is quite conscious of what he's doing).

With all of that on my back - and counting myself a fan of Greg McLean's cinema, based largely on those two films and the best Battle Royale movie since Battle Royale, The Belko Experiment - the moment I saw the box art for Jungle, and saw that McLean was directing it, I knew I had to see it. 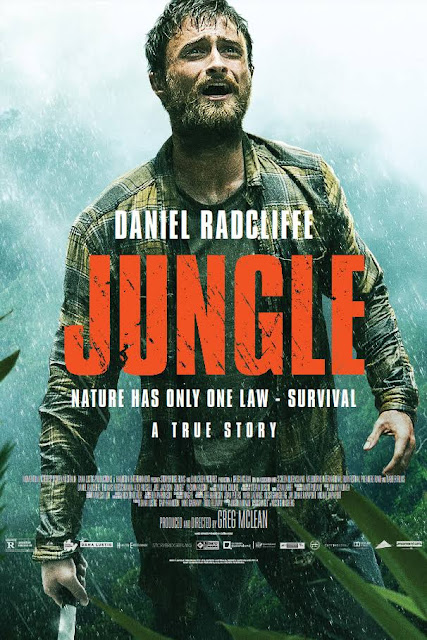 And if you're now thrumming with resonance, having read the above, having seen that image, and  feeling a genre-lovers craving for a good outdoor ordeal film, you pretty much have to see it too, ideally without knowing anything more about it, except that I assure you, it's really good. If you liked Wolf Creek and Rogue, you'll be right at home with this movie. You can stop now, and go find the film ($12.99 at Sunrise Records as of this writing). But fair warning: I've totally misled you as to the content of the film with that first paragraph. It very adequately explains why I was excited to see Jungle, based on what I had on my back when I saw the box and who directed it - but it has nothing much to do with the film itself, it turns out.

Some mild spoilers follow. You see, Jungle is a pretty faithful "based on a true story" kind of story. It's not the kind of "based on a true story" story that takes some real event as the pretext for confabulating a lot of crap; it's the kind of "based on a true story" story where the person it happened to, and who wrote a memoir about the experience - Yossi Ghinsberg - is present on the set as an advisor, and pops up in the making-of featurette included on the disc. It IS still an outdoor ordeal film, and it does have features that some of the above-mentioned films have (like men on a raft going down a river, which resonates against both Deliverance and Rituals). And it has some good little gross out moments (monkey meat, anyone?). But being an actual true story about someone fighting for survival in the forests of Bolivia, it doesn't quite have the horror or fairy-tale/ archetypal dimensions that the other films I'm mentioning have. It has more in common, in fact, with Werner Herzog's Rescue Dawn - another based-on-a-true story film where a known actor (there it's Christian Bale, here it's Daniel Radcliffe) has to lose a bunch of weight, get attacked by parasites (leeches in the Herzog, worms that live in wounds in the McLean) and struggle against the elements - green things, rain, cliffs, and so forth. While I did enjoy Rescue Dawn, I must say: I enjoyed McLean's movie far more, maybe because it doesn't come at you with all the "arthouse machismo" baggage of having been made by Werner Herzog (who I like, but who can be a bit much at times, y'know?). While a humbler film, it is certainly no less interesting to look at than Rescue Dawn. That's pretty high praise, really. because Rescue Dawn does look great...

Oh, and there's a good quicksand scene, too - when was the last time you saw a good quicksand scene in a movie? And there's stuff with ants that should really make Eli Roth wince with embarrassment, at how bad his CGI ants look in The Green Inferno. While - with the possible exception of the monkey meat scene - Roth trumps him for gore hands-down and guts-out, McLean easily out-ants him: he actually puts REAL ANTS on Daniel Radcliffe, and gives us what sure look like real close ups of ants biting human skin. (He explains a bit about how he does this - holding up a jar of Australian ants, standing in for fire ants - in said featurette, but he doesn't say what the ants are actually biting). Harry Potter haters might have fun seeing ants poured on Daniel Radcliffe, though. Hell, Daniel Radcliffe fans might enjoy it, too.

I actually like Daniel Radcliffe - he's made consistently interesting career choices as an actor. Have he and Elijah Wood co-starred in anything? They've seemed on similar trajectories.

While I am mildly disappointed that there is no deep subtext to Jungle, that there's not much to dissect in terms of class politics or the form the ordeal takes or so forth, and that in fact it ends up being more of a real-life adventure story than a horror movie, I thoroughly enjoyed it. Knowing nothing about it at the outset, except that I wanted to see it, I had to shed by baggage gradually ("I don't think there are going to be any cannibals... nuts"). But by the end, I was glad to have seen it, and am happy to recommend it to anyone who counts himself a Greg McLean (or outdoor ordeal movie) fan.

A real jaguar would have been nice, actually. I guess that's my one criticism of the film. But the featurette is pretty fun on that note, come to think of it, when you see that they had actually used, before the CGI, a fucking stuffed tiger as a stand in.

Anyone seen Wolf Creek 2, yet? I missed it... I think I need to. Keep going, Greg McLean! We old auteurist types need genre filmmakers to follow!
Posted by Allan MacInnis at 12:19 AM