NOTE: This article got briefly taken down so the real Pere Ubu feature could be at the top of my blog. This is actually a post from BEFORE I wrote that feature. The Oh Sees gig was last week. Anyhow, I'm putting it back up.

"Once and for all, there is a great deal I do not want to know" - Friedrich Nietzsche 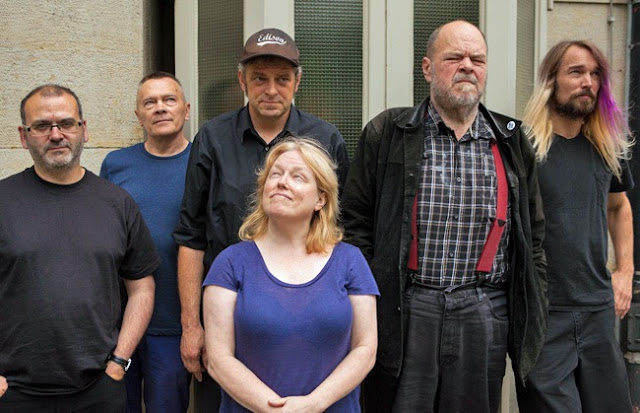 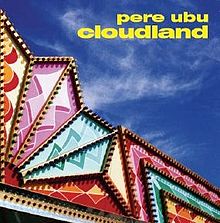 Since there isn't much \intelligent discourse around rock music, things that people say about it that are significant and strikingly true tend to stay with you.

For instance, there is a song called "Ice Cream Truck" that appeared on Pere Ubu's 1989 album Cloudland that I constantly return to in my head, even though I haven't owned that particular album, or heard that particular song, since around the year of its release. Ubu leader David Thomas is a very smart man whose statements (like his observation that properly understood, punk and metal are actually forms of folk music; or his issues with public arts funding when it comes to the making of music; or his opinion that rock and roll is a brotherhood and that women who wish to participate must become honorary men - I'm paraphrasing on all three counts, here) may seem provocative and disagreeable, or else simply and obviously true, depending on your own point of view (for the record, I go along with him on the first but am at best uncertain on the latter two). Without even troubling with the song itself - playful and accessible, from a period where Ubu were beginning to experiment with a more commercial and straightforward sound - there's an element of striking, significant truth to the lyrics that has kept "Ice Cream Truck" with me for something like 27 years.

There's too much music in the land.
You hear it everywhere.
Everybody's in a band - can't get enough of it.
Brother Jimmy,
Cousin Ray,
Mom and Dad on bass and drums -
someone here's just gotta quit.

It's not the sugar.
It's not the sticky sludge.
People wanna eat that stuff I don't hold a grudge.
It's that music - there's too much of it.
I wish someone had the guts to quit.

There's too much music in the land.
You hear it everywhere.
Everybody's in a band - they can't get enough of it.
Brother Jimmy,
Cousin Ray,
Mom and Dad on bass and drums -
they just can't help it.

There are a few reasons why that's a memorable lyric. First off - though I didn't realize it back in 1989 - that's an agreeably clever riff on Blind Gary Davis' "Cocaine Blues" in the chorus ("Hey baby won't you please come quick/This old cocaine's makin' me sick.") It sort of indirectly illustrates Thomas' point that folk music - I'm expanding a little here - is the basis of popular music, including, at least in this case, Pere Ubu itself. Of course, this assumes you go with me that the blues is in fact a form of folk music, but certainly if you go back far enough, it's nearly impossible to tell the difference. It also cleverly likens music to a drug, which I don't think most music addicts would argue with much.

But the main reason the lyric stays with me, of course, is in fact the point of the song: that there is "too much music" in the land. As I remember it - sitting in my bedroom at my Mom and Dad's apartment, lyric sheet on my lap, pondering the words - I didn't really feel that way in 1989, thought Thomas was just being provocative (and maybe a bit hypocritical, being in a band himself). Too much music? Of course, at that time, my record collection wasn't a fifth of the size of my current collection, and I didn't have an entire universe of popular music accessible via the internet. Too much music? Hell, how can that even begin to be true?

I sure feel that way now, though. It may be that it's a function of age: once you're in your late 30's - as Thomas was in 1989 - as your awareness of what's happening in the world expands and the boundaries you built in your teens and twenties - when I was much more judgmental about what music was cool - start coming down, you start to get overwhelmed by just how MUCH music there is out there. Maybe you even start trying to shut things out - start adopting a self-protective posture to keep you from being overwhelmed. Certainly for the last few years I have been on that page: fellow music geeks (bev davies and David Ames, I'm looking at you in particular) suggest bands to me and I go no, no, I don't want to know, I can't keep up with my own interests, let alone take on new ones. Part of it might be that I'm a music critic deluged with requests for attention. Part of it might be that given my budget and the size of my apartment, I really can't fit many more records or LPs into my life. Hell, since I got rid of my storage locker, I had to sell off a quarter of my music just so the remaining 3/4's can fit into the apartment. I haven't the space, room, time, or need for new music, especially with all these remastered vinyl reissues popping up (see my Tad Doyle piece, a few posts ago).

But another thing might now be true: maybe there simply is too much music out there at present for anyone to keep abreast of? (A "glut," as my friend David M. calls it). These things are hard to quantify - and I certainly can't speak to 1989 - but apparently, as of 2009, at its peak, there were five million bands on Myspace. Which is only a thin sliver of the amount of popular music out there, because you also have to take into account not only bands that existed off the Myspace grid, but bands that formed since Myspace became a negligible force. AND - here's where it really starts to weigh you down - you also have to take into account all the music recorded before the internet even existed, that never HAD a Myspace presence; this includes stuff that has never been digitally released in any format, but which exists in the form of LPs, tapes, or wax cylinders, but is particularly relevant in the case of digitized music, because thanks to digital technology, all popular music that does exist in a digital form is present or potentially present at all times, available via your computer, competing with current bands for your listening attention.

Which brings us to Thee Oh Sees, playing the Rickshaw this Saturday (not sure if there are tickets left for this gig, but I recommend acting fast, since at least some places say it is sold out). This time, I blame bev davies for my interest - since she wrote me about going, and I felt compelled to at least check them out, which - given the ears-in-fingers posture described above, I hadn't, as yet. And as I usually feel these days when I discover a band that merits my attention, my reaction was, I must confess, something like, "ah, damn it to hell. They're good." 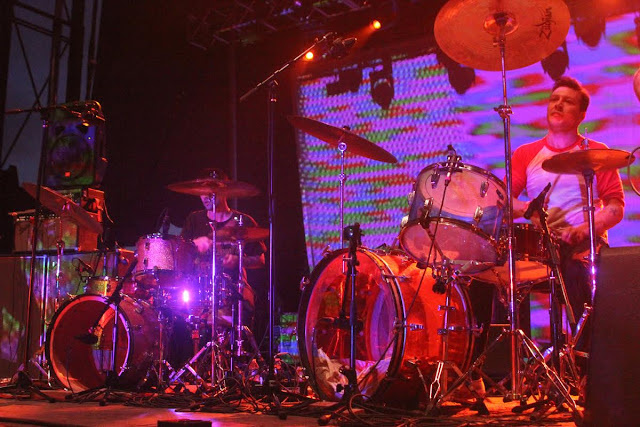 Thee Oh Sees by bev davies, May 8 2015, Austin: not to be reused without permission

I don't begin to have anything intelligent to say about Thee Oh Sees, however. Like Guided by Voices, they appear to be extremely prolific (also cause for cursing). Their most recent album, An Odd Entrances (linked under the word "good," above) is one of two they released in 2016, offering a sort of trippy psych-garage with an element of the Pixies. I'm playing it now, and it is wholly agreeable - but so were the Black Lips, Spider Bags, and Titus Andronicus, other current bands that I've experimented with taking on in the last couple years, since I reached my threshold for new stuff. But I can see why Bev likes them so much. Indeed, so does Mo Tarmohamed of the Rickshaw, who tells me they "were one of the top 10 bands on my wish list to book" - a wish which he's been lucky enough to fulfill twice, now.

So while I'm not even going to try to do Thee Oh Sees justice, I think I'm going to check out the show tomorrow. It takes a pretty remarkable band to get past my "I don't want to know about it" barricades these days, but I can't resist, when I hear a band that just might manage the trick; I gotta at least give them a chance.

On the topic, meanwhile, of Pere Ubu, they're another band on Mo's wishlist, though they're going to be playing the Cobalt on their next trip to Vancouver, not the Rickshaw, on Dec. 2nd. They're presently on the Coed Jail! tour, playing only material from their earliest years (1975 to 1982). It's a smart, crowd-pleasing gesture, because that is some classic stuff - presumably including their take on the original version, by proto-Ubu band Rocket From the Tombs, of "Sonic Reducer," as well as classics like "Final Solution," "Heart of Darkness," "Non-Alignment Pact," and "Street Waves." Mo writes that he remembers "being mesmerized by Dave Thomas stage presence / antics at the Commodore when I saw Pere Ubu open for the Pixies in 1991." We're assuming he'll be in the audience at the Cobalt on the 2nd, licking his wounds that the gig isn't happening down the street and around the corner.

That is really all I have to say - Thee Oh Sees sound really good, but I don't know if I have room for them in my life, because of - see "Ice Cream Truck." But while I have your attention, here are a couple of other photos, of Thee Oh Sees audience at that Austin gig, also by bev davies. The first one is one of my favourites of her photos that I've seen lately, capturing the almost entire spectrum of possible audience reactions to a live concert in one photo: 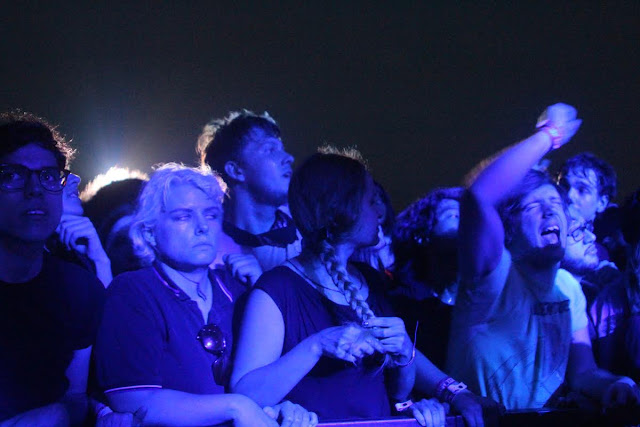 The only thing missing from the above is a stage dive, so she also includes this: 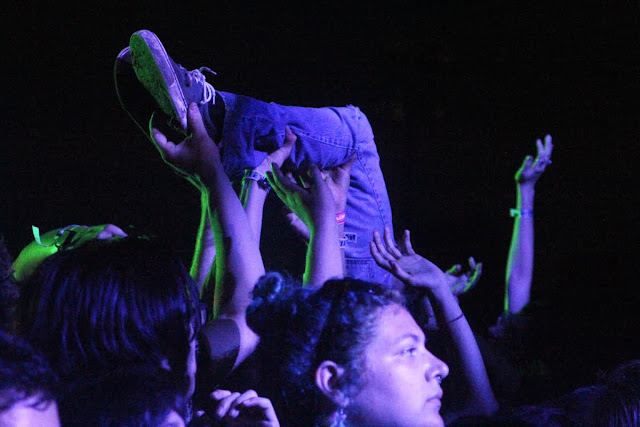 Thee Oh Sees audience, Austin Texas, by bev davies, not to be reused without permission

But finally, when it comes to the Rickshaw, Mo asked me to give a plug to Midge Ure - best known as a member of Ultravox, but also Thin Lizzy (!) and others - who plays the Rickshaw January 5th. and finally, plugwise, he also thought it worth mentioning that Kyle Morton of Typhoon is coming on January 9th. Morton is apparently a Lyme disease sufferer, touring his solo album What Will Destroy You. He says of that album in the press release:

"Most of these songs were written in about a day, many of them while walking aimlessly around Portland, others wrote themselves in the moments just before sleep. They were recorded and mixed with the invaluable help of Paul Laxer from the inviolate comfort of his living room, mostly in the evenings during the winter and early spring of 2015. At the outset there was no deliberate attempt at an overarching concept, though once finished and lined up together the theme of my subconscious was revealed to me: this was a record about love, more specifically (not devolving into platitudes just yet), the ambivalence of erotic love."

Needless to say, that's all wayyyy too much for me to take in, but Thee Oh Sees - maybe. And Pere Ubu? Definitely.

Upcoming: a Pere Ubu interview.
Posted by Allan MacInnis at 10:59 AM