At Lanalou's tonight: A Series of Dogs - a mini-interview with John Armstrong 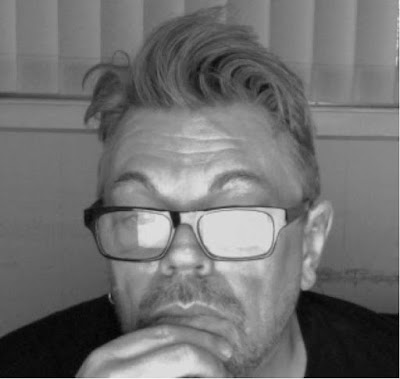 The Modernetttes' John Armstrong has three books out there now: Guilty of Everything, his Vancouver punk rock memoir; Wages, about his time spent as a journalist; and now, A Series of Dogs, which is based on a great idea: it's a canine-centric memoir, about the dogs in Armstrong's life. I have not read it yet, but I fired some last minute questions to Armstrong, and he shot me some quick answers while commuting to Vancouver for the booklaunch, tonight, at Lanalou's, featuring The Judys. Our Q&A is below.

Allan: Am I confused? I thought from following you on Facebook that you were working on a dystopian science fiction novel. I wasn't expecting your next book to be about dogs.

John: Not confused; that book called Schadenfreude, Inc. is finished and waiting for a blurb from a certain Big Time SF author who lives in Van. But he's trying to get his own book finished on deadline so ... waiting. That novel is one of four I have coming out in the next year - the last five years' work. We can talk about them some other time as it would eat up space and I'm typing this on a bus.

[John pauses to ask me to please fix typos - if he attempts to address them, as he jostles along he makes "three new ones." Virtual keyboards suck, indeed, but note that some of what follows was so typo-rich that I MIGHT have introduced errors of my own here!]

Can you share an anecdote from the book? Does it overlap with the time frame from your previous books, or is it in sequence with them, like "part three" of your memoirs...?

It runs from my youth on a dairy farm on the Island to today. I think nine dogs in all. I'm in it as much as they are - we were friends, good friends, and its about our relationships, and concurrent human ones. So yeah, it covers the same years and beyond, through to my current years - going on ten - on a mountain at tthe ass end of the Fraser Valley, at the foot of the Cascades. My Rotweiller Bobo made the move planning with me from the Downtown Eastside to the country - I mean, hillbilly country - and we both went through some serious READJUSTMENT. The first time he saw a 'coon he looked at me as if to say, "What the fuck is up with that cat?" He had no clue how to be a 'dog' - wouldn't eat salmon down at the river even though my new wife's dogs caught one and dropped it at his feet. Bobo did not trust food that didn't come from either a can, a bag, or my plate.

Any intention of doing anything musical tonight? (Any background with the Judys?).

I'm not planning on it but two or three beers ... I've known Dennis Mills for 40 years - Rhythm Mission, AKA, Jazzmanian Devils... one of my favorite people and on a very short list of same.

The last time I saw you make music was at Ron Reyes' birthday bash, a few years ago at the Rickshaw. It was pretty great, actually - I enjoyed it more than I expected - but I didn't recognize the songs. Did any of that get released or recorded? Will it? 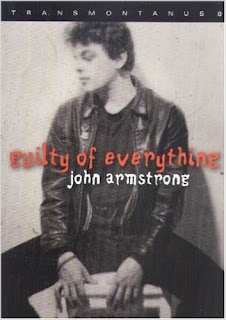 We recorded ten or eleven new songs with the current band - they still need final mixes and mastering, but $$$ is in the way.

Curious - since you live kinda near Gerry Hannah, one of the funniest stories in Guilty of Everything is where you catch him blowdrying his shoulder tufts in a bathroom before a show. How did he take that? You guys good neighbours? Ever run into each other?

Gerry is a sweet guy and held no grudge - it's never come up, anyway. We usually only talk politics. He's amused that I'm more radical in my dotage than when I was a punk rock agent provocateur.

Whatever happened with The Rebel Kind, the film adaptation of Guilty of Everything? (The film was set to be directed by Canadian filmmaker Reg Harkema, with Jay Baruchel as a young John Armstrong).

The Rebel Kind is on life support and not expected to recover. The star publicly announced he was all in, then made a bunch of Hollywood movies and by the time he was available again he had broken up with his girlfriend, who was set to play Mary. But who knows, weirder shit happens in Hollywood every day? 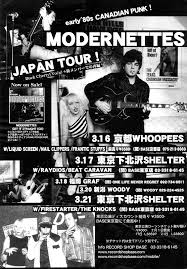 Any stories from the Modernettes tour of Japan?

Japan was one of the great experiences of my life. We were the Beatles for ten days. People wouldn't let us carry our own bags or gear, hung out with us like little kids, eyes shining. "Please use my amplifier, Mr. Buck-san!"

What else is up? Musical plans? Writing? Anything you want to tell people about?

I'm going to start writing and recording soon. I have an album's worth of songs, all about show business in some fashion, a song cycle if you will. Hoping to get Gay Nineties to be the band, with Paul Leahy on guitar when he's feeling better. But we're not likely to play live around here - not really fun or lucrative, and I insist on one or the other. Don't much care which it is but one of them is required! I'm thinking of doing Europe in the summer, twenty or twenty-five shows.

Lastly, what am I doing now? I write 1000 words a day, five of seven days on average. The goal is ten books in ten years and I'm halfway there. Only one nonfiction left in me, about aging, called The Back Nine: grimly, bleakly amusing.

Otherwise it's work forty hours a week, play basketball at the Y, hang with wife and kids, don't hardly drink, gave up bad drugs yonks ago... got to stay alive and healthy so that when the world finally appreciates me, I'll be in shape to enjoy it. But mostly I write, and when I'm not writing I'm thinking about it. I'm told this fairly common. if i miss a day at the keyboard, I feel out of sorts. I'm finally addicted to something that won't kill me, 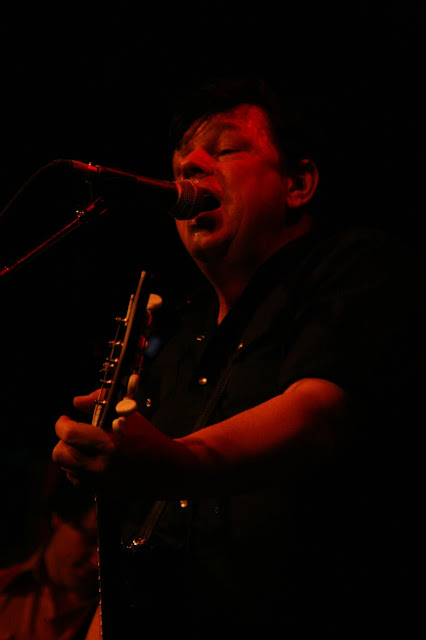 John Armstrong at Richards on Richards, 2007 (?), by Cindy Metherel, not to be reused without permission

John Armstrong will be reading from his book A Series of Dogs tonight at Lanalou's. Event begins at 8pm. Admission is free!
Posted by Allan MacInnis at 9:06 AM

That was really fun - some of the stories in John's new book are really moving, others really funny, and he managed to read them without getting too emotional. Got me a book! The Judy's were very enjoyable, too (I didn't realize one of their background singers was Cass King!).