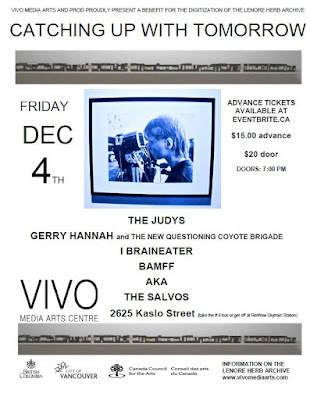 Well, there's a gig to consider: Dec 4 at VIVO's new location, the Judys, Gerry Hannah's band (the New Questioning Coyote Brigade, Gerry? Really?), I, Braineater, AKA, BAMFF, and the Salvos, are going to play as part of a drive to digitize the work of Lenore Herb. Apparently the new VIVO is near Renfrew Skytrain, 2625 Kaslo Street.


I only talked to Lenore Herb once, and she and Bill Scherk were kind of in contention about how a Young Canadians event that both were involved in was going to go. I got frustrated at having two people telling me different things (get it straight before you talk to the press, folks!) so I didn't really maybe do it justice; she must have been terminally ill at the time, but said nothing of it... no idea where the tape for that interview is now, except it's probably in deep storage!
Posted by Allan MacInnis at 8:58 AM