Hey, The Gambler is pretty good!

I genuinely didn't expect to be impressed by the remake of The Gambler. Even seeing that original screenwriter James Toback's name was listed as an executive producer, I just didn't figure that it could possibly be any good. Among other things, Mark Whalberg > James Caan, by a long shot, y'know? I have no real fondness for the guy, though I grant that he's not without talent. Plus, holy cow, the original version of The Gambler is one of the grimmest, darkest portaits of self-destructive human psychology ever committed to film; it could only have arisen in American cinema in the context of the gritty 1970's. I mean, no film made now would be brave enough to end with an image of the hero, having succeeded in getting himself slashed across the face with a razor, proudly, narcissistically examining the wound in a mirror, like he's accomplished something. And without that sort of courage, to make your protagonist into something so repellent, so grotesque, why even bother to remake the film at all? 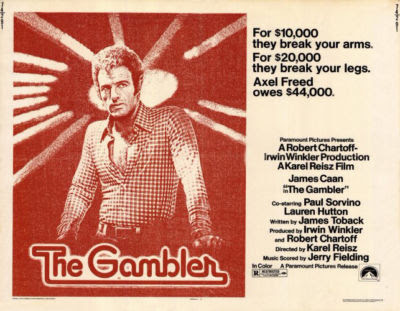 Spoiler: The remake of The Gambler does not, in fact, end by revisiting the above image (though I'l accept their ending as coming from a place of good faith: in context, it seems less like a matter of pussying out than of wanting to leave room for a smidgen of hope). Nor does the remake duplicate a single line of dialogue from the original film - not even obvious winners like the recently- quoted-on-this-blog "once you ain't a virgin, you're a whore." In fact, it seems to want to have fun with admirers of the previous film, by coming close at various points to set ups from that film, then tweaking them, changing them slightly. Like, the gambler of the title - Wahlberg - is still a literature professor, but instead of quoting Dostoevsky, he talks about Shakespeare; his problem is the same, but the moral/ literary framework for interpreting it is slightly, significantly different. And then there are moments of inspired cinematic choices unto themselves, with no precedent in the previous film, like showing us images of people gambling a casino set to Alan Price's "Poor People," from the soundtrack to "O Lucky Man." That's some great repurposing. I have no way of knowing whether people who do not admire the previous film will like this movie - it's 46% rating on Rotten Tomatoes suggests not - but my curiosity was very pleasantly gratified... especially since I bought it on the cheap (you can find it on th 2/ $15 racks at London Drugs, and by the way, you don't actually need to buy two Blu-Rays to get the deal). I'm not saying it's a great movie, but it's wayyy better than I imagined it could be, and I think diehard fans of the original - or people who follow the cinema of James Toback - will appreciate it. 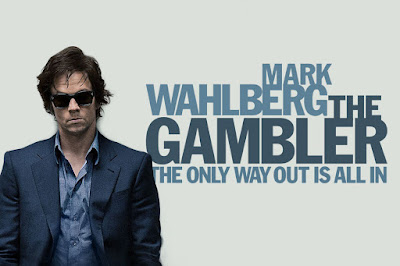 Oh, and John Goodman has fun with the Paul Sorvino role, Jessica Lange is as good as ever (and finally is starting to lose her looks, thank God: I was beginning to think she was a Stepford Wife or something). And, whattaya know, George Kennedy is in it! I figured he had died years ago. Good film! It's not the equal to the original, but it's not 1974, you know? And given that, it's way better than I'd ever imagined.
Posted by Allan MacInnis at 8:05 PM