Neglected gems new on Blu-Ray: Report to the Commissioner

It baffles me, having caught up with Report to the Commissioner last night, seeing it for the first time in 30 years, that the film (to my knowledge) never saw release on DVD in North America. There are so many things going for it that I can't begin to praise it enough. The stuff I remembered finding a little too overt when I saw it as a kid played just fine; the stuff I remembered being incredibly intense was exactly that; and the things I had forgotten... oh, the things I had forgotten... 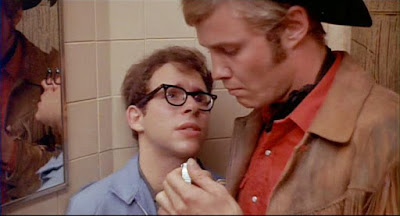 First off, does anyone remember how excited I got on Facebook, in a post I made a couple of years ago, that it was none other than Bob Balaban who blows Joe Buck (Jon Voight) in the movie theatre in Midnight Cowboy? I consider myself a bit of a Balaban buff - he's one of those character actors who often ends up being my favourite part of the films he appears in. I mean, Charles Haid gives him a run for his money in Altered States, but it's such a terrific role that it's up there in my top ten character parts in cinema history. The smug, chilly, self-important movie critic he plays in The Lady in the Water is priceless. Balaban is sanctimonious and kind of evil in Prince of the City, but definitely memorable (though you can't compete with Treat Williams in that film). As a partner, too, Francois Truffaut is hard to outshine in Close Encounters, but Balaban is still a welcome presence. And of course I love his first feature film as director, the twisted Freudian meat-fear comedy Parents, starring Randy Quaid and Mary Beth Hurt - a must see for those who like their humour dark. There's been more than one time that I've had someone propose a movie to me that I wouldn't normally leap to see where I've gone along just for the presence of Bob Balaban (sure, I'll watch Moonrise Kingdom, why not? Bob Balaban is in it! Though I kind of drew a line for The Monuments Men). He's not the only such actor out there, but if I were to formulate my own version of the M. Emmett Walsh/ Harry Dean Stanton rule that Roger Ebert proposed - that no movie can be entirely bad if it has either of those men in it - I think it might be "Balaban/ Shawn" rule (because you know, I really like Wallace Shawn as an actor, too). 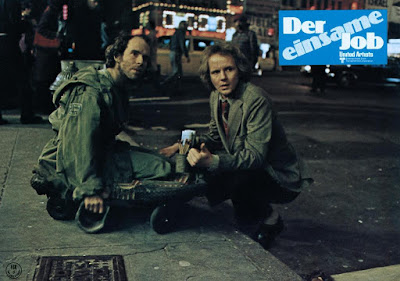 Anyhow, considering my fandom here, imagine my surprise to discover that it took me several minutes of seeing Balaban onscreen in Report to the Commissioner before I realized that he plays the greasy little homeless man whose legs don't work, who bursts out in rage at passersby on the New York streets, bites jaded cop Yaphet Kotto in the leg, and occasionally drives his push-cart out into traffic. My girlfriend and Mom, for whom I was playing the movie, were treated to my practically leaping up and saying, well into the movie, when Balaban appears for a second time, "HOLY SHIT, THAT'S BOB BALABAN!" They glanced at me, as I pointed, grinning and clapping, then glanced at each other, and we got on with the film, but I was stunned. Not only is it a very early, very significant role, it's remarkably out of character for a guy who usually plays fairly buttoned-down, fussy types. He gets an AMAZING scene, too, which I'm tempted not to spoil, since it's so exciting. The film - a gritty 70's police thriller - has a couple of great chase scenes - including a foot chase worthy of Peter Hyams, involving a black drug dealer in his underwear, being pursued through the streets of New York by an idealistic young cop (these great lobby cards I found through Yahoo international image searches have a German title for the film, which translates roughly as "the lone job" or maybe "the lonely job"): 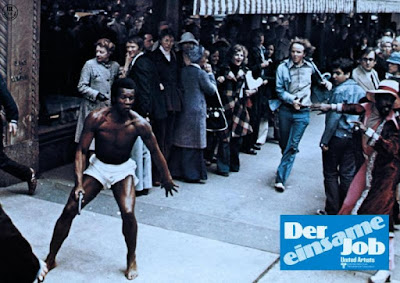 As stunning as that scene is, the earlier moment where Balaban helps track down the drug dealer in question for Michael Moriarty is even more harrowing. I don't think I will describe it in detail - it's a very novel chase scene, but neither a foot nor car chase, exactly - but the thing that's really special about it - besides some great photography - is how much emotion goes unstated. Balaban's character is done a great cruelty by Yaphet Kotto early in the film, which is then undone by Kotto's partner, Moriarty, leaving Balaban in Moriarty's debt. When he gets a chance to pay him back, he does so with self-endangering devotion and fervour, none of which requires overt explication in the film (a lesser movie, of the kind we have now, would feel the need to put dialogue into the film to explain what's going on - "I'd do anything for him, he really saved me that one time" - but this film never once insults its audience's intelligence). It's one of those character roles - sort of like a few of Brad Dourif in The Eyes of Laura Mars - that is so good it threatens to upstage all the other action of the film. 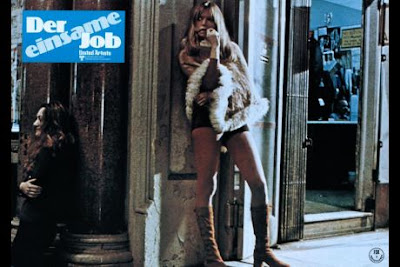 It doesn't, though - it's merely one of many "holy shit" moments on hand.  (And rest assured, Report to the Commissioner is a damn sight better than The Eyes of Laura Mars is!). The main story of the movie goes like this: a young female undercover cop (Susan Blakely, who bears some striking resemblance to Katherine Isabelle, especially when she smiles) has been shot dead by a fellow cop (Moriarty). There is the possibility of an enormous scandal in the police department if the real story of how he ended up killing her gets out, but certain higher ups want to know the unvarnished truth, before they decide whether to cover it up or not. The investigation into what really did happen forms the meat of the story, and we get testimony from various involved parties that works us up to the present day. Along the way, there are great small turns from Hector Elizondo, Richard Gere (in his first film role!), and William Devane, among others. The film is more or less a blaxploitation movie, in the most earnest, politically-charged sense of the word, even though most of the characters are white; the grit and grimness and  70's urban despair are all akin to, I don't know, Across 110th Street or something (to say nothing of the funky soundtrack), and there's a real despair to the story of a naive idealist caught up in a cynical, hardened, self-serving system. As for the final set piece where Moriarty and the drug dealer are trapped in an elevator together, pointing guns at each other... I remembered it as an amazingly powerful scene from when I saw it on VHS in the early 1980's, and it's every bit as strong as it was to me then.

And can we say just a few words in favour of Michael Moriarty? Another great character actor from American cinema, who now lives in Maple Ridge, as far as I know - he did for years, anyhow. He has apparently been clean and sober for some time, but the only time I got to speak to him there, it was apparently during the period when he was not; he was hanging out at a coffee shop after what, from his somewhat haggard state, I inferred might have been a bit of a rough night (we gather he's had a couple of those - there was a story about him getting beaten up in the bar of the Haney Hotel that pretty much every film buff in Maple Ridge has heard). I had to briefly disturb him that one time to praise his performance as John Converse in Who'll Stop the Rain - the decisive interpretation of that character, as far as I'm concerned; there are all sorts of things I don't care for about that film, an adaptation of my favourite American novel, Robert Stone's Dog Soldiers, but by god it is PERFECTLY cast, also with great work from Nick Nolte, Tuesday Weld, Anthony Zerbe, Ray Sharkey, and especially (besides Moriarty) an utterly terrifying Richard Masur, doing his career-best in the role of Jules Danskin. Anyhow, Moriarty segued, that day, into talking about how he admired Robert Stone, and how he'd written a few novels, too. I'm afraid I kind of cut him short at that point and went to get my coffee, because, you know, sorry, but I don't really need to read Michael Moriarty's novels, any more than I want to watch Alice Cooper golf - just because I admire the guy in one realm doesn't mean I need to commit fully to his work! (Plus he's some sort of Christian conservative now, and that could just get weird). But all that aside, if I ever see him again, I think I'm going to try to get him to sign my Report to the Commissioner, and tell him how much I love his work in that film, too, because damn is he good in this movie. Damn is he good. I mean, he even outshines Bob Balaban (and Yaphet Kotto, too!). That isn't an easy thing to do. 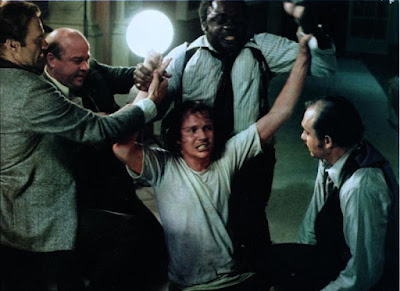 Kino Lorber did a fine job finally getting this film out on Blu. It has a graininess to it, but it's perfectly appropriate; I'm not really a huge fusspot over image quality, but thought it looked fantastic (Glenn Erickson was impressed, too). Thanks so much for having brought this film back from oblivion; shame there are no extras, but I don't have time for them these days, anyhow. Now maybe we could see When You Comin' Back, Red Ryder, by the same director, Milton Katselas? It also sounds really interesting... 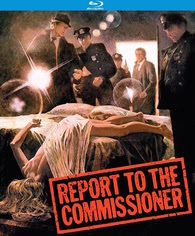 Now maybe I can use my girlfriend's enjoyment of this movie as a pretext for playing her Q? (Oh, and do note, David M., that I have just ordered Bang the Drum Slowly on DVD, on your recommendation. Yes, David M., you get the last sentence of this blog entry).
Posted by Allan MacInnis at 8:32 PM

While you're at it, you want to see the first four seasons of "Law And Order". Michael Moriarty is great in every single episode. He does a quivering outraged courtroom scene like no one else. And the "James Dean" bio where he plays James Dean's dad is more illuminating about the real life character than any James Dean biography I know. You won't find a lousy or uncommitted performance in his acting career. He just has the gift, and like many people who have the gift, he struggles with other things in his life.

Yes, I guess that's a good way to look at it. I have seen him in Law and Order, by the way - he was the only reason I ever watched it!